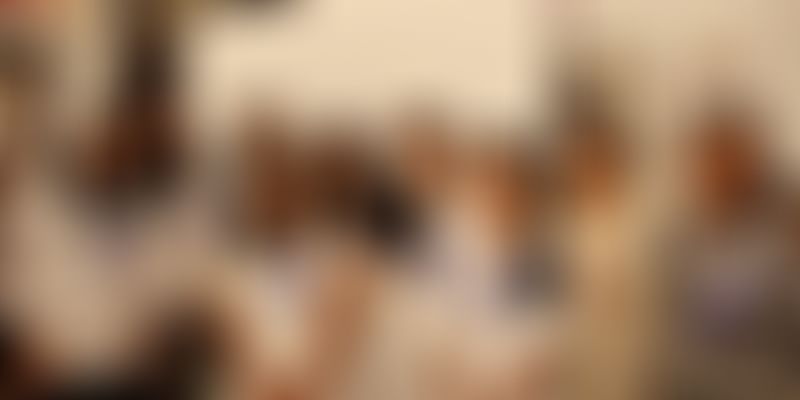 The team behind Swaraksha comprises a group of like-minded professionals who are united by the belief that armchair concern is not enough and every little action makes a difference.

It is heart-breaking to flip through the newspaper every day and come across a spate of news reports on little children being raped or sexually assaulted. While these incidents are shocking and disconcerting, what is unfortunate is that most concerned citizens do not think of what could be done to prevent them from happening.

Anu Suraj, Academic Co-ordinator and Co-founder, Swaraksha, an NGO based in Kochi, Kerala says: “Most often, when a crime happens, everybody discusses it for a while and then forgets about it. Many feel helpless and spend sleepless nights but do not come forward to take some sort of action. In 2014, my husband, Suraj, an IT professional came up with the idea of starting an NGO to deal with this issue. I realised that the problem must be tackled at the grassroots level. Swaraksha was established to create awareness of the various dangers faced by children, and educate them and their families on the importance of keeping the channels of communications open.”

You are your own bodyguard

Swaraksha took shape as a series of awareness campaigns conducted by the Swaraksha Charitable Trust, an NGO that aims to educate children, parents, teachers, and the general public about physical, sexual and emotional abuse against children. A small group of volunteers, mainly women, worked hard to create the materials for the campaign by pooling in their own money and resources. When schools started requesting tie-ups for multiple sessions, the team felt a need to expand. The cause also attracted a large number of volunteers. Today there are IT professionals, doctors, teachers, academicians, psychologists, lawyers, and social workers in the team.

Swaraksha has conducted various campaigns in schools, parent groups, churches, residential associations, Student Police initiatives and summer camps that have impacted over 5000 children. The team has also conducted sessions in schools for children with special needs.

Though Swaraksha was started with the intention of working towards prevention of child sexual abuse, as the organisation evolved, the team has expanded to multiple issues concerning children.

Audio-visual techniques and interactive sessions are used to educate children on how to distinguish between good and bad touch, how to stay safe online, how to build confidence and inner strength, be mindful, and face situations appropriately.

We cover a wide range of topics like child abuse and its effects, cybercrimes and prevention, the side effects of substance abuse, personal hygiene, personal safety, legal rights, and the minutiae of the POCSO act.

The talks are planned in an age-appropriate manner. For younger children, stories and fun videos with a message are used to impart serious messages. For older children, and for sessions organised for parents and teachers, in-depth discussions are planned. The team also produced Maya, a short film aimed at creating awareness and empowerment. The sessions are categorised according to different age groups; grades 3-5, grades 6-8 and grades 9-10. The content, presentations and AV material differ accordingly.

Also read: This organisation is changing the world for little children, one smile at a time

Swaraksha has a core team of seven trustees who are the office bearers and around 10 executive members as volunteers. Dr Renjima Kamal, Nandini Gopalakrishnan - an IT professional, Dr Vini Vijay, Sajina Arun - a legal professional, Anita Pradeep - a social activist and Ramya Durairaj - a teacher, along with Anu Suraj form the core team.

Swaraksha's materials have been reviewed by experts in related fields. The NGO has so far completed sessions in schools like Chinmaya Vidyalaya, Kidzee group, Nalanda Public School, Polka Dots Kindergarten, St. Raphaels church, Smrithi School for children with special needs, and Cochin Public School. Unlike the popular perception of the police force, the Kochi city police (SPC) has been very cooperative with the team and has even associated with campaigns conducted at institutions like the Backyard Arena, Rotary Cochin Cosmos, SDKY Gurukula Vidyalaya, Kidsworld Maradu and KIDS Kottapuram.

Research shows that most child abuse cases happen at home or in schools where we feel our kids are safe. Also, it has been noticed that most abusers get well-acquainted with the kids in the guise of being friendly. And it’s a myth that only girl children are being abused. The boys too are abused equally. We have been working hard to ensure perverts don’t get away with heinous crimes.

The campaigns are also aimed at building self-esteem and encouraging children to respect and show empathy for others. Subjects like stalking, bullying, peer pressure and ragging are also covered using case studies in the form of stories.

This year the team organised sessions for the staff at summer camps and day care centres for the first time. They were made aware of the need for having a transparent system at schools and other institutions, while involving parents proactively, so that crimes can be prevented. The sessions also emphasise on good child rearing practices that focus on the development of the personality of the child, avoiding corporal punishment and threats for behaviour reinforcement, and the importance of acknowledging and encouraging the child’s emotional needs.