GingerCup is making advertising engaging, one tea cup at a time 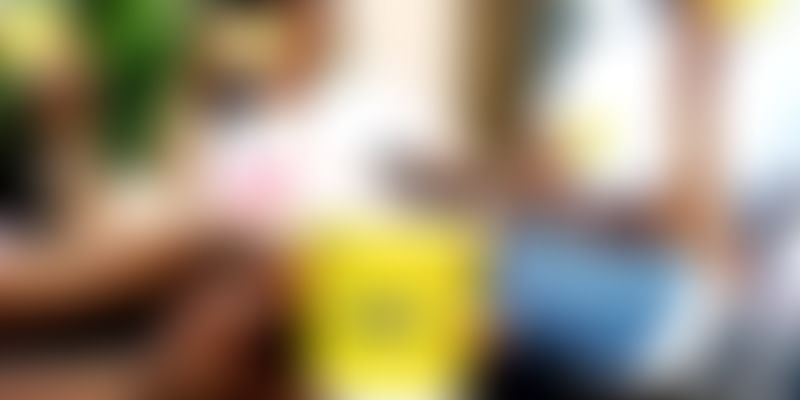 Paper cup branding is an untapped sector in India. This Bengaluru-based startup is out to change that.

In an era of reduced attention spans, marketers and advertisers are increasingly looking for innovative ways to reach their consumers. Breaking the clutter is imperative, as more and more products hit the market at the speed of light.

One such startup that is helping brands achieve this distinction is Bengaluru-based GingerCup which prints brand logos and taglines on paper tea cups, and distributes them across colleges, offices, hospitals and food courts. In two years, it has distributed over 35 million ‘branded’ paper cups across 23 Indian cities.

GingerCup, as a concept, originated an afternoon in 2015 when co-founder Deepak Bansal took a tea break in the middle of work. An IT professional for eight years before he started GingerCup, Deepak, while enjoying his little chai time at the local stall, observed that those gathered for tea were involved in passionate conversations on topics that ranged from politics and sports to entertainment and gossip.

Though the time spent at the tea vendor was short, the level of engagement was high while people drank out of plain white paper cups.

It struck Bansal that attention levels were high because there was nothing else to distract people when they were on that short break. If the paper cups had something printed on them, it had the potential to trigger a conversation. What if it was a brand logo? Or a tagline? Would they be noticed and identified? Would they be remembered when people walked back to their work desks?

Deepak and his wife, Devleena, who was an HR professional then, decided to test the concept. First, they researched paper cup advertising, and discovered that though it was underutilised in India, it was an established branding proposition in the West and in Australia. In some cases, paper cup campaigns had even recorded higher engagement levels than traditional advertising had managed.

Buoyed by their findings, the husband-wife duo bought a few thousand paper cups, printed some logos on it, and distributed them across offices, college campuses and local tea shops in Bengaluru. Shortly after, they surveyed the crowd at these places, and discovered 86 percent were able to identify the brand logo they spotted on the cup, and 70-75 percent could recall the communication displayed too.

That was it. Deepak and Devleena knew they had cracked a business idea.

“When people go on a tea break, they don’t want to discuss work. There is an exposure window of five to seven minutes, and sometimes even ten minutes. Visibility and engagement are more. It is a great place to plug a brand."

Sample this - an average television commercial is for 20 to 30 seconds, the average billboard has five seconds or less to display its message to the passerby and a digital ad is avoided with ad blockers. Also, a newspaper advertisement may not even be looked at.

A paper cup, on the other hand, has a potential customer engaged because it is colourful, appealing, and filled with tea that takes at least five minutes to finish. “Hence, it is a very effective medium to get the message across and start a conversation around the brand. The cost incurred is also very low and you’re getting more out of each customer,” Deepak explains.

“And, India is a tea-drinking nation. You don’t really have to worry about the audience because everyone drinks tea, irrespective of who they are,” he adds.

What it has done so far

“Our competition is the big agencies. While they aren’t into paper cup advertising yet, they will get into it, and stop their clients from approaching us,” Deepak states.

How easy or difficult was it to get brands to adopt?

“The startups were more open, and our execution time was also less. But we had to really educate the big companies and convince them that this mode of advertising actually works,” Deepak says.

The cost of sourcing a cup, printing a brand message on it, and distributing it in the desired location is about Rs 2. However, a brand typically looks at Cost Per Reach (CPR) — a critical metric in advertising. Since one paper cup is typically viewed by five to six people, the CPR is 30-35 paise. That is meagre, compared with the thousands of rupees spent on traditional media advertising.

GingerCup started out with a seed investment from two angel investors - Sanket Gupta, Programme Lead at Google US, and Rahul Shah, Technical Lead at Ola. While GingerCup refuses to divulge numbers, Deepak confirms it is “managing expenses” well.

“I loved the idea. My vision for GingerCup is to see it as a technologically robust platform in the world of advertising. The market for innovative advertising is huge, but it is an untapped sector. I do believe the marketplace for cup branding will continue to be strong and popular and it is scalable in India as well as the global market.”

To this, Google’s Sanket Gupta added, “I think it is an innovative business model with a good upside, and is showing strong traction.”

One of GingerCup’s recent promotions reads, ‘a lot more can happen over coffee’. Surely, advertising can happen!