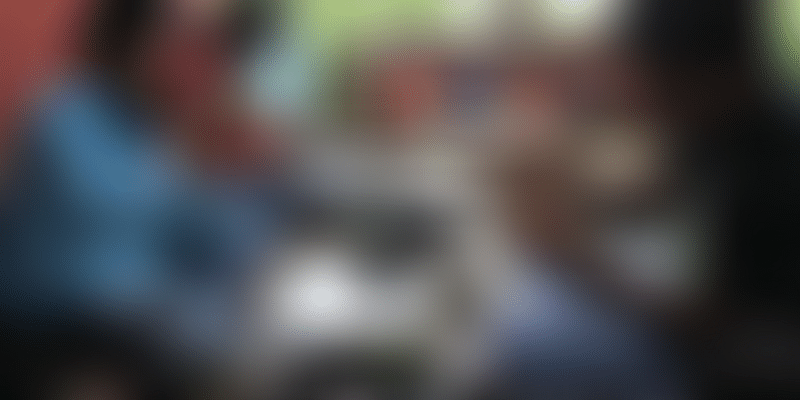 Located in the scenic hill station of Panchgani in Maharashtra, is a haven for rural artists and craftsmen. Devrai Art Village, founded by Mandakini Mathur (57) and Suresh Pungati (34), is a place where artists can practise their craft, train apprentices and students, and create an environment for the preservation of the Adivasi culture.

Mandakinisays, “If I think of the inspiration for Devrai Art village, it is the old tree of Ficus Glomerata (Umbar) in our garden, which created an inviting space under its canopy. Its spreading branches almost touching the ground made a natural cave of green-dappled light. This magical space was an invitation to sit under the tree, and soon a platform was created.”

Suresh, an Adivasi artist from the Madhia tribe, decided to open a space for art and craft work. And that’s how Devrai Art Village came into being, after the monsoon of 2008, with five Adivasi craftsmen with the desire to connect with nature and celebrate creativity.

Suresh has a passion for community development and was awarded the ‘Adivasi Sevak Puruskar’ by the Government of Maharashtra in 2002. He is the only person in his village who works as a teacher and is making all effortsto educate the locals, and expose them to more opportunities in terms of what they want to do.

Raised in Baba Amte’s ashram in Anandvan, he comes from the Naxalite-hit district of Gadchiroli in northern Maharashtra, where Adivasis are often caught in the crossfire between the state and the insurgents.

Bringing in his experiences and expertise, Suresh envisaged a place for Adivasis to practise their craft away from their difficult lives, and also from the Naxalite-hit regions of Gadchiroli and Chhattisgarh.

“We welcome the youth as apprentices so that the traditional art continues with the younger generation as well. Now we have artisans from Chhattisgarh joining us," says Suresh.

"Devrai Art Village strives to empower the craftsmen by giving them new design ideas and marketing possibilities. More than that, we seek to nurture a way of living where nature is not looked upon as a mere resource, but where plants, animals and humans are seen as interdependent and where art can reflect the sacredness of nature.”

Devrai Art Village has been able to generate about Rs 3-4 lakh per month. Although it is touch-and-go each month, the team sure is proud to say that they have sustained themselves for about nine years without any donations or help from the government.

Many of them at the Devrai Art Village, especially the interns, are first generation craftsmen. Several of the young men would possibly have been forcibly recruited by Naxalites had they not come here.

Earning potential in their respective areas is very limited as there is little work. If they do their traditional dhokra work, they get poor rates, often selling the pieces according to how much they weigh. With Devrai Art Village,they are assured of a steady income to send home to their families every month.

“We especially focus on training Adivasi girls; we now have eight such trainees in our team. Sonki Katlami, who came to us as an intern, is a confident young woman and a master craftsman who trains others."

"We are now collaborating with the Forest Department and will soon open a Devrai Art Village branch in Gadchiroli to train the locals there itself,” says Mandakini.

Devrai Art Village is a self-funded initiative, and believes in empowering craftsmen and acts as an environment to facilitate their interaction with design schools, and resource persons from other areas to enable the cross-pollination of ideas.

It also acts a place for craftsmen to facilitate direct interaction with customers in order to obtain insights into the marketing and sale process.

It has allowed Adivasis to explore linkages between indigenous art and nature. It hosts a training centre where the craftsmen induct and train apprentices, students, and local people.

“Apart from sustaining the heritage art of metal casting using the lost wax technique by constant innovation in technique and design, we are also trying to help the Adivasi artist by offering him/her a livelihood option,” says Mandakini.

“The unique and distinctive style of our product range comes out through combinations of different mediums such as iron, brass, stone, wood, bamboo, and fabric,” she adds.

Some of the other forms of artwork that the craftsmen here have primarily been working on are the dhokra metal casting, beaten iron work, bamboo, and woodcraft.

One of the main objectives of the art village has been to document and explore, using the film medium, the tribal way of living, the beliefs of the Adivasi culture, crafts and work processes to spread awareness and for use as teaching aids.

Devrai Art Village is constantly experimenting with new design ideas and mediums as well. Most of the inspiration comes from observing, or rather communing with nature. The art village strives to kindle love and respect for nature through art.

“In the true spirit of a ‘Devrai’,or a sacred grove, the centre is trying to nurture a variety of plants, shrubs and creepers so that it offers a glimpse into a way of being where the man-nature connect is not severed under the onslaught of modernity,” says Mandakini.

The art village has retail stores in Pune, a museum shop in Mumbai, and participates in exhibitions and festivals in cities like Mumbai, Pune, and Ahmedabad. The team has trained around 45 craftsmen, and has 35 craftsmen working with them.

At the art village, there are students from design colleges, architectural colleges, art and craft colleges, and even school students who take up internships and residency programmes.

“Looking at the near future, we are planning to open up another centre in Gadchiroli so that more and more Adivasis canhave access to such opportunities,” says Mandakini.