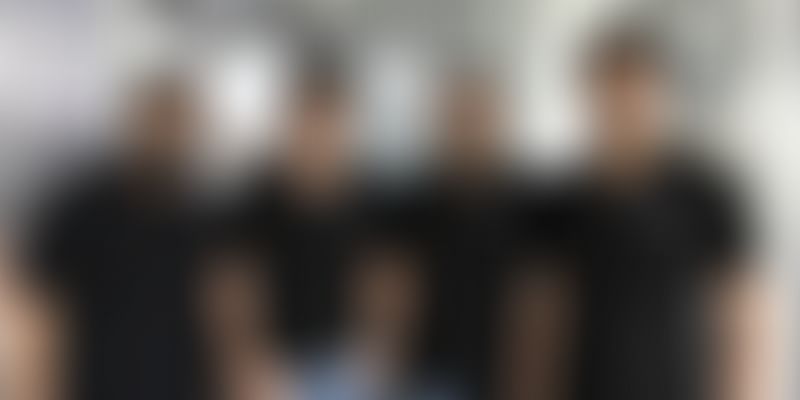 The Indian startup ecosystem has plenty of stories of ex-Flipkart employees moving on to build their own startups. Adding to that legacy are Lalit Keshre, Harsh Jain, Neeraj Singh, and Ishan Bansal, who in 2016 quit their jobs to start up in the wealth management and investment space through Groww.

So, what pushed these Flipsters to change direction from day-to-day e-commerce and chart a path in a completely new industry?

As I sit in to understand more at their 91Springboard office, Harsh corrects me,

“We haven’t moved out completely of ecommerce if you see. The idea of Groww is to buy financial products the same way you buy products on Flipkart. And building such a platform requires the same customer-centricity along with technology.”

If you’re tuned into startup jargon, you’d know that’s what a Flipster sounds like, especially with the words “customer centricity” and “technology”.

Apart from Flipkart, another common connection between all the founders is Lalit.

Lalit and Harsh have known each other since 2003; they met again while working at Flipkart in 2012. While Lalit and Neeraj at some point were looking at hyperlocal services within the Indian e-commerce behemoth.

Ishan was the finance guy, who was looking at deals and acquisitions in Flipkart. He met Neeraj and Lalit while looking at a couple of deals in the company.

How did they all coalesce in an investment and wealth management company?

“Coming from a similar background, we thought of what else could e-commerce disrupt. Looking at the Indian investment scenario, we thought that households had the necessary capital but weren’t essentially investing in wealth products. We chose to dive in looking at the market opportunity.”

Groww was incorporated in 2016, but the final product was launched only in 2017.

Over the past two years, multiple players have announced their entry into the wealth management space. The recent movers in the space have been Indian financial payment leaders like Paytm and Flipkart-owned PhonePe, which have disclosed plans to introduce selling financial products on their platform.

To this, Neeraj says, “We understand competition. Even Flipkart wasn’t the first ecommerce company to be started in this space. Moreover, big players entering the space only give our idea more validation.”

A lot of the company’s differentiation lies in the offerings of the product.

Once the customer joins the platform, they are on-boarded by a paperless process. Further, unlike other new investment platforms, where customers are asked about their goals, Groww provides readymade tailor-made used cases comprising of investment options. There were close to 2,000 used cases and tailormade plans on the platform, as of last month.

Explaining why the platform took this approach, Harsh says: “Investment as a product itself is difficult to understand. The investor has his or own set of questions. So platforms like ours should be answering customers’ queries rather than bombarding them with more questions.”

Harsh and Neeraj explain, “We feel that people find it easier to invest once they consult their peer groups. And that’s why we introduced a community-based model.”

As of last month, the company claimed to have more than 35 WhatsApp group with investors.

Talking about numbers, the startup claims to have close to 200,000 unique visitors on its platform. The average ticket size on the platform is around Rs 8,000. Groww also claims to be growing 35 percent month-on-month since their launch in April 2017.

From April to December last year, the company claims to have processed close to 1,00,000 transactions on its platform.

At present, Groww claims to have close to 34 mutual fund houses listed on their platform, barring one. This equates to more than 5,000 mutual funds on the platform.

Speaking about the revenue, Harsh says the company makes revenues from commissions received from various mutual fund houses, which are to the tune of 1 to 1.5 percent on the AUM (assets under management) handled by the platform. This is essentially a distributor or service provider fee.

In the end of January, Groww had raised an undisclosed amount of funding from Y Combinator; Mukesh Bansal, Founder of Myntra and Curefit; and Ankit Nagori, Co-founder of Curefit, and ex-Chief Business Officer at Flipkart.

During the investment, Holly Liu, Partner at Y Combinator and Co-founder of Kabam said, “I cannot think of a better way to empower the growing group of Indian millennials than by enabling them to make financial investment choices that are more accessible, faster, and cheaper than traditional banks. Groww's product does just that. The product is built from a team with the right expertise and the right experience to tackle this large opportunity.”

Commenting on the future, the founders shared the long-term vision of being a complete financial ecosystem, and adding more and more products to the platform.

However, the immediate goal for the startup in the coming fiscal is to add direct plans to the platform.

“We will be heavily relying on feedback from the community on what they would like on the platform.”

Another sector apart from lending which seems to be getting investor and customer attention In Indian fintech is wealth management. Just last month, Indian payments leader, Paytm also officially announced its foray into the space through its investment and wealth management division, Paytm Money.

During the announcement, Paytm Money was seeking regulatory approvals from SEBI to commence operations.

At present, India claims to have close to 15 million mutual fund investors in the country. Some of the other startups operating in the space include Kuvera and older players such as ScripBox and FundsIndia.