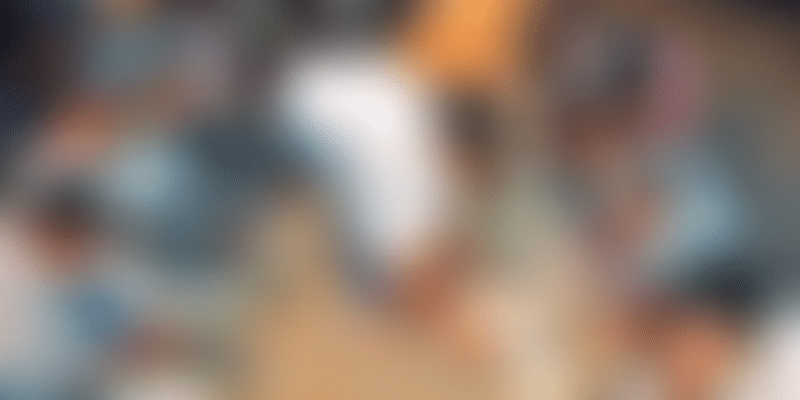 Who hasn’t had a hungry person come up to them outside a restaurant or café, seeking food? What do you do? Feel guilty and turn away, or blame the person for not doing an honest day’s work? Hyderabad-based Syed Osman Azhar Maqsusi decided he would do nothing of the sort and got down to work with a free food camp.

Azhar, who saw that a large number of poor and destitute people in and around Malakpet station and Chanchalguda were going hungry each day, set up his daily food camp under Chanchalguda flyover almost six years ago. Things were set into motion when he saw Lakshmi, a physically handicapped woman begging near the railway station.

In an interview to Deccan Chronicle, he said,

My father died when I was very young and my mother raised all of us with great difficulty. I know what it is to sleep hungry.

Third among four siblings, he had dropped out of school when he was in Class V and started working as a labourer. “We used to live in my grandfather's house. He also had a big family to look after. We used to get food once a day and sometimes even that was not available,” he added.

Cut to the present. “Lakshmi was crying due to hunger. I arranged food for her and decided to do everything within my limited means to remove the hunger of as many people as possible,” he recalled.

Azhar’s biggest inspiration is his mother, who struggled to bring them up, and he strongly believes that Allah is arranging food for the hungry and the needy through him.

He began on a small scale; his wife used to cook the food at home and he used to take it to the flyover and serve those who needed it. Later, he decided to set up the cooking unit under the flyover to save on transportation costs. They started “with 30-35 people and today more than 150-200 people are provided food in Hyderabad,” said Azhar, who now runs the Sani Welfare Foundation and has hired two cooks.

Every day, as the clock strikes 12.30 pm, Azhar appears and starts serving piping hot rice and dal. Beggars, labourers, and ragpickers line up with their plates to get a good meal.

Azhar runs a plaster-of-Paris unit near Dabeerpura, spending a few hours every morning and evening there. “The rest of the time I spend in arranging food at both the places,” he explained. Seeing his unflinching dedication, people, including his brother, his cousin and a couple of volunteers on weekends, also line up to help. Azhar, however, does not collect funds.

If people come with donations in the form of rice and dal, I accept it. I don't accept cash unless the donor is not in a position to bring rice or dal.

Azhar now also serves people food at Dabeerpura flyover in the old city. His work has also been extended to Gandhi Hospital, the biggest government-run facility in Secunderabad, and he transports food in a van for 150-200 people every day. The foundation has also tied up with NGOs to run daily food programmes in Bengaluru, Raichur, Tandur, and Guwahati.