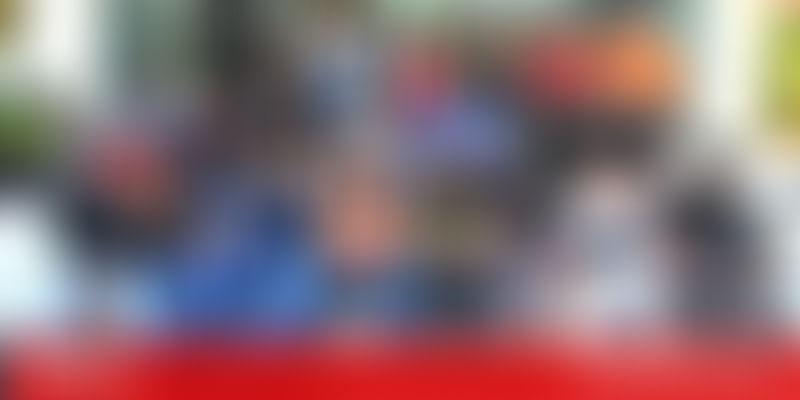 BTech graduates Osama Raushan and Anil Shaw realised early on that India lacked when it came to hardware development, but it took three years of working in a corporate setup for them to realise their calling to start up. Their venture, TenPi Technologies, is an end-to-end IoT solutions company, with various products and services in that domain. It works on the mantra of co-innovation where it co-innovates with clients in a unique lab-as-a-service model.

Kaizad Hansotia's was looking to start up on his own, and inspiration came from his sister Dilshad, who had studied fashion design and dreamt of starting her own label. Kaizad saw how challenging it was for Dilshad to design ensembles every season, and simultaneously sell them in a short period of time. With the idea of supporting upcoming fashion designers and connecting them with the right consumers, Kaizad launched online platform GetNatty on Women’s Day in 2016.

Brothers Love and Kush Beejal started NeoStencil in 2014. The edtech startup, through its live-learning platform, provides online classes conducted by individual teachers and educational institutions, for various competitive exams such as IAS, IES, GATE, and state PCS (provincial civil services). All a student needs is an internet connection, and a computer or a smartphone. Everything else - from study material to mock-exam evaluations - is taken care of by NeoStencil.

Anirban Das Blah had initially started Kwan to focus on getting endorsements for celebrities, but later moved to managing the celebrities themselves as the former was not scalable. Today, Kwan is a marketplace model that helps bring celebrities, brands, producers, directors and television shows together. It has 60 directors, and has worked on 30 films and 20 television shows.

Bengaluru-based Mymo Wireless Technologies aims to create original IP in 4G and 5G technologies. Co-founder Madhan Babu Sondur says he believes in India’s product story, and wants to be as big as Qualcomm. Mymo offers solutions on air-interface and protocol-stack for LTE User Equipment with customisation support for IoT, M2M, and high-speed dongle markets. Simply put, the company's IP enables carriers to serve customers faster, and internet users can get faster services thanks to speeds of more than 20mbps.

Eight years ago, commerce graduate Yusuf Nalwala weighed 140 kg. Today, he is one of the prominent celebrity fitness trainers in Mumbai, and the founder of a startup that caters to consumers who want healthy food. Yustrength provides subscription-based meal plans to clients on a daily, weekly or monthly basis. The subscription meal plans are different for every client and are made specific to people looking to lose weight, to gain muscle, or to simply eat healthy.

Esha Gupta, worked with her father Dinesh Gupta, Chairman of Prabhatam Group, in media and advertising but eventually, she followed her real passion – fashion. The House of Zeniaa aims to provide modest wear for today’s Muslim women who want to remain close to their religion and follow trends. Since the abaya category does not have any premium brand from India, this was a great opportunity to explore.

Food tech is a buzzword in the Indian startup ecosystem, and the focus still rests firmly on B2C, with only a handful of B2B food startups making waves. Husband-wife Yogesh and Payal Ghorpade identified a gap between a restaurant’s backend and its customer-facing operations, and started to build a product that could bridge it. Uplodefoodie is a software solution that makes the end-to-end restaurant and outlet management process much simpler, and helps food-service players optimise their costs.

Eklovey Verma started Creating Talks in 2017. As a final year student at Delhi Technological University, Eklovey had led the core team that organised an event at IIT Delhi, where eminent public figures spoke and shared their experiences with the audience, and seved as the inspiration for Eklovey. Creating Talks, simply, is a platform that helps people strike conversations. These could be online, or offline, in a small focued group, or one person speaking with a large audience. Conversations revolve around topical issues and help participants find insights that could enrich their lives.