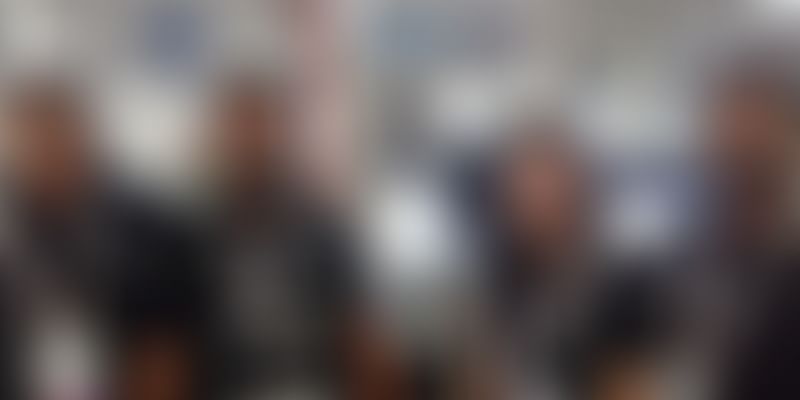 In this edition of PhotoSparks, we showcase some of the startups exhibiting at Product Conclave 2018, along with NASSCOM insights on India’s IT product ecosystem.

NASSCOM’s annual Product Conclave (NPC), held in Bengaluru, is a regular draw for product innovators in large corporates as well as fledgling startups. See also our earlier startup showcases from NPC 2017, and YourStory’s TechSparks 2018, 2017, and 2016.

The report says that over 1,200 startups were added in 2018, and eight companies joined the unicorn club in 2018, the highest addition in a single year, taking the total to 18. Total funding received by startups in January-September 2018 was $4.3 billion, the report says.

Startups in AI reported 120% funding growth this year, with over $150 million invested in 2018. “The need of the hour is AI in natural language processing,” said Debjani, referring to the next wave of Indian language content and applications.

The base of advanced technology startups grew by 50 percent from last year. Bengaluru ranks among the Top Three cities in the world for launching tech startups, according to the report; its highlights were presented at the NPC press conference. Global startups like Grab (Singapore) and Go-Jek (Indonesia) are coming to India for talent. Indian B2C startups are also expanding globally.

There are now over 210 incubators and accelerators active in India, with a year-on-year growth rate of 11 percent; 70 percent of them were founded in the last three years. (See YourStory’s Startup Hatch series of accelerator and incubator profiles.)

Other trends to watch are the dropping costs of headsets for AR and VR, which bode well for startups in this sector, observed Ravi Gururaj, NASSCOM board member.

Successful Indian entrepreneurs are also becoming angel investors. The gender mix of founders has increased to 14 percent women, up from 11 per cent last year, but much more representation is called for. Concerns have arisen over the decrease in seed stage funding.

The government too needs to open its procurement to more product startups. More mentorship support is needed in incubators and accelerators. Advanced tech startups could do with more assistance in certifications and patent filing, as well as global marketing (Japan’s JETRO is a good example in this regard).

There was also animated discussion at the press conference on the status of Indian regulations related to IPOs, data privacy, Aadhaar, and cryptocurrency, particularly in light of the recent arrest of Unocoin co-founders.

Debjani called for a more flexible regulatory framework in India that allows for experimentation so that the impact of technology can be better understood. Such a “regulatory sandbox” creates space for exploration, since technology and business models for large players and startups are changing rapidly.

“Co-creation is a completely different kind of business model from what India is used to,” said Debjani. However, startups need to work within existing legal frameworks while also continuing to push the frontier in terms of opportunity and transformation, added Ravi.

Now what have you done today to dream, dare and do, and bring your ideas to fruition on a large scale?