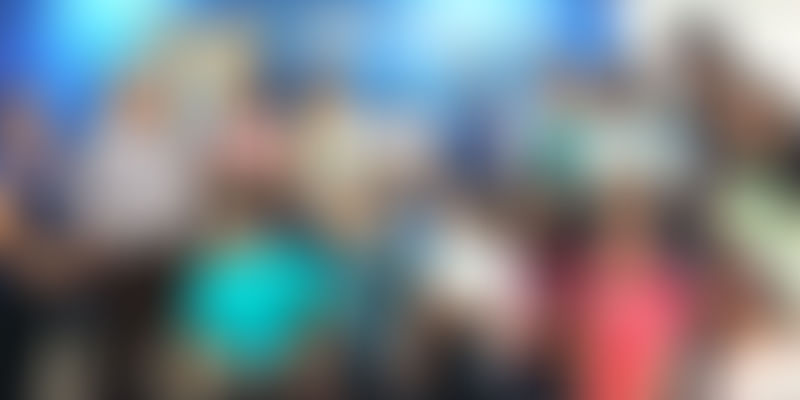 Local discovery, rewards and commerce platform magicpin has hit the right spot between online and offline, and is seeing month-on-month downloads growing over 50 percent.

Magicpin is a local discovery, rewards and commerce platform, and was founded in 2015 by Anshoo Sharma, an ex-investor at Lightspeed Venture Partners and Brij Bhushan, ex-investor at Nexus Ventures.

The duo was keen to build a company that would transform the offline retail sector with technology.

Repeat customers and a consistent footfall are every retailer’s dream. Yet, offline retail is under-penetrated by technologies that can help achieve this goal. “There are many technology solutions for online players, but almost nothing for the offline space,” says Anshoo, Co-founder and CEO of magicpin.

In three years, magicpin has garnered 800,000 merchants and claims to drive close to two million transactions, and a Rs 200 crore GMV every month. The team says it has witnessed a 5x year-on-year growth. According to a Crunchbase report, the startup sees a monthly download growth of 53.97 percent.

Bejul Somaia, MD of Lightspeed India, said “It is a big market. The platform and the business model is working and scaling. Anshoo, Brij and the team are fantastic and pioneering a new model to connect smartphone-wielding consumers with the offline economy.“

The team says that the engagement rate of the platform is currently averaging at 28 sessions per month, with users spending close to 30 minutes on the app every day, and doing over six transactions in a month.

In a statement, Ravi Mhatre, MD of Lightspeed Ventures, said,

“We are excited to back magicpin in building India's largest platform for driving business to offline retailers. The company’s unique and successful approach to connecting users, merchants and brands is reflected in exceptional growth and engagement metrics across merchants and consumers.“

The play of tech in the offline world

Anshoo says the need to integrate technology in the offline retail market led to the company’s growth.

“Nearly 95 percent of this trillion-dollar market is offline and everyone has a smartphone. This gave us an idea to change the way discovery and transactions happen in the offline world. We knew there were a few global models attempted in this direction. Even in the Lightspeed portfolio, there were a few like Meituan in China, who followed that model,” says Anshoo.

He says for this model to work in India, the discovery layer has to be a far more engaging concept and leading with discounts wouldn’t help. The idea was to start with one smartphone at the centre of everything.

Magicpin initially started on WhatsApp, even though they knew they had to build a strong technology layer. But they wanted to first understand the needs of the retailers and help them connect with consumers.

“We decided that we wouldn’t integrate with the PoS of a retailer for transactions, but allow a user to validate them using the app at the point of sale itself. This allowed us to close the loop on any retailer in the city. The moment we would launch in a city, we would be active across the whole city,” says Anshoo.

Initially, they started with the food and beverage segment. “When we started with McDonald’s, they initially gave us four outlets and now, in two years, we work with them in the south and west regions. We are present in all metro cities,” Anshoo says.

Some of magicpin’s other clients include Taco Bell, Beer Cafe, and Hard Rock Cafe.

Users typically share their experiences across different categories like restaurants, fashion and beauty through pictures. Posts by other users inspire them to discover and try new experiences with the added benefit of rewards for spending at participating merchants.

The platform uses location intelligence to give users information, recommendations and rewards on different retail experiences. The startup then provides merchants with consumer data as well as a dedicated marketing platform to help and encourage repeat buying.

“Since we were taking this directly to the user and not focussing just on card transactions, we could take this a layer deeper into the cash economy. This became interesting as it helped us increase the basket size and user spend. This also got us a lot of stickiness,” says Anshoo.

As the name suggests, users can take “quests” ranging from finding flying beer mugs to dancing burgers within the merchant’s premises - all on the app.

On completing the quests, users get instant voucher codes that can be exchanged for real goods at the store counter.

Apart from technology, content is another key aspect leveraged by magicpin. Anshoo explains that the idea of taking a selfie and sending it to a retailer played an interesting role, and helped the team show a merchant’s value.

“There is an emotional connect when a merchant sees a picture of his customer with a willingness to connect. It also helped us form patterns and tell stories,” says Anshoo.

Users can also engage with others through recommendations, check-ins and live feeds.

This helps create engagement. Anshoo says, “The user gets to understand places their friends spend time at or hangout, and who the other interesting people in the area are.”

“The idea is to put together a model for commerce that is moving fast and capital efficient. Data exchange is at the centre of it. As the user base started to grow, we started to understand what the consumer needs and what they spend on, and this helped us create user interest graphs,” explains Anshoo.

The startup has managed to survive with a strong background in technology and by understanding their target market.