"Nature inspires us to learn and be better."

Drones and automated surveillance machines are slowly becoming integral in various areas of Applications. As the saying goes, “Any object that simplifies the tasks of a human in doing some meaningful work can be termed as a machine.” Similarly, drones are automated machines that are made for the basic purpose of surveillance through human control. The human control part is done through commands or instructions.

There are many types of drones like land drones , aerial drones, quadcopters , aquatic drones and also sophisticated military drones like the Predator drones of the US Air Force which even have the capabilities of destroying hostile targets.

Recently, scientists and researchers are exploring a completely different type of drone called as a Snake Robot or snakebot in short.

Snakebot is a name given to a robot which looks like a snake in appearance and also move like it. Snakebots are modular in nature i.e the robot is made up of independent parts or modules which are connected to each other and the controlling head through links(Imagine this like a train , where the cars are connected to the engine through links). The robot follows a principle called as a ‘Master-Slave principle’ where the head is a master and controls all other modules.

This topic of research has many potential applications, one being low cost and durable surveillance. Currently, the subject is a topic of extensive research amongst renowned institutions like NASA, MIT USA and Carnegie Mellon University.

The reason for such a spurt of interest in researching about the applications of these bots is this; as we know, nature has made us learn science through its wonderful creations, actions and phenomena. While looking for building new and better types of robots, researchers saw something in snakes that inspired them to think differently. The common feature of these slithering serpents was shape manipulation. Snakes can coil, elongate and adjust their shape to fit into a variety of spaces. By alternating their movements, snakes are able to tackle different terrains and inclinations effectively. It would be highly deployable if we could imitate such movements and flexibility to our robots. The arrays of functionalities are boundary less.

Currently all test subject snakebots vary greatly in size and design, but there are two qualities that all snakebots possess. First, their small cross section to length ratio allows them to move into, and maneuver through, tight spaces. Second, their ability to change the shape of their body allows them to perform a wide range of behaviors, such as climbing stairs or tree trunks. Additionally, many snake robots are constructed by chaining together a number of independent links. This redundancy makes them resistant to failure, because they can continue to operate even if parts of their body are destroyed. Properties such as high terrain ability, redundancy, and the possibility of complete sealing of the body of the robot, make snake robots very interesting for practical applications.

Snakebots are currently being researched by NASA for exploring Mars. Carnegie Mellon University has developed a thin cross section prototype that can be used in medicine for surgical purposes. The Israeli Army uses Snakebots in assault and for detecting landmines and buried explosives. The American law enforcement is testing prototypes for Policemen to use in situations like riot control and violent animal encounters. This is interesting as they have used Taser guns with these bots so that the rioter or aggressive animal can be subdued in a non-fatal manner. Some snakebots who possess the ability to dive are being sent underwater for exploration.

Perhaps, a noble use of this robot is rescue operations during disasters. Snakebots can go under debris with required sensors and help track survivors who are in dire need of rescue. Since time is precious, as soon as the snake identifies a survivor, it could send a GPS signal along with its current coordinates to a rescue team who on receiving the signal will go to the exact same place as the survivor and rescue him. In this manner, many lives can be saved in a lesser amount of time.

The sky is the limit for research. The amount of interest Snakebots have generated is exceptional.

I thank and I am grateful to my Research team, CSI-RAIT consisting of my colleagues, 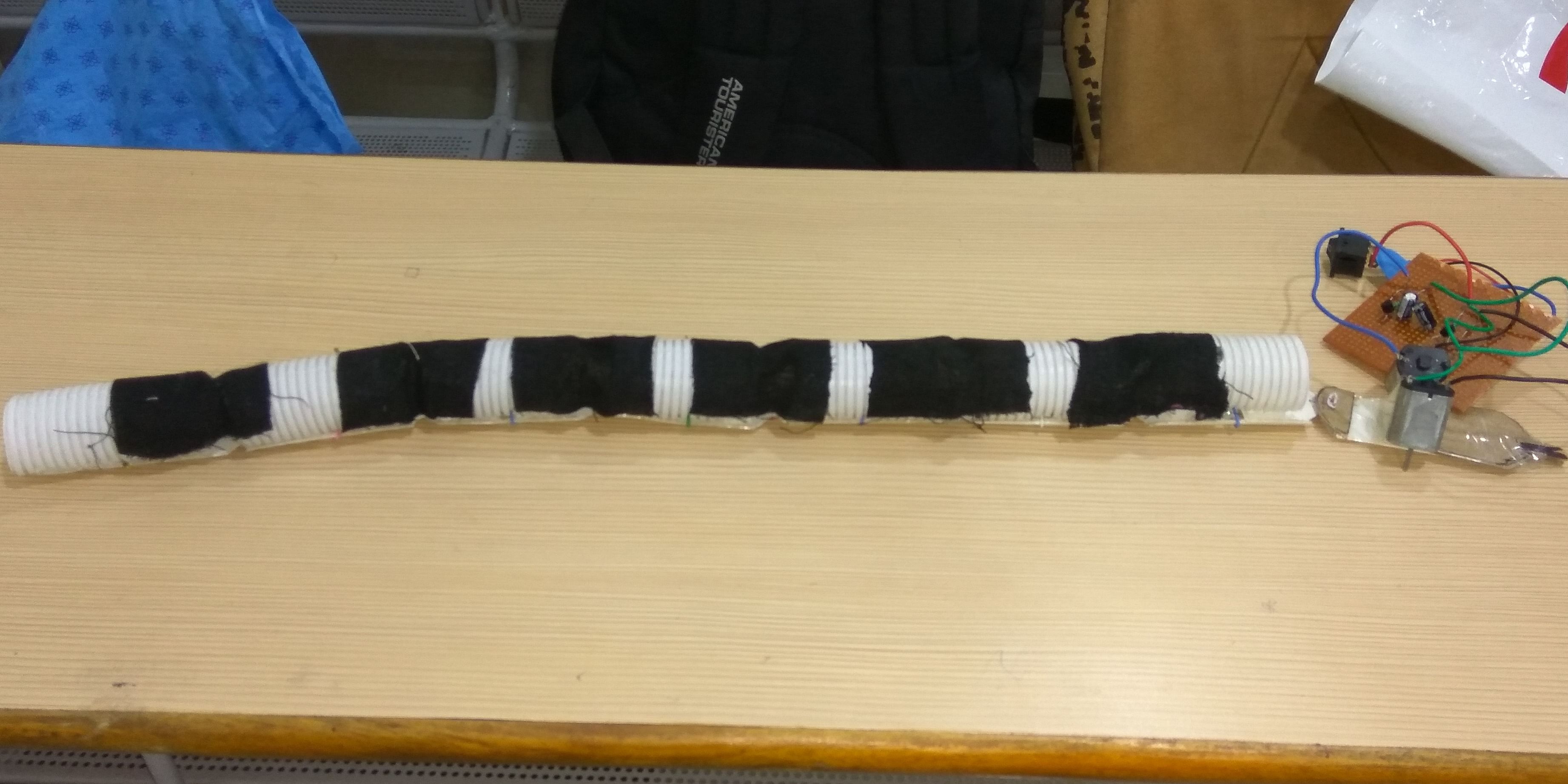