Back to the roots: how this techie-turned farmer helped villagers embrace organic farming in Maharashtra 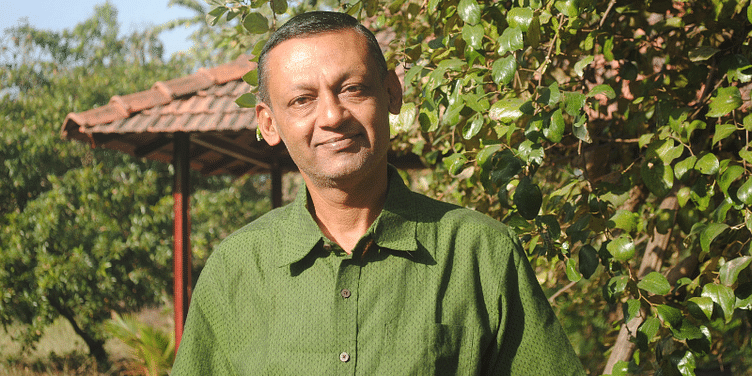 Fifty-three-year-old Venkat Iyer quit his lucrative job as a Project Manager at IBM, went on to convince 70 adivasi farmers to take up organic farming, and even helped them market their produce.

How often do you come across a person who has the fortitude to quit a high-paying corporate job to make a difference to the livelihood of farmers? Well, not every day.

Venkat Iyer was leading a comfortable life in Mumbai. He was at the peak of his career in his role as Project Manager at International Business Machines (IBM) when he resigned from his position.

“I was always inclined towards agriculture as an occupation. However, the state of the industry in India has been grim. Though it is considered a mainstay in the country, many farmers are known to have sold their land and moved on to become daily wage laborers due to poor income. Hence, I decided to do my bit to help these farmers improve their earnings and reap the benefits they deserve,” Venkat Iyer tells YourStory.

In 2003, Venkat left Mumbai and went to Peth, a village in Palghar district of Maharashtra. Venkat wanted to learn farming before setting out to help other farmers. For this, he started reading books about organic farming and learning farming techniques from the Internet. Through his wife Meena Menon, a journalist and author, he also got familiar with the benefits of organic farming and made up his mind to practice it.

A few months later, he bought a suitable piece of land spanning four-and-a-half-acres from his savings. After undertaking a great deal of research, he began tilling the soil and planting rice, pulses, spices, as well as some seasonal vegetables. Though he had to put up with failures like spoilage and loss of crop initially, he never gave up.

After carrying out organic farming for five years, he gained the confidence to train other farmers in the nearby district of Vikramgad. He started training four adivasi farmers, and now the number stands at 70. Not only did Venkat teach them the techniques of organic farming, but also devised marketing channels and selling points for their produce. Today, all these farmers are not only getting to earn more but are also producing more with limited resources.

These kids with learning disabilities are promoting organic veggies across Hyderabad, and picki...

Venkat was very excited to grow his own food after moving to Peth. Since many farmers in the region were growing moong (green lentils), Venkat decided to follow their footsteps. He made a quick trip to Surat in Gujarat to buy seeds since he heard from folks in the neighbourhood the city had the best quality of seeds.

Very soon, he was on the field tilling, sowing, watering, and weeding. A few days later, he was standing in the middle of moong crops with green pods handing from them.

“It was one of the most ecstatic feelings ever. It had been five months since I quit my job, but I felt the transition was turning out to be fruitful,” Venkat quips.

At the end of the harvest, Venkat had grown 300 kilograms of moong. Even after distributing it to his friends, he was left with a huge quantity of the pulse. Hence, he began selling the produce to retail stores in Mumbai. The market for organic items was still very nascent and most of the vendors were not willing to pay him more than Rs 16 per kilogram. Astonishingly, the same moong was sold at Rs 30 and above in the market.

“I did not have a choice but to finalise the deal with retailers. From then on, I tried selling through several channels of distribution – from specialised organic outlets like Navdanya and Green Current, to local vendors in Mumbai. Alas, I never got a fair price for my produce. That was when I realised the kind of hardship the farmers go through in India. Though the cost of labour, equipment, and other resources is borne by farmers, majority of the profits are pocketed by the traders and middlemen who simply pack the material and sell them to city dwellers,” Venkat explains.

Empowering farmers all the way

In 2009, Venkat started Hari Bhari Tokri, a venture to establish marketing channels for farmers. Also, with the help of a few friends and Dr ML Dhawale Memorial Trust, (a charitable organisation working in the healthcare space), he formed the Mumbai Organic Farmers and Consumers Association (MOFCA). The objective of the association was to give a voice to the agricultural sector and enable them to break away from the shackles of middlemen.

“Despite toiling day and night, most of the famers in the area were living in abject conditions. My urge to work for their welfare had increased over time. I wanted to do something to make their lives better. I got into training four adivasi farmers in organic farming techniques. Besides that, I began assisting them to sell their produce for a good price,” says Venkat.

Venkat partnered with vendors and consumers on the condition that the price of vegetables and pulses be determined by the farmers. For instance, if the farmer wants to sell bitter gourd at Rs 30 per kilogram, the vendor would pay the same to the farmer and then add the cost of handling, transport as well as the share of profit before selling it to the consumer. When it comes to delivery of the harvested material to consumers in Mumbai, MOFCA along with Hari Bhari Tokri provided for the necessary logistics in such a way that the cost of it was transferred to the consumer.

Today, Venkat has trained nearly 70 farmers and is helping them produce a whopping 1,000 kilograms of food every month. In 2018, he successfully tied up with schools and housing societies to sell the harvest. His efforts did not stop there. He made it possible for farmers to travel to Mumbai once a week and set up stalls to market vegetables and grains.

"I have been practising organic farming since 2009 with the help of Venkat Iyer and MOFCA. My soil quality has improved over the last few years. It is more humus and soft. I have also noticed a marked reduction in pests, especially after I started following mixed cropping and used plants as barriers to control attacks. And now, I am able to receive a good price for my produce and lead a life free of worry,” says Vishnu Bhoye, a farmer from Dapchari, Vikramgad district in Maharashtra.

After his adventure with farming, Venkat Iyer decided to document his journey in the book titled ‘Moong Over Microchips’. From learning organic farming and adopting its methods, to convincing farmers, training them and providing support to sell their produce, he has done it all.

“I can confidently tell myself today that it was worth quitting my job after all,” says Venkat.

Now, he is planning to rope in more farmers in the next few years, and wants to spread awareness about the advantages of consuming organic produce.