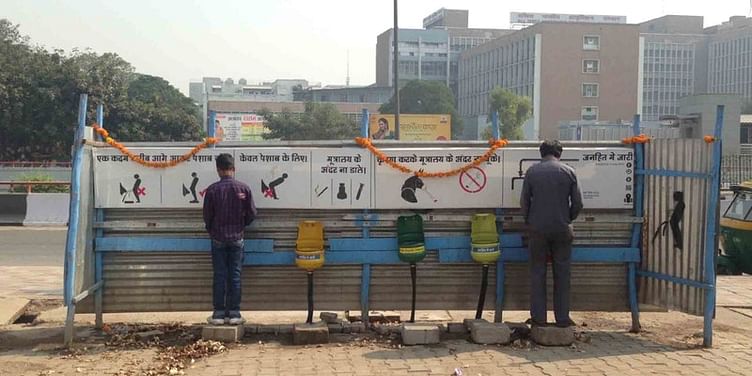 Across India, and even in metros like New Delhi, it is a common sight to see people urinating in the public. This situation is aggravated by lack of sanitation facilities, especially in public places. Despite efforts by the Central and State governments, there is not much improvement in this area. For instance, New Delhi, with a population of 18.6 million, has only 3,000 toilets for men and 30 toilets for women.

However, many NGOs and individuals like Ashwani Aggarwal, a Fine Arts graduate from Delhi College of Arts and Commerce, are trying to come up with innovative solutions to address this issue.

Ashwani along with his team members Aditi , Ashu , Yuva , and Sahaj, got an a idea to create a clean and safe environment for public sanitation by installing public urinals and toilets. They started Basic Shit in Dwarka, New Delhi, in 2014.

It all started when Ashwani took up a college project on sanitation in his college. During the research on the particular subject, he realised how dire is the sanitation situation in the city due to the lack of urinals, which made people urinate in the open.

Speaking on the same he said,

“I particularly wanted to address the issue of public urination, which affected me and others around me greatly in our daily lives. I realised that if urinals were installed in common urinating spots on the streets, people would use them. I needed a low cost, easy and portable solution, so I built it. I request you to help us ingrain the importance of hygiene among society and generously contribute to bring a change”, reports Indiegogo.

Besides, in terms of initial support, Ashwani along with his team participated in ABD’s competition. The theme of the competition was about finding a sanitary solution for the region, in which Basic Shit emerged as on the top three entries and gained some financial support for their project.

The eco-friendly toilet, PeePee, is made from single-use plastics dumped as garbage in the open and in landfills. Each PeePee toilet is made from 9,000 plastic bottles, also it doesn’t smell or require water to clean, or even a sewage connection.

The construction of a single toilet costs around Rs 12,000, and can be installed on-site within two hours. Ashwani, who is a designer and works in interior designing and graphic designing sector, uses the money generated from the work to fund his sanitation project.

The toilets are two integrated urine carriages with a capacity of 200 litres each, which collects the urine. On an average, each carriage collects 150 litres of urine per day from each installation, which is later stabilised and purified with activated carbon that helps in removing the toxic properties from the urine.

Once done, the urine is later recycled to extract urea and used for agricultural purposes. Also, the process helps the surroundings as the number of ammonia effluents in the nearby bodies are reduced, reports Efforts For Good.

For now, Ashwani wants to build 100 PeePee urinals, which will be installed on the streets of Delhi.

Disease patterns in India are shifting; are entrepreneurs prepared to fix healthcare in India?