Music to soothe the soul: Meet jazz vocalist Radha Thomas who brings a special seven-track album to the city 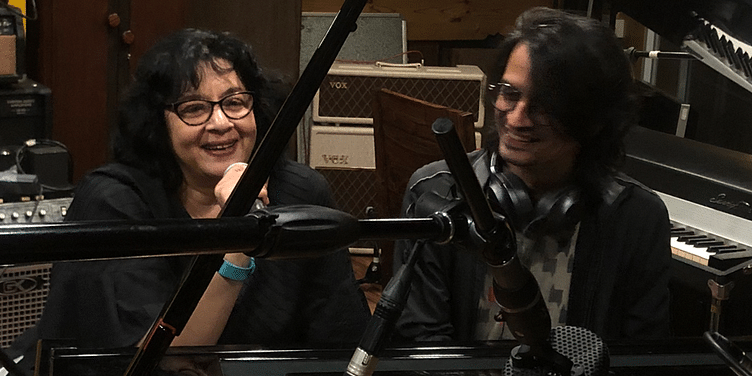 If you love jazz music, don’t miss a unique jazz album from vocalist, Radha Thomas and pianist Aman Mahajan. Here’s an interview with the talented duo behind this special musical collection

Radha Thomas, is one of the city’s best-known jazz vocalists, who interprets jazz in unique ways and aims at adding a new dimension to the art form. She is now out with her seven-track album, Bangalore Blues with Berklee-alumnus and piano player, Aman Mahajan, with whom she has worked for the past 10 years.

In an exclusive interaction with YSWeekender, Radha talks about her new album, with some inputs from her co-collaborator, Aman Mahajan. The well-known vocalist and author also talks about her literary career, her love for jazz and much more…

YSWeekender: Can you tell us about your new album?

Radha Thomas: Aman Mahajan and I have been collaborating for about 10 years now. In fact, our first album was released in 2012, called “I Only Have Eyes for You,” which is on Spotify and Amazon and iTunes and other platforms.

We’ve written many songs together. We picked a handful of them for this album, based on how they would sound in a duo format. We used a pure and organic way of performing a song. A piano and a voice. “Stripped down and bare,” is what Aman says. There are 7 songs in this album and each tells a different story.

Aman Mahajan: Radha has written beautiful lyrics to some of my piano compositions and also many of her own songs. Bangalore Blues is a 2020 snapshot of this music that Radha and I have made together over the past decade. The album showcases our instruments in their barest forms, without the accompaniment of a band. The songs have very clear strains of India in them, but are still jazz, as far as we can tell.

YSW: How did you go about bringing it out?

RT: There is this new record label in Bengaluru called Subcontinental Records with a very open-to-new-things owner named Arun Natarajan. He liked the sound of our music. So, we went to a studio in Mumbai, since there are no recording studios with real pianos in Bengaluru, and recorded all the songs in two days.

After that, Aman spent hours and hours mixing it with Sebastian Ohmert, our sound engineer in Germany. I had nothing to do with that. That’s why we make a good team. We have our own strengths and they don’t overlap.

AM: We decided that it was high-time we recorded this music in a studio with a real piano, and put it out as a duo – that’s the way we’ve often composed our songs, and we felt it was important to share it with the world in this format.

We found Island City Studios in Bombay (a great place to record music), and put down our tracks in two days. The album was then mixed and mastered by Sebastian Ohmert in Berlin into the format you hear now, and to be released on Subcontinental Records.

YSW: Where did your love for jazz begin?

RT: I guess it came from listening to my mom playing Peggy Lee when I was a kid. And then it was all around me. But when I was in my late teens, my passion for jazz became a serious thing. I devoted many hours listening and mimicking and singing these songs.

YSW: Can you tell us about your experiences in the US?

RT: Actually, I went to the US because of an organisation called Jazz India, that sponsored my performances in some festivals in Europe and then I went to NYC to learn more jazz. I turned 21 en route, in Paris. Jazz India was a lovely philanthropic organisation which wanted to promote jazz. It was led by Niranjan Jhaveri who heard me sing and he decided he would try and help me realise my dreams. It was quite magical. I can’t ever forget him or how lucky I was.

YSW: You are a trained Hindustani classical singer also. Why did you choose jazz?

RT: I learned Hindustani classical in order to use it for the singing of jazz. I wanted to bring Indian influences to my music, just like Latin musicians and African musicians bring their influences on jazz. My first love is jazz. And all I am trying to do it bring something of myself into it.

YSW: Can you tell us about your literary career? Are you working on a new novel?

RT: I’ve had three of my books published so far. Men on My Mind, More Men on My Mind and The Cauliflower Diet. I know, odd choice of topics… but not if you really think about it. I love men. I love food. And I also love dogs. So, a book I have just completed is called ‘Dog Tails.’ My agent Jayapriya is trying to find a dog-friendly publisher for it.

YSW: You have met so many famous jazz musicians - who are your heroes and why?

RT: It’s hard to answer this question. There are so many amazing musicians like Chet Baker (in whose memory I released another album just this month called ‘Vocalese: A tribute to Chet Baker’) have influenced how I sound. But my most favorite musician in the whole world is Aman Mahajan. He is a phenomenal, sensitive, intuitive and constantly evolving piano player. I couldn’t have continued my musical journey in these past ten years without him.

What are some of the Hindustani and Carnatic musical influences in your work?

In your opinion how has jazz evolved over time?

RT: Without being forced or coerced, jazz has become more and more inclusive. It’s the only way the music can survive. It’s very much like human beings evolve. You have to keep expanding the gene pool and introducing new blood (ideas). Music cannot stagnate and cannot cannibalise itself.

Can you give us some highlights of your music career and your band?

AM: The highlight of our work so far was definitely when we had the opportunity to play at Europafest in Romania a few years ago. This album will be one of the next milestones for us, and hopefully lead us to many more.

RT: It’s been rewarding to both work on and create music all my life. In the past 10 years specially have been special because I feel something has been set free in my soul. And I think Aman has a lot to do with it.

YSW: What are some of your tips for budding musicians?

RT: Hmmm. I’d say listen to a lot of music and practise a lot.

YSW: What do you enjoy doing when you are not working?

RT: When I’m not writing books or singing songs, I’m watching TV or playing with my dogs or trying up my game at the gym. I also try and get involved in civic issues in my neighbourhood.

YSW: What are your plans for the future - both in your music and literary career?

RT: More music, more songs, more dogs and less food. Oh, I’m constantly writing poems. I would love to be able to go freestyle with my poems. That’s my next ambition.