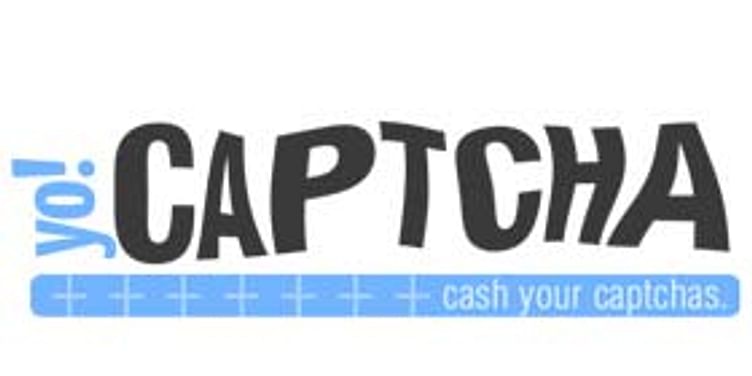 Here's a little trivia: Everyday over 280 million CAPTCHAs waste more than 800,000 hours of human attention. On the other hand digital marketers are now understanding that online-advertising through conventional spaces like banner-ads etc is kind of broken. There’s a fight for human attention which is also not being captured in an effective way by banners.This when three BITS Pilani engineers, sitting in their dorm room, asked themselves- when there’s an unused space on the internet wasting so much of user attention daily and there’s a whole industry struggling to capture it, why not blend them together and come up with a powerful tool? And so, yo!CAPTCHA was born.

Innovese Technologies started out as a college (BITS-Pilani) outfit that provided web/design services and consultancy. Since October 2010, they have been dedicated towards working on their new product named yo!CAPTCHA- An innovative form of online advertising where they deliver ads through CAPTCHAs. This is a very interesting and powerful platform that replaces the regular warped-text based CAPTCHAs with crisp and clear advertisements. Instead of asking a user to recognize and type a random string, they are asked a simple question based on the ad. This solves the problem of the whole irritating user experience of solving a CAPTCHA, makes publisher earn revenues out of them and advertisers get a brand recall and cognitive advertising, with an impact like never before!

A team of three engineers from BITS-Pilani- Ankit Gupta, Neeraj Agarwal and Dhruv Sogani, lead the operations, programming and marketing respectively. They founded Innovese back in the November of 2009 and wrote software and web-apps for clients both in India and Abroad. Through the course, they rolled out a few products like Slambook (facebook application), foreigninternship.com and so on. With this, they not only earned for themselves a strong product development experience and exposure, but also the revenues generated from their work were pumped in to support Innovese.

In 2011, they got through as one of the iAccelerator companies (a CIIE-IIM Ahmedabad initiative), and received a seed fund of Rs. 5Lacs.

With the launch of a beta version of their product in February 2011, they now aim to move towards a holistic ad platform. They are working on making yo!CAPTCHA a robust platform for all- users, publishers and advertisers. They’re also working on features that take keyboard away from CAPTCHAs, where users won’t have to type anything to prove they’re humans and make CAPTCHA totally painless to solve. They are also working on moving into banner advertising with social features, to make banner ads more than just static images and instead, an engaging and desirable experience.

Simply put, advertisers pay Innovese for their ad-campaigns and they share it with their publishers, thereby monetizing. yo!CAPTCHA has three models for pricing to advertisers, ie., (1) Advertiser paying on every correct CAPTCHA solved by the user/ Or Pay Per Confirmed Impression or (2) Licensing Model, where publishers can advertise their own ad messages on their portal, thereby doing away with regular CAPTCHAs and (3) yo!CAPTCHA ads being clickable have regular PPC model runnning on the top of it.yo!CAPTCHA is fully automated for both publishers and advertisers. It is absolutely free for publishers who can now generate revenues through Captchas.

So that a website does not look ugly or disorientated with random colors, they have made every part of yo!CAPTCHA customizable with colors matching the website’s theme. They also have ready plugins for Wordpress, Joomla & Drupal publishers, which can be easily installed.

Solve Media, a US based company is a similar market player and has been around from more than a year. Rolled out around same time, but being on-campus students, Innovese faced the ‘student-constraints’, and couldn’t lift the sales up at that time.

“But we really learnt a lot during that period about the product through feedbacks and live data collection, so we started writing all the new features and powerful algorithms into it. Meanwhile, we have seen CAPTCHA-Advertising being talked about on internet platforms a lot and similar products like Yinxiangma, NLP Captcha, Adaptcha etc. coming in at later stages” says Ankit.

Having an immersive experience of product development in design since its inception, Innovese maintains to never compromise with the product. They claim to have worked hard and researched a lot over their security algorithms, while immense learning through their first beta and lot of market behaviour has been put into the product.

“We have various other features and we have totally automated every step of coming on board to make it very easy for advertisers to upload ads and publishers to install it. yo!CAPTCHA also provides intelligent targeting and detailed reportings. We think that the product itself speaks of our differentiation!” Ankit, on behalf of Innovese, concludes.