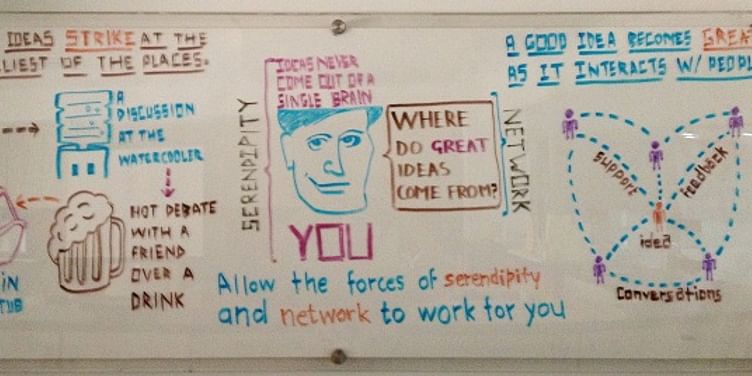 Remember the good ol' days when you could find a lot of entrepreneurs or wannabes who were working on their next big idea out of their garage? That was so cool. Except it wasn't really.

Mark Zuckerberg, one of the more introvert kids during his college days, could launch something like Facebook that was so amazingly social only because he was surrounded by his own customers i.e. his college peers. Remember this scene from ‘The Social Network?’ -- one when his Princeton peers ask Mark the Single/Available status of a girl in his class. Camera zooms in... Mark has a feature epiphany -- people want to know the dating status of other people -- and then he runs to his dorm-room and integrates that feature into Facebook. Now that wouldn't have been possible if Mark had just decided to visualize his entire product at one go and then sat alone in his dorm-room coding; would it?

To think of a good business idea and to actually execute on it, you need your time to be divided healthily between working alone productively and working/interacting/collaborating-with/or-just-surrounded-by other smart people. This, according to me, is the biggest benefit a good co-working space offers. It is fun and interactive like a cafe, at the same time productive like an office. So if you are an entrepreneur or wannabe entrepreneur working alone on your big idea, think about these five reasons to go visit your nearest co-working space.

1. You will find your next start-up idea here

Start-up ideas are epiphanies (See this article by Paul Graham). And epiphanies mostly occur during conversations or debates or when you actually enquire what people need. Co-working spaces are ideal for all three things. During a SME meetup at The Playce, one of our coworkers realized that there's no value-for-money way for SMEs to build their brand. Now he's creating design solutions targeted specifically at value-conscious SMEs. Two other co-workers -- an automobile enthusiast and a TV producer, realized that they are passionate about the same stuff and now are working on a reality show concept around cars. As Graham says in his article, magic happens at the intersection of two seemingly unrelated spheres (like what we do via DeliverWithMe). And you will hardly find people from such varied backgrounds at one place anywhere else than a co-working space.

2. You will be more productive

No spouses, moms, kids, dogs or all of those hovering around your workspace. No rushing to a coffee-shop to meet a client as you can invite him to the co-working space itself.

3. You will be surrounded by potential customers

One of our co-working start-ups called Kuchnaya has launched a platform for creating and sharing educational content. They've found three takers from the coworkers itself who are ready to pay Kuchnaya to use it. A design student got a contract to design logo from one co-worker and to design website from another. The beauty also lies in the situation that both can actually see him working live and check on how their work is progressing.

4. You will build relationships

Networking is not enough. It's never enough to build relationships. Meeting people in random startup events doesn't get you your next potential client or collaborator or co-founder. You can find him by sitting and working next to him, eating your lunch with him, having an animated debate over a coffee with him. You get my point?

5. You will have fun

When I visited Bombay Connect, a co-working space for social entrepreneurs, for the first time, I saw some people wearing headphones and working head-down on their laptops while some were white-boarding stuff. Some were actually reading books in their cozy library. But there was no one with I-am-so-bored-what-to-do-next look. Plus there are lots of interesting meetups, workshops, conversations that is always going on. If not, you can always start one.

So are you game?

Shekhar Gaurav is the co-founder of The Playce, a co- campus for start-ups in Mumbai. You can reach him on twitter @ShekharGurav.