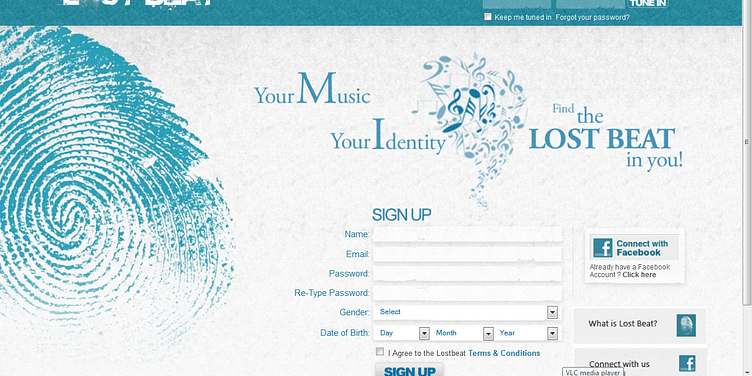 In this age of social networks and internet dominance, everyone has an idea to use the net to do something new. So on one hand you have Facebook and LinkedIn, which showed how virtual networks can be built and then you have startups like Lost Beat who are taking the same idea to a new level. Lost Beat is a social network for musicians and those interested in music. Started by twins Abhay and Akshay Purthi alongwith their friend Ashish Goel, Lost Beat wants to be a platform that can help unknown artists from India and eventually from across the world to converge and build connections through their music tastes.

Once you signup with Lost Beat, you can enlist the kind of music you like, upload favourite songs, listen to recommended songs on the Lost Beat Top Rated playlist, listen to popular songs on the Top Songs playlist, interact with other members on the site and discuss everything about music and more. Lost Beat has a look and feel similar to Facebook and users will find the interface familiar to use.

Abhay and Akshay started Lost Beat when their finance partner Ashish, told them to startup instead of presenting their idea at college B-plan competitions. Besides allowing people who have interest in music to meet each other, Abhay says they also have plans to launch what they call Project Matrix – an avenue which will allow musicians to come together to either form offline bands or where these musicians can join hands and collaborate for a gig. “Today if I have to form a band, I have to put a manual message on Facebook to find a guitarist or a drummer and such. But with Lost Beat I can simply look at a person’s profile, understand which genre he likes, what his tastes are and join hands,” explains Abhay.

They also have an offline module where they want to take musicians who register on Lost Beat to the offline world and help them conduct shows in cafes or colleges. The team has already conducted an event called ‘Dhwani’ which according to Abhay had participation from many unknown musicians who could showcase their music through Dhwani. Next in line is Lost Beat.me, which will tell stories of musicians across the country: “It will be something like YourStory, but we will only do stories of musicians,” says Abhay.

Besides these three, the Lost Beat team has a team of 10 technical people who take care of the online platform and another team of interns who are currently doing the story-writing part for Lost Beat.Me. Presently the startup is bootstrapped and Abhay says they will only start looking for funds once he finishes his college, which will take another year-and-half’s time. It is also around that time that they will focus on the monetization part for Lost Beat. Currently they are happy to provide a platform for musicians to network, share their music with each other, get together offline to form partnerships and help make a difference in the Indian music scene. In the future, Lost Beat also wants to help musicians make their own album and sell them through Lost Beat. The revenues made from album sales will be shared between the musician and Lost Beat.

The team started thinking of the idea for Lost Beat in 2011, but the actual site went live only in early February this year. Abhay and Ashish are both musicians and have dabbled in music through most of the lives. Abhay is a vocalist and Ashish is a drummer and Lost Beat also came out of their need to make their music heard by a larger audience. The next step according to Abhay is: “We would try to work extensively on out marketing aspect from this month and would like to associate with people who can mutually benefit from our model. Primarily Lost Beat.me model would be our focus in addition to promotion of www.lostbeatlive.com”