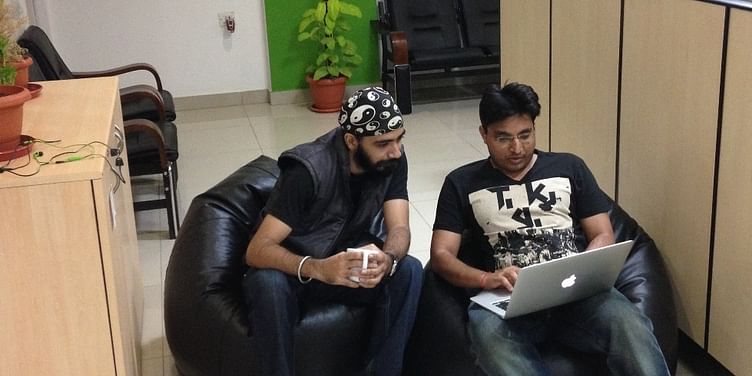 This article is a part of the Culture Series we are carrying as a run up to the Startup Jobs Fair, India’s first exclusive campaign to connect the most promising talent with the most exciting startups. This series will bring out the culture of some of the most dynamic startups that have managed to scale and make a mark. Today we are showcasing Plivo.

Drunken stupors have mostly had disastrous effects. The English movie Hangover, has shown us what great damages these stupors can cause. But Venky B and Mike Ricordeau would strongly disagree with this point. Because their super successful venture Plivo, came up because the duo decided to start their own venture while having a couple of beers.

Plivo is a telecom service provider based on cloud platform, which helps you do everything the normal EPABX systems can do. So if you own a call centre and want a solution to receive, handle and distribute all calls, then Plivo is the one for you. Setting up IVR, call forwarding, routing, etc are all different use cases where Plivo comes handy. It is also popular among individual developers who want to have a personal phone number to be put on their blogs.

Plivo, which means…err…nothing in particular, has a 17 member team based in Bangalore and the US who handle the development and business side of the startup. “Mike and I were running a different business in telecom, and trying out Plivo as an experiment. We had a fetish for five-letter words, hence had few domains including "Plivo". Turns out we shut down our initial venture and Plivo became the real business,” explains Venky about the origins of the name. The young team at Plivo work 24x7 to ensure there is customer delight and customer satisfaction when they use their product or service.

But these long work hours are by no means a compulsion. Venky says the culture at Plivo is a very flexible one and very unlike a corporate. And one of the reasons for this is because Venky and Mike themselves were never great enthusiasts for swiping in/out or following the strict work hours that corporates have. “I dont think it is necessary to have a strict timing for work, because if I can finish what I want to do in four hours, what’s the point of sitting around longer?” reasons Venky. Venky was earlier working for Huawei, while Mike was an employee of France Telecom. The 7-8 years of corporate experience has helped the Plivo founders decide what they should and should not include in their company from that part of the world.

One thing they strongly follow is the culture of meritocracy – to reward everyone for what they have done right is a way of life at Plivo. Therefore it is not odd if you hear of three-monthly or six-monthly appraisals at the startup. Being funded by Morpheus and backed by Y Combinator made sure that Plivo started its journey with a boost. While Venky refuses to share the actual numbers, he says they have grown by leaps and bounds since their launch in December 2011. Today their bouquet of customers comprise 80% individual customers and 20% corporate clients.

People joining the startup must be self-driven and motivated says Venky. “We want everyone to be mini entrepreneurs in the team,” he says. Plivo follows a flat hierarchy and tries to get as many enterprising people onboard as possible. There is a strict screening process for developers which includes telephonic interviews and programming assignment which the candidate has to complete and come back to show them. After the initial screening process, they are encouraged to work with the startup for atleast 3-4 days to see if they like the work environment and the work that Plivo does. While they don’t mind having people with proper qualifications, a degree is never a hindrance if the person knows his stuff well. “We’ve not focused only on educational qualification; we don’t care about all those things. But we just want people who can deliver and get things done,” says Venky.

Despite all the checks before a person is hired, if there is a mismatch of the candidate when he finally comes on board, then such a person normally dosent stay very long with Plivo. “The person’s attitude and if he can work with us can be checked in 3-4 days. But still if any team member has a doubt then we can evaluate that person and this helps reduces the number of wrong hires in the team,” says Venky. It’s going to be high pressure stuff, not all fun and therefore the need to have entrepreneur like attributes. “People who want a corporate type of job, want the whole hierarchy thing and like micromanagement, would automatically drop out,” says Venky. While there have been wrong hires in the past, they were just a small number.

Besides the normal work, employees of Plivo also get the chance to represent the company in outside forums. At the Python conference held in the US sometime back, two-three developers represented Plivo at the event. Apart from conferences, developers are also encouraged to share their knowledge whereever they can. And Plivo developers have trained participants of PyLadies and Ruby Ladies group on the respective software languages.

So for people who work so hard, Plivo ensures they are all well fed. Lunches, dinners and unlimited snacks is on the house and no one is ever hungry at the startup. When we asked Venky what is the difference he sees between the culture in the Valley and in India, he says the Indian culture still looks down upon startups, where as in the Valley people are more supportive of the phenomenon. “Biggest thing in Indian culture is the support system, people still look down upon working in a startup. Quitting a good corporate and joining a startup is still not encouraged. Here salary, buying homes, cars is the goal, but in US the goals are more longterm.

Plivo is looking for Python and web developers. So if you like to work in a fast paced startup that encourages you to be an entrepreneur yourself, do drop in at the Startup Jobs Fair to meet Plivo.