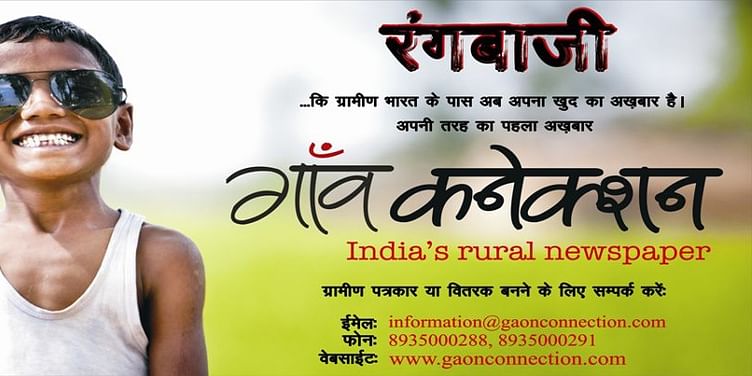 Gaon Connection is an effort to give voice to rural India. “In an era where India’s media industry concentrates on the urban concerns, Gaon Connection strives to give rural citizens a voice of their own.” says Neelesh Misra, co-founder of Gaon Connection.A journalist by profession, Neelesh started his rural venture leaving his plush job at a leading daily, with an intention of giving back to the society. Started in December 2012 along with Karan Dalal, an IT Professional, Gaon Connection was inaugurated by Akhilesh Yadav, the chief minister of Uttar Pradesh. His parents returned from Canada to set up a school in rural UP and dedicated four decades of their life to the service of rural citizens. Neelesh wanted to continue his parents’ legacy and led to the setting up of Gaon Connection.

Apart from being a journalist, Neelesh has also penned down five books and few songs for Bollywood movies. He thinks newspaper is an eye-catching attempt to restructure journalism on rural India by writing stories which is mostly about problems affecting ordinary people like unemployment and scarcity of agricultural inputs. This is interspersed with success stories, best practices in farming and other rural businesses innovation tales. Neelesh however believes there is much more to rural India and through Gaon Connection he wants to change the stereotypical image of rural areas. He also wants to provide rural market intelligence to urban businesses that will help them understand the changing trends and needs of rural India.

Gaon Connection has a team of 15 that comprise youth from both rural and urban India. The venture goads educated youth in villages towards citizen journalism, instead of flocking to the cities. Advertising agency Ogilvy is accessing the potential of the venture for affiliation.

Gaon connection is a bootstrapped venture and has convinced journalists from news channels like IBN7 and NDTV to contribute to the newspaper. Gaon Connection relies on advertising for its revenues. The daily will cover developments in 75 districts of UP and plans to document happenings in Bihar, Jharkhand and Madhya Pradesh. Besides the rural populace, Neelesh plans to tap rural immigrant in cities like Delhi and Mumbai. “This will help them stay connected to their roots and might help in bringing the talent back to village when they spot opportunities.” explains Neelesh.

Neelesh also has plans to translate the newspaper in English. Also on cards is a audio newspaper, which will be a big step for Gaon Connection to proliferate and widen its reach. It will be a subscription based model available on mobile phones that will mostly present headlines from rural India. An edition in English every week will help people from across the world tune into news from rural India, says Neelesh of his ambition for the venture.