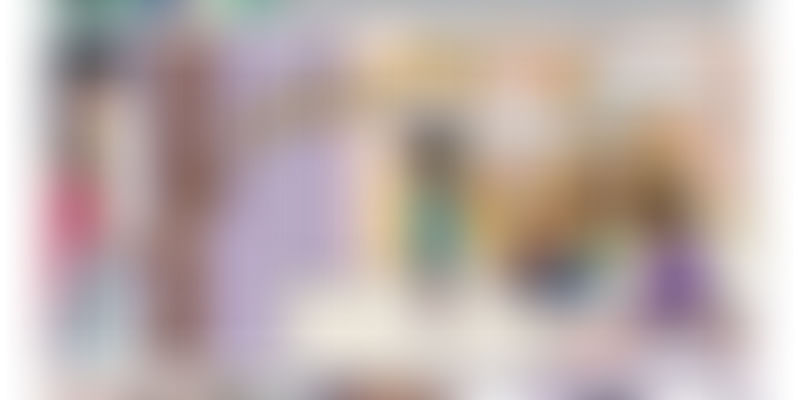 That’s what the team of Menstrupedia thought, to find an effective way to talk to young girls and boys about menstruation.Menstruation has been associated with embarrassment and shame in India. Remember those ads when menstrual periods were referred as “those days (un dino mein)”? We have come a long way from then, but this is still a topic that is not discussed openly at home or school.

As this is a topic that is not very widely talked about, many girls and women do not have access to basic information that can help them. NID graduate Aditi Gupta cofounded Menstrupedia with the intention of presenting the information about menstruation in a way that is not only easy to understand but also sensitive towards the taboo nature of the subject.

Aditi had herself experienced and dealt with menstruation related problems in her life and had always felt a need for trustworthy and easily accessible information on this subject. Hence she took up a research project in this domain as a research associate for Ford Foundation at NID. During her research Aditi, along with the cofounder of Menstrupedia, Tuhin Paul interacted with many school girls, NGOs and parents on this subject. It was found that the best time to educate a girl about menstruation is when she is most likely to experience menarche (the first menstruation) whereas the books in the Indian educational system introduced the topic of menstruation in an insufficient manner and often at a very late stage, much after the onset of menstruation in the girl students. At the end of the project Aditi and Tuhin had created a prototype, which was a printed comic in Hindi. An online version of the prototype exists here at http://www.talesofchange.in. The prototype was tested among the schoolgirls. The response from the users was positive but due to lack of funds they had to shelve the project. One thing was very clear that a website is needed to target a much larger set of users so that their reactions can be used to improve the content and make it more relevant for other cultures as well.

After NID, Aditi and Tuhin worked in the in the media and communication industry for 2.5 years. They quit their jobs and started Menstrupedia in August 2012 to put their ideas and objectives into action.

Around June 2012, Rajat Mittal who had just returned after his Master’s and a 2.5 year work stint in US decided to join the project to take the initiative forward and help carve the product out from a technological standpoint.

“As a starting point we envisioned a website that would serve as an easy to follow, medically correct guide on menstruation along with beautiful supportive illustrations. Thus Menstrupedia was created and launched on 29th Oct 2012,” shares Aditi.

“As a designer I have always been very passionate about visual communication and storytelling through illustration, animation, graphic design or comic. I have been involved in this project since its conception and knowing that my artistic skills can help in bringing a positive change in this world is hugely satisfying and motivating. Menstrupedia as a project provides me with an excellent chance to use storytelling and visual communication to create a positive impact in the lives of girls and women around the world” adds Tuhin on his motivation behind Menstrupedia.

Menstrupedia aims at spreading awareness about menstruation and shatter myths around the subject. At menstrupedia we are devising various ways to help young girls and women stay informed about their body and managing their periods effectively.

At the young stage, Menstrupedia wants to help young girls learn about periods in the most engaging and non-threatening manner using effective storytelling and illustrative guides.

For teenage girls and older women, Menstrupedia aims to correct myths circling around the issue, provide up to date, effective remedies and use technology to create tools that can help a woman track her periods effectively.

This is an illustrated reference guide that provides essential information related to menstruation in a concise and easy to understand manner. This would eventually cover the following topics: Puberty and Menstruation, Physiology of menstruation, Hygiene and Management, Nutrition, Menstrual pain management, Menstrual myths, Pregnancy, For parents and educators, about menstruation for males, HIV and AIDS. Out of these only the first three topics have been covered till now. Once completed and validated, this guide would be translated into different languages. All section of the guide would be available as free downloadable pdfs that one can download and share with others.

“We receive many testimonials from our site visitors saying that they found the website very easy to use and informative and have even recommended it to their younger sisters, daughters and friends,”shares Aditi.

This is a place where people can ask questions related to menstruation or any other related topic. The answers are from the community members themselves just like in a regular forum. But unlike a forum the focus is more on finding an answer to a posed question, rather than engaging into a discussion. As the time passes by, the number of well answered questions in the Q&A section would increase and cater to ever increasing number of users. “We encourage users to site proper sources for their answers unless they are themselves professional medical practitioner. Though moderation is actively done, Menstrupedia does not hold responsibility for any content in this section or any situation that might result from it. We have collaborated with Dr Bhide has an experience of more than 20 years of experience as Obstetrician&Gynecologist. He is the medical expert who answers questions in the Q and A section,” adds Aditi.

Menstrupedia blog is a completely collaborative space where people from all walks of life write share their stories and experience on menstruation and issues related to it. These articles are shared widely in the online space and have opened up many discussions and conversations around the subject of menstruation.

Response on the Prototype:

Aditi: “The response to the prototype has been overwhelmingly positive. Not only did the young girls whom we gave samples of the comic enjoy it, educators and parents found it very helpful too. Parents felt that using comic to educate about menstruation is very effective in eliminating the feeling of shame associated with this topic and creating a favourable environment for them to discuss this topic with their daughters.

In one instance during our prototype testing amongst a group of students consisting of both girls and boys, the boys felt a little uncomfortable in discussing this topic and were reluctant to know about menstruation. However after the prototype was shown for the girls to read in a group, it the piqued interest of the boys as well. This was a great validation for us that the comic book style of the educational material is very encouraging in terms of its readability.

This prototype that we had developed is now free for people to print and use. We have also given away free copies of this prototype to NGOs working in the field of women health”

“The comic is meant for young girls (9-11 years old). It introduces the concept of menstruation and menstrual hygiene management through interesting characters and scenarios that they can relate to. The comic will be available as a printed book as well as an audio visual narrative on digital devices. Initially we are catering only to Indian audience but subsequently we would modify the content to suit different cultures across the globe. Parents can purchase this comic and gift it to their daughters. We will also collaborate with schools to make this comic available to girl students,” adds the Menstrupedia team.

After having completed the comic that they are developing, the team wants to convert it into printed comic book as well as into audio visual comic available for desktop and tablet devices and translate it into various languages so as to reach out to as many people as possible. Along with that, they want to make the quick guide section of Menstrupedia more extensive while keeping it easy to navigate.

How you can help

Menstrupedia has been a completely self funded project so far and Aditi and Tuhin have been working full time on this since last 10 months. To raise funds for the development of the comic, they are currently running a crowd funding campaign to raise funds here: http://www.wishberry.in/Menstrupedia-comic-Change-with-a-Smile-16094