First rural family to beat cities in self sustainability! 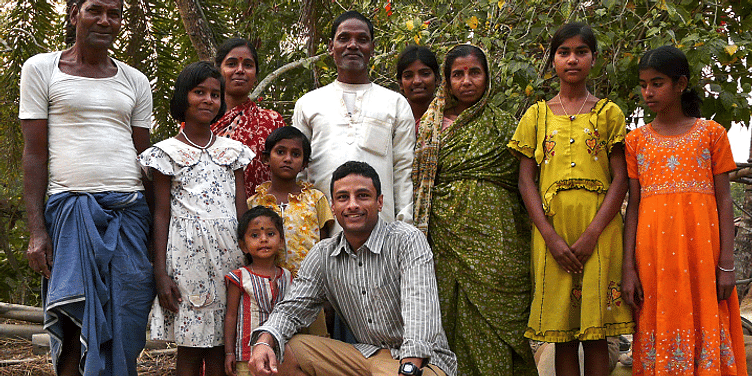 India is a country of villages, with endless number of challenges right from poverty, electricity, education & so on. And there are many organizations working hard to really make a large scale impact for our country with some of the very innovative approach, but here’s a man, who believes that sustainability builds from a single family as a single unit. He believes that if one family in a village can live sustainably, without having to depend on others for resources, it can have a huge impact in the eco-system around it.

We got in touch with Kalyan of ProtoVillage, where he’s been instrumental in creating a prototype of an Abundant family.

Kalyan comes from a middle class family, where he was home schooled till class 12. He says “I would just get completely lost in a subject that when the bell rang after that period, I just couldn't focus on another subject, as I would have started loving that subject”. Later he went on to pursue his education, completed Mechanical Engineering & followed by MBA. He says “Engineering was the first time I was sitting in class & that gave me a strange feeling, and my other classmates were so focused on scoring marks, that really didn't interest me”.

Later he started working for a few companies & realized that it wasn't really his calling. He desired to do other things & his job was the hindrance. He says “I didn't really believed in the concept of making rich companies richer”.

So he decided to quit & started to travel around the country in search of his passion. He says “I had a lot of fun for 2.5 years, it was one of the most enriching experience I had come across & the best part of all my journey was meeting different people from various walks of life. We all talk about people living below poverty line, but we don’t really know what that means. I met a lot of people below BPL & lived with them, but one thing I realized was that there was no shortage of generosity among them”.

So how was ProtoVillage born?

We wanted to build a place where everyone wants to live & eradicate poverty. There was no reinvention, but the idea was to identify the existing methods, implement it in one village & make it sustainable & also to keep it all open source, easily accessible for everyone. But as we started working, the focus slowly changed from one village to one family & we started thinking of scaling down rather than scale up. The focus was only on one family & make it autonomous to fulfill all the basic needs.

There was one family who wanted to move from that village as there was lack of opportunities for them, so we approached them to give them a year’s time to experiment this model of sustainability, where the concept was not complete yet. They figured their annual income of the family was Rs. 7000 & they had an uncultivable land. I started living with them & we worked for 7 months without any machines to make the land flat & cultivable. We even built a house & started growing most of the things including vegetables, maize etc., As we had lots of fodder, we figured we could have a cow & when we bought a cow, we started selling milk, thus started direct income as well for the family. We then installed a bio-gas plant & then a wind turbine to produce energy, thus slowly it completed the circle of sustainability.

How scalable is this model?

This model is infinitely scalable, the only constraint is our will. If we have the right will, it can be replicated everywhere. We wanted to purify water, so in collaboration with IISc, we were able to setup water defloridation plant for this one family. After seeing the success, it was replicated by more than 200 panchayats. Like-wise, after our installation of Bio gas setup, more than 500 families have adopted this method. All this were the efforts of volunteers & other families and I did not participate in any of the replication process.

This exemplified me the power of good example. Setup a beautiful example & let it take rings.

What is your message for budding entrepreneurs?

Don’t get too burdened by your aspirations, have a vision that makes you come alive every single day. Just keep your head low & mind your next step, with that vision in your mind.

You can reach Kalyan on mail or get more info about ProtoVillage here.