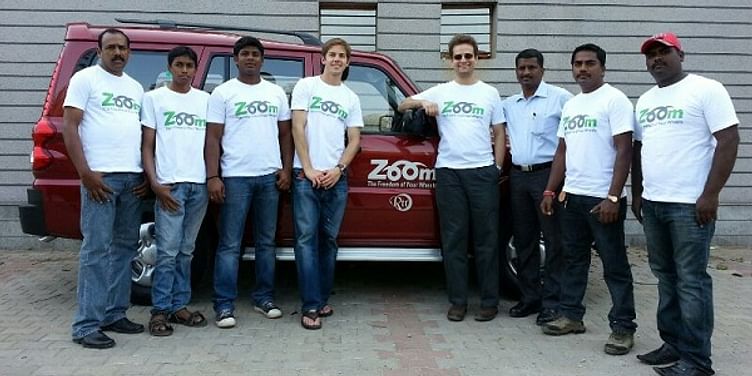 Almost nine months ago, an enthusiastic young man, Greg Moran had dropped by in our office in Bangalore with his idea of Zoomcar - self drive cars in India. Over the months, the idea has been implemented, raised funds to scale and has gathered some solid traction to show.

We earlier wrote about Zoomcar in April since when the company has manged to raise a total of $1.6 million over two rounds. The latest round of $1 million was led by New York based angel investor group Empire Angels. Other investors who participated in the round include San Francisco-based venture capital firm Funders Club, Basset Investment Group, former US SEC commissioner Lady Barbara Judge and some other angels in India. “We pitched to many investors here but realized that the VCs didn't seem to be convinced. We now have good traction and probably this will generate more interest,” says Greg.

Zoomcar has been founded by Greg Moran and David Back and the idea is to allow customers to rent cars (hatchbacks to sedans) on an hourly basis. The pricing for various cars hovers from INR 200-1000 per hour and it includes insurance along with the fuel costs. Starting from a fleet of 7 cars, the number has grown to 52 now and the intention is to triple that in the coming months.

“We've had to drive away customers on weekends,” says Greg. Launching with an event in Malleshwaram, Bangalore, Zoomcar has been marketing online as well as offline. The team size has grown to 41 where around 30 people take care of on-ground operations and customer support. Zoomcar has also expanded to six locations in Bangalore and the intention is to firmly establish in Bangalore before moving to other cities.

The car rental space has become a crowded one in India with investors putting in a lot of money in various companies in quick succession. Funding activity in the sector pretty much dried up after the spree and now is probably the time when the companies will be evaluated. Specifically for Zoomcar, the model is a capital-intensive one but the initial traction would have encouraged the founders to go for the kill.

Check them out here: Zoomcar