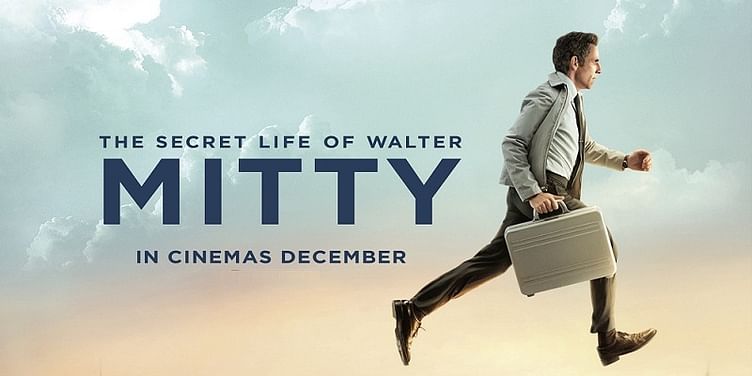 Was more painful than the risk it took to blossom”

This quote reminded me of a quirky little movie I saw a few days ago. Based on James Thurber’s classic short story by the same name, ‘The secret life of Walter Mitty’is a beautifully shot movie. Ben Stiller plays the lead and also directs this one.

Walter Mitty is over 40, an anonymous man, living an anonymous life. He lives in a building with no character, his attire is indistinct and his life is one big routine. He constantly escapes the anonymity of his life by day-dreaming a wildly adventurous life as a swashbuckler.He is a photo negative assets manager at the ‘Life’ magazine, where he has worked for 16 years. One fine day, ‘Life’ magazine is acquired by another media house and they decide to shut the print version and go online, in the process cutting hundreds of redundant jobs, including Walter Mitty’s. The final print issue has to go out and it is decided that world famous photojournalist Sean O’Connell’s picture #25 in the last film roll he sent has to be on the cover of the final issue. Sean’s letter to the editor highlights that #25 is the “quintessence” of ‘Life’. The catch is this – there is no picture #25 in the roll. To make matters worse, Sean is a recluse and a nomad to boot. Over the years, Sean and Walter Mitty have developed a bond over snail mail and Sean refuses to correspond with anyone at ‘Life’ other than Walter. So now, Walter jumps headfirst into an adventure spanning Greenland, Iceland, Afghanistan and the Himalayas in a bid to trace Sean and find the missing negative in time for the final issue.

There are a few things that we can learn from this movie:

Like in any beautifully told story, it is revealed during the course of the movie that Walter Mitty is, in fact, an adventurer at heart. His dad was a big influence in his life and he was so cool that he had personally shaved his son’s head to fulfil his wish of having a Mohawk hairdo! But when Walter was 17, his dad had passed away, forcing Walter to take up a job at a pizzeria and contribute to the family’s income. The next 23 years became a series of jobs and responsibilities.

Can you remember when you were a kid and the possibilities seemed endless? When practically anything in the world could be achieved? Life has a way of knocking you about until you tell yourself that there are some things you can’t do anymore. Well, that’s utter nonsense.Its never too late get up and start working on whatever dreams you want to build now.

2.Be passionate about something

Walter was forced to embark on this adventure because of one thing. He is passionate about his work as a negatives manager and proud of the fact that in the 16 years he has worked there, he has never lost a single negative. So when picture #25 goes missing, it’s unimaginable for him. Consider the scenario. He’s been laid off. He hasn’t saved much money. He doesn’t know what his future holds. Yet it is important enough for him to go find that negative by traveling all over the world at his own expense and deliver on his final commitment.

Being an entrepreneur is much the same. If you are not passionate about something, it is practically impossible to wake up every morning and put yourself out there. It has to drive you relentlessly enough for you to be able to make it to the end successfully.

3. You never know who may end up being your friend

One of the quirkiest parts of the movie is Walter’s relationship with a dating site’s relationship manager. For most of the film, we only hear this character, Todd’s voice. Despite Todd’s frequent calls to Walter to provide tips on how to improve his profile, Walter is unfailingly courteous and polite with him. Todd and Walter connect over the next few phone calls while Walter jumps into shark infested waters, skateboards to an erupting volcano and hikes in the Himalayas.So when Walter lands in the US and needs help confirming his identity, he reaches out to Todd.

There are many people we come across in our life’s journey. There is just one way to treat them – with humility and respect. Not because they mayhelp us in the future. But because that is the way every human being should be treated.

Each of us has an adventure inside us. It is waiting to be let out, to be lived, to be experienced to its fullest. Go on, open the doors!

“It’s a terrible thing, I think, in life to wait until you’re ready. I have this feeling now that actually no one is ever ready to do anything. There is almost no such thing as ready. There is only now. And you may as well do it now. Generally speaking, now is as good a time as any.”