The report of my death was an exaggeration, Freshdesk tells Forbes & Microsoft 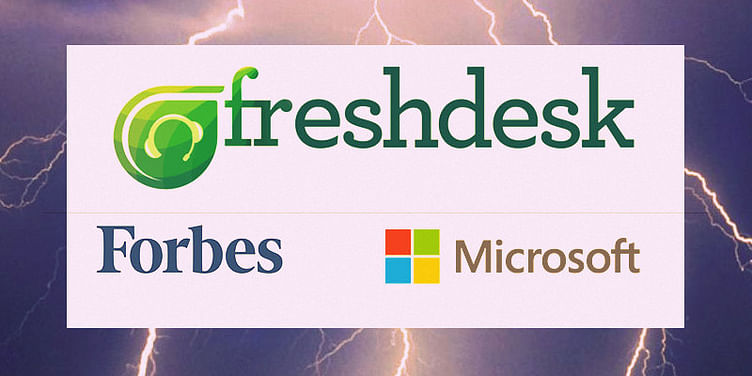 Cash-rich companies like Microsoft have an easy way to get new ideas and talent: acquire smaller, more innovative companies. But when a big company acquires a startup, what happens to other startups in the space? According to an article in Forbes, that's the end of competition in that domain, and the other small players might as well shut shop.

The article is written by Gene Marks, whose company partners with Microsoft to sell Dynamics CRM: An obvious conflict of interest that is declared by the writer. But the article then unabashedly goes on to present a one-sided picture in favour of Microsoft, making it seem as if the game is over for competitors of Dynamics CRM after Microsoft's acquisition of customer response SaaS provider Parature. The reader is left thinking that Microsoft, merely by the act of acquisition, has already set the standard in this domain, and the other startups have gone kaput in their business.

Such a tall claim made in an international US-based business publication may have normally gone unchallenged, and misled readers around the world, not to mention clients of all the companies concerned. But one of the startups supposedly put out of business by the acquisition decided to take it head on. Its founder and CEO Girish Mathrubootham put out a blogpost pointing out the unsubstantiated claims made in the Forbes article, and making it clear that the game was far from being up.

YourStory has a detailed, exclusive interview with Girish Mathrubootham elaborating on the claims and counters. But first the back story on what happens to the Davids in a particular domain when a Goliath swallows one of them.

The domain in question here is help desk/customer service management applications. The innovators in this space are Freshdesk, Zendesk and Autotask. Microsoft's Dynamics CRM also has a ticketing feature – the tool that helps track customer issues -- to respond to customer feedback in real time, but lacked a good knowledge base -- FAQs and other basic blocks that tackle first-line customer queries. Now with the acquisition of Parature, Microsoft hopes to create a one-shoe-fits-all product.

I began by asking Girish if this meant that customers would no longer need the solutions and further innovations from his company to handle customer support issues. Far from likely, he told us, in this interview:

The Forbes article, Microsoft just put these 3 companies out of business, acknowledges that Freshdesk, Zendesk and Autotask had better products in the customer response space. So, what was lacking in Microsoft's Dynamics CRM? Can an integrated solution including the acquired Parature's features close that gap?

The customer support space itself is changing. Traditionally, what was thought to be customer support, including ticketing, knowledge base and service portal, were about responding to customer enquiries. The pitch was that if the customer contacts you with a query, you have to respond to him or her. But today, customer support goes much beyond that into other areas where a customer wants to talk to other customers. And when customers are upset today, they are not even talking to you but talking about you to other customers, friends and those interested on Twitter, Facebook or other social media. What Freshdesk and some of the other startups in this space have is a complete understanding of this changing dynamics. We don’t just provide you an efficient ticketing system and knowledge base to respond to incoming customer enquiries, but also enable customer conversations through community forums where customers can vote on ideas, share ideas, others can pose questions about it, find answers from others, review the product and so on. Those are the components that address the paradigm shift happening in this space. So buying a knowledge base (which is what Microsoft has done by acquiring Parature) is something they should have had already.

Microsoft had acquired Dynamics ERP years ago and the CRM product is marketed as part of the Dynamics family. Dynamics CRM already had the salesforce automation functionality and a ticketing/case system. But it was very weak. According to online reports, Microsoft has acquired Parature to have a better knowledge base system in Dynamics CRM.

But how will MS Dynamics CRM plus Parature’s multiple channels like social, email, and chat impact your customer base? You call it a feature acquisition. But won’t that make MS Dynamics CRM a single window solution, backed by a big company brand? Can innovation and a more focused product from Freshdesk overcome that?

That is a very interesting question. And I want you to think through the buying processor software. Take for instance, you are the customer support manager of a company. A support manager is usually bothered about just a support ticketing system, and not about other aspects like sales. Similarly, sales managers tend to focus on a software that boosts their sales productivity. But the CEO or CIO would want an integrated solution that covers everything. So if one is selling a CRM solution, the pitch is different for a CEO/CIO and a sales/customer support manager. Freshdesk or most of the support systems, even Salesforce when they started out, were not selling to the CEOs or CIOs. The buying process is different.

Another important thing is that this kind of argument(about integrated products being better) used to hold good earlier. See, I come from a background of IT management where an HP or IBM tells a customer: ‘You buy our IT management solution because we have an integrated solution, without buying individual tools to meet individual needs.’ But today, it doesn’t work that way. Why do you think Microsoft, Oracle and others are buying SaaS (software-as-a-service) vendors’ products in the first place? Integrations are being done through Application Programming Interfaces (API). It doesn’t matter anyway as everything comes through the web. For example, Freshdesk has integrated with SalesForce CRM, Jira for bug tracking , and so on. So solutions like ours are already pre-integrated. Now, each component of the customer support system can come from different vendors, yet all these can talk to each other and work together seamlessly.

So this integrated solution notion does not stick.

Will Parature rolled into MS Dynamics CRM offer a cost-advantage?

Parature was launched in 2001. In my previous job, in 2004 I had a product which was competing with Parature and is much bigger in revenues now than Parature ever was. From 2001 to 2011, Parature had an on-premise product, which they were selling to larger enterprises. And they were not really growing fast. You have to take that into consideration. The revenue of Parature is rumored to be somewhere between $15 to 20 million, and they were stuck around 10-12 million for several years till 2011. Also till 2011 they were predominantly selling an on-premise solution. Pit that with companies like Zendesk, which started in 2007, or Freshdesk, which started in 2010. For a company that started years ahead, Parature was not necessarily a high growth startup. They have been looking to be acquired for some time now.

Parature has been involved with MS since 2009 as a third party. How much of a difference will the acquisition now make to MS?

MS Dynamics already had a ticketing system, and so did Parature. But Parature had a knowledge base which MS Dynamics lacked and that is why the acquisition. It is not as if Microsoft has suddenly acquired a hot new startup and got some critical technology. Basically, most of their components overlap. The only new thing they are acquiring is the knowledge base. So if you are talking about an integrated solution, only the knowledge base component of Parature will be adopted into the new product as they obviously wouldn’t push their existing Dynamics customers(with Sales force automation capability) to replace their existing system with parature.

That is why I think that this acquisition is just a feature acquisition.

You ask in your blog: “When was the last time Microsoft put anybody out of business?” What about their acquisition of Skype? Where are the other VOIP providers now?

Skype was a great technology. It wasn’t really competing with anybody else. Skype is clearly winner-take-all. But B2B software is not a winner-take-all scenario, and it has never been. Probably the only exception is SalesForce, which has such a big lead in the CRM market. But if we look at any B2B market, there will be 4-5 good players. Similarly, in our market, we have Zendesk, Freshdesk and a few others. But this is not a winner-take-all market. There are some markets which are so. Operating system and email system are good examples of such markets where you use your muscle. For instance, if you want to take on Gmail with your email product, it is going to be much harder.

You question here is if this acquisition gives MS a strategic advantage. No. This doesn’t change anything much really.

You point to Zune, Windows Phone, Surface, and Bing from Microsoft not putting anybody out of business. But what about MS acquisitions? Will those be a threat to startups?

One thing is obvious: MS has a lot of sales through partners and a global reach. We are not underestimating that. At the same time, if we look at Windows Phone, they are far behind the top players in the space, iPhone and Android. It is not because the customer wouldn’t give them a chance. Every year or so people are changing phones. But when the customer goes out to the market, it is very clear to them that the iPhone and Android are really good and going to be relevant in the future as well. Windows Phone does not offer a great experience is the general verdict.

Similarly, there are enough good alternatives to choose from in the customer management space too. It was never as if Parature was winning in this space. It was only in 2011 that they were able to gain some traction. Otherwise, obviously, Microsoft wouldn’t have got into the acquisition.

To cut a long story short, the customer today is able to find out the best product in the market quite easily. If you want to buy customer support tools today, you will go online and search for the best system, you will quickly pin down 2-3 players, evaluate them and buy what you like most.

So what we know is that unless the product is outstanding, customers are not going to switch or choose them over others. At the end of the day, it all boils down to having a product that is really good and customers who are aware of what is in the market and how to find better ones.

Basically what I am saying is that for MS Dynamics to put us out of market, they need much more than acquiring a knowledge base or integration.