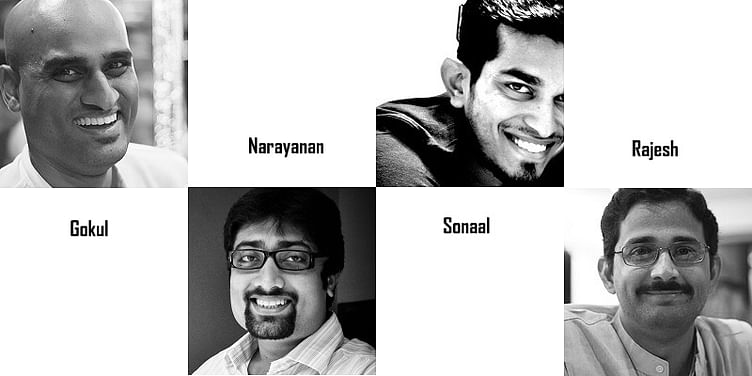 When the team members at Effect Works built Extragram - an Instagram web viewer featured in the likes of Mashable and AppStorm, they had a couple of more product ideas, specifically for mobile.

To build these products, they formed a new venture and called it No F*cking Name Labs (NFN Labs) for lack of a better name.

NFN Labs is a bootstrapped company which undertakes development work only for those projects which have a big design component (clients who want to be involved from ideation to execution). “As of now, the Effect Works and NFN teams work under the same roof. Effect Works executes the design and NFN Labs is in charge of the delivery of the product,” says Sonaal Bangera, product and design evangelist, NFN Labs, pointing out the close coordination in design and development as a major differentiator. “For customers, it means no more coordinating with two different vendors,” he adds.

Brainchild of Narayanan Hariharan, Sonaal Bangera, Gokul Visweswaran and Rajesh Padmanabhan, NFN Labs’ products were created to solve their own problems first. Below is the list of utility Apps developed by NFN Labs and Effect Works together:

This app provides all the information present in a Hindu calendar. It can calculate the day and time for auspicious ceremonies based on geographic locations. The app sees 50-60 downloads daily.

After some great response from users and increased familiarity of the team with iOS, the next step was to tame the beast called Android (the really wild kind). “Gokul and Rajesh are frequent train travellers. You know how important it is to check the train PNR status when you are on the waiting list. But God help you with the Indian Railway’s ‘superfast’ website,” adds Sonaal sarcastically.

With this App you need to enter your PNR number just once and the App will remember it. It will provide a notification when there is a change in the waiting list, saving you the anxiety of checking every time. The other good part is it will also give you the coach and seat number before the train’s departure. The App provides more than four lakh PNR status notifications a month.

A quick survey led by Narayanan indicated that people had a tough time trying to figure out what taxes are applicable on your food bill and at what rate. To solve this they created an Android App in two days and called Bill Check, which allows you to quickly verify your restaurant bill taxes.

Sonaal, who heads product design, used to meet clients taking them through the App design workflows and interactions. The walkthroughs would be on slideshows (the sequential nature of slides can get boring) and interactions were just named, not showcased in actual working.

He thought there should be an easier way to showcase App ideas, designs and workflows. Hence, Demonstrate was born, which allows designers, App developers, startups and IT companies to showcase their App ideas and workflows like a native App without writing a single line of code. It has just been two months since Demonstrate launched and in the first month itself they had more than 25 paying customers.

To develop these products, Effect Works decided to hire new talents. “Much of the talent available in the open market was either too expensive or had fake resume,” says Sonaal.

“Acquiring talent is a big challenge,” says Sonaal. NFN receives fake resume every day. To tackle this problem, they give the candidates a simple problem to solve. “If after a week, the candidate is unable to respond with a solution, we know he/she is the wrong person. This filters about 95% of the profiles. Clearly, there is a scarcity of Mobile App Development (M.A.D) talent. We have started tying up with colleges (Star Lion College, Namakkal & Mount Zion College, Pudukottai) to set up M.A.D Centers of Excellence and instil the best practices of App development,” adds Sonaal.

Meanwhile, NFN is working on a couple of revolutionary ideas. It will be seeking funds soon to raise capital. Watch this space.