Anita Dongre, the designer who broke societal stereotypes to be an entrepreneur 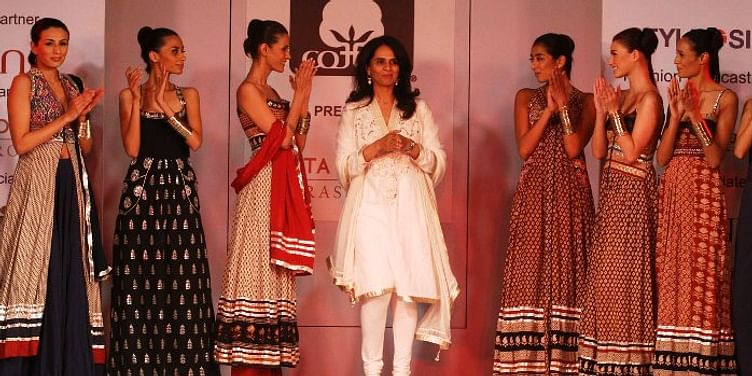 For 50-year-old Anita Dongre, life has been an interesting journey as a woman. She was born in a traditional Indian household where women played all the stereotypical roles that society expects them to. Her cousins, aunts, sisters and other women in the extended family were happy being wives and mothers. But despite being born in a traditional household, life had different plans for Anita.

“I grew up in a fairly traditional Sindhi family. My grandparents were from Jaipur. I spent lot of my summer vacations in Jaipur and even as a child I noticed how restrictive the environment was for my cousins there. My father moved to Mumbai just a few months before I was born. Mumbai was a very different place. Here women had careers, and were entrepreneurs,” recalls Anita. There were no women entrepreneurs in her family. None of the women in her extended family of 50 cousins ever worked anywhere. So when Anita took up a job after her internship, everyone in the family was shocked. “There was total shock and I was subjected to a lot of counselling. Back then it was assumed that if a woman wanted to work it meant that her family was unable to look after her financially,” says Anita.

But now all that seems a long time ago. Today, Anita Dongre is among the foremost fashion designers in the country and has dressed many well-known and unknown faces. HerStory caught up with this super seamstress to chalk her entrepreneurial journey.

Compared to what lay ahead in her life as an entrepreneur, family objections were perhaps the most easy to tackle. Anita’s pull towards fashion happened at a very young age, when she saw the women in her house create beautiful stuff with fabrics. Her mother Pushpa Sawlani was a skilled artist, who stitched clothes for Anita and her siblings when they were young.

Next step towards her dream was a degree in fashion from SNDT University, Mumbai. “Design and fashion was the only thing that interested me even as a 15-year-old. Many friends whom I studied commerce with in NM college, became chartered accountants. But I found that very boring. Only fashion excited me. So I was sure this was what I was going to do,” says Anita.She started the business with her younger sister in a small 300 square foot area and few years down the line her younger brother joined the business too. The initial years were tough, because they didn’t have a place to work from and had to constantly move from place to place. “There have been tough times and in those early years I did think of giving up a couple of times, but that was very momentary. I would wake up in the morning and say, what the hell, I will do it,” recollects Anita. There were times when their landlord threw them out because they failed to pay their rent, she claims.

“Money was a huge problem in the first few years. But after that, it was ok. I think for an entrepreneur everyday is a challenge. Everyday throws up new challenges. Even today at this stage I face challenges daily but I think you just have to learn to deal with them,” she adds.

While fashion is her love, Anita Dongre has also been very focused in the way she did business. Today, her company is called AND Designs India Ltd (ADIL) and it has four labels under it. AND was launched in 1999 and retails western wear, Global Desi, launched in 2007, sells ethnic wear, Intrepret is a line of everyday clothing, Timeless is bridal wear and Grassroot stands for organic fashion. However, Anita says she doesn’t spend much time strategizing or drawing business plans when it comes to launching new product lines.

Following her heart has been her strategy for expansion. Even the reason to launch her own brand was because the stores where she would supply her clothes to refused to take her creations of western wear. “About 14-15 years ago I created a collection of clothes I really liked which catered to the growing population of young women who had started working and were open to experimenting with western outfits. But none of the shops I supplied to would accept it. I got so angry that I decided I will do this myself, and that’s how Anita Dongre Designs was born,” says the designer with a smile.

“I attribute my business acumen to my gut feel. I don’t do any market research, I do things very instinctively. Because my clothes (it was a beautiful collection) were rejected by every other store, I got really angry and I opened my own store,” she explains. Anita admits that she is not too fond of the business part of entrepreneurship, but understands that it is a vital part of being an entrepreneur. However, given a chance, she says, she would just like to only design all the time.

At present, AND is retailed through 250 points of sale, which include 41 exclusive stores and over 200 other established multi-brand lifestyle formats like Shoppers’ Stop, Lifestyle, Central, Kapsons & Pantaloon.  Global Desi has 54 exclusive outlets and presence in 130 MBOs. Global Desi also opened its first store in Mauritius this year. Timeless and Iinterpret are present across nine Anita Dongre exclusive stores across India.

Although Anita recently opened two Global Desi stores in Mauritius, she continues to be bullish about ample opportunities that exist within our country. “A dear friend told me 20 years ago that had I been in the US when I started the business, I would have been 100 times bigger than what I am now. But it is ok. I love creating Indian stuff and there are many opportunities that exist here,” she says. 2015 has been earmarked for aggressive expansion abroad.

Her family has been a very important part of her life – they have been her pillars of strength both within and outside the business. Her father lent her the first capital to start her business, for which he charged her interest just like any professional loan she would have taken. “My father was a tough man and I am glad he was not an indulgent father and taught me the value of money. Even today when my sister and I run the company we think of him whenever we have to take crucial financial decisions. He taught us to respect money and that is very important,” she says.

Her brother and sister handle the operations and retail side of the business, while Anita continues to lead on the design front. She says there are still many things that she wants to do in life and probably this lifetime is not going to be sufficient for it. Predictably her core focus is on design, and how to remain ahead of the curve.

The company recently purchased an 180,000 sq.ft. facility in Rabale, Navi Mumbai, with the plan to integrate all its production activities. This is also important from the point of view of quality control, which will be key for their international outings.In 2008, Future Group had picked up 23% stake in Anita’s business and there have been reports of them exiting the firm by sale of stake to private equity firm General Atlantic. Reports suggest an investment of Rs 150 crore by General Atlantic in ADIL for a minority stake.

Anita says she loves making clothes and wants to do this for as long as she can. And despite the disappointments and failures, she says it’s hard for her to stop working. “It’s a blessing to be able to dress people, give them fashion, make women feel good about themselves. I am going to work till the end. What I would like to leave behind is a fantastic fashion house that believes in the value system we have set,” says Anita.

Be happy, stay happy and be proud of what you are doing, is Anita’s advise to women who are thinking entrepreneurship. Have a good intention, and look at whatever you do as the beginning of something that you are going to do absolutely well. “You can never start anything thinking you want to make lots of money. Do your best and the rest just follows,” states Anita.