Bhaag startup bhaag – the stories of 11 student entrepreneurs from India 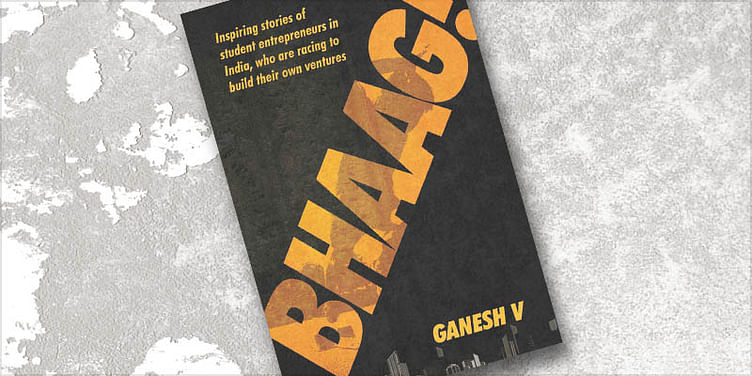 The entrepreneur movement is spreading well beyond big cities and major universities in India, and is marked by a new seriousness and focus -- as shown by the 11 startup stories in the new book, Bhaag.

Youngsters today are more assertive, plugged into the latest waves of online media, bold enough to test their ideas, and not worried about getting another job even if their startup ventures fail initially. The startup ecosystem in India is now amplified by a range of incubators, accelerators, investors, media resources, startup platforms, competitions, awards and even government grants. These include the National Entrepreneurship Network, Indus Entrepreneurs, Indian Angel Network, T Labs, Startup Village, Startup Centre, Tata First Dot, Bloomberg Pitch, Power of Ideas (IIM, DST) and YourStory.The book (158 pages, published by Notion Press) makes for a quick read and will particularly appeal to young aspiring entrepreneurs. The author, V.Ganesh, is a Bangalore-based marketing consultant and has himself been an entrepreneur. Each startup profile in his book is about 10-15 pages in length, and includes key takeaways along with the ups and downs of each entrepreneur journey in a range of cities and sectors.

Arpit Mohan and Abhishek Nayak started GharPay Technological Services in 2011 in Hyderabad, in the area of digital commerce. They met at BITS Pilani, and Abhishek’s internship at Bloomberg in Hyderabad exposed him to the attitudes of Europeans, where people set their own personal goals rather than being caught up in the rat race. He and Arpit ploughed through 18 ideas before settling in on the e-commerce boom – cash on delivery (CoD) services. They offered CoD to clients such as RedBus, MeraEvents, Jet Airways and ClearTrip.com, and the company received investment from Sequoia in 2011. They later sold GharPay to Delhivery, and pivoted to create a new product called ClinkNow (predictive purchase analytics).

Prasad Gundecha and Akshat Oswal launched Tech Innovance in 2012, offering home and building automation solutions based on certification received for German product ranges. The two actually began by first selling khakhra in Kamla Nehru Park in Pune as part of a college activity called Out of the Box, where students had to make at least Rs. 300 per head every alternate Thursday via some business activity. They later latched onto the construction boom in India, and set up an Experience Centre for customers to understand automation solutions.

Vijith Padmanabhan started DoLoJo (“do, love, enjoy”) in 2013 as a social networking application with products such as BlueBag (bookmarking with screen grabs) and ShoutCrow (sharing content along with video clipping features). He is an ‘ideas man’ brimming with ideas and plans in various stages of exploration and execution, and embraces ‘strangeness’ as well as meditation. Vijith began launching products when he was in the third year at Model Engineering College in Kochi, and incubated his company at Startup Village after a useful internship in digital branding at design firm Salt Mango Tree.

Aditya Gupta and Karan Kumar founded iGenero in 2008 in Hyderabad to offer digital marketing solutions. Aditya also runs another startup networking event called Social Samosa in Bangalore. After engineering, he was exposed to the world of the Internet while working for Azri Solutions in Hyderabad. He and his friends evaluated business options such as corporate gifting services and even bike riding gear, before settling on digital content. A serendipitous break was getting an order for designing the website for George Washington University to which Aditya had applied for grad school but deferred his admission. They faced some challenges on the recruitment front for some time (eg. dealing with age diversity) and also had conflicting advice on whether to grow organically or get outside investors.

Sahil Baghla and Ayush Varshney founded BlueGape Lifestyle in 2011 to secure fan merchandise IP and distribute the portfolio. They actually began by offering IIT entrance coaching classes when they were still students at IIT Kanpur, and then dabbled in hydroponics after a semester in the US. They then began printing and distributing celebrity posters on campus, and then other kinds of merchandise. Advice and investment from T Labs led them down the fan merchandise route, and their e-commerce clients now range from Krish and Indian Ocean to Parikrama and Anupam Kher.

Priyadeep Sinha founded Gyan Lab in 2011 to enhance school learning via activity kits. He was studying engineering at Manipal University and won a business plan competition along with batchmate Abhash. They also won an award to be selected by the local incubator, and evolved a business model which included a Lab Coach for school settings. They won other awards and cash grants as well (Dell Social Innovation Challenge, Power of Ideas), and are looking to expand to a dozen centres.

Sarah D’Souza and Amit Vernekar founded BioSyl Technologies in 2012 in Hubli. They met as classmates at BVB College of Engineering and Technology, and became interested in creating chambers for the growth of anaerobic bacteria. Their idea received support from mentors, and they won awards at National Tech Fest, a Karnataka tech fest, and Tata First Dot.

Swati Bondia started the social enterprise Om Shanti Traders in Bangalore in 2011 to create ethnic handicrafts and also give employment to marginalised communities. Though she came from a business family (Marwaris) and had a natural business sense, she pursued an independent path without seed funding from her family. Swati was moved by the plight of a migrant family, but chose a sustainable business route to help them. Exposure at a trade fair and advice from mentor professors gave her more creative ideas, and her first break in corporate gifting was from The Leela Palace hotel.

Avi Bhattacharya launched Centre Stage Dance Company in 2012. He came from an artistic family, and branched out into dance as a hobby and profession when he came to Pune to study engineering. His passion for dance as a lifestyle and his dedication to professionalism and quality led to a string of jobs in local dance studios – but he struck out on his own with another dance colleague. Avi also won the Tata First Dot Contest, and is formally incorporating his studio.

Priyanka Amar Shah founded iKheti in 2012 to help set up and maintain sustainable urban farms. Her business plan for kitchen gardens in cities won a competition at her college, Welingkar Institute of Management in Mumbai. She also took part in the TV program The Pitch and even got endorsement by then President Prathiba Patil. Priyanka validated her ideas with industry experts and potential customers. Her startup now offers products as well as design and consulting services, and she plans to expand to corporate customers as well.

Annu Grover started Nurturing Green in 2010 in Delhi to sell plants as gifts and décor items. He studied in Noida and discovered the joy of plants as gifts when he went to Austria on a business program. Annu consulted for a firm helping European companies set up shop in India, and then returned to India to work in the area of conservation. He experimented with a branded potted plant gifting service before moving to the larger décor segment. He won the Power of Ideas competition, and a YouTube video helped attract funding from a Dubai firm. Now he has set up 26 retail outlets in four cities.

A range of useful lessons are offered by these stories. Be convinced about the value of your idea – or be equally convinced that it will not work. Set yourself goals and time limits, and think of where you personally want to be 5-10 years down the road. Pick something you enjoy doing well and are good at.

Startups are all about people; create a culture of belonging and ownership in your company. Having good mentors helps throughout the entrepreneurial journey. Technique and skills are as important as talent. Keep benchmarking your venture and stay plugged in to your surroundings.

Test every single assumption in your business model. Do not be put off by failures, they are the pillars of success and should be regarded only as business detours. Learn from failures and don’t repeat the mistake. Overcome the fear of failure with calculated risks and in-depth research.

Do not look for quick money or easy gratification – be ready to wait long for the rewards. Have patience and faith as even money can run out and people may stop believing in you. If necessity is the mother of invention, desperation is the father. Look for inspiration from words of wisdom and wit.

Entrepreneur Annu Grover has a collection of more than 100 quotes and sayings about life and entrepreneurship, and they invariably inspire him and cure his anxiety or disappointment. Here are some of his favourites, along with others in the book:

Choose the job you love and you will never have to work a day in your life. – Confucius

A ship is safe in harbor, but that is not what ships are built for. – William Shedd

Those who were seen dancing were thought to be insane by those who could not hear the music. – Friedrich Nietzsche

If opportunity does not knock, build a door. – Milton Berle