Swipe bids to sweep the tablet market in India 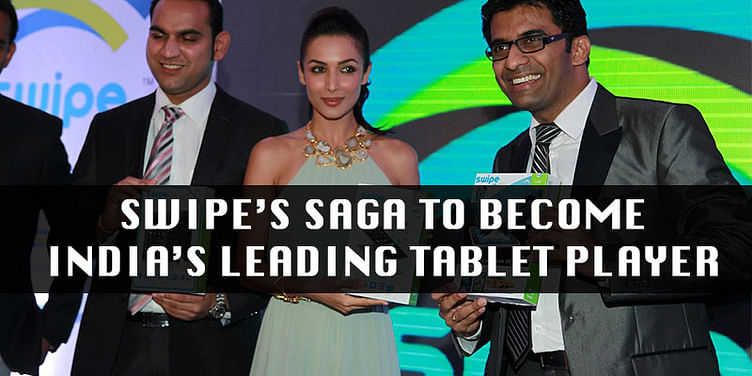 From its humble origins as an idea to empower everyone with the latest technologies, Pune-based Swipe Telecom has grown to be a force identified with providing quality products at affordable prices.

Last week, Swipe Telecom announced that it received INR 30 crore in funding from one of India's leading investors Kalaari Capital. Swipe has launched a range of tablet catering to the needs of youngsters and professionals in India.

Shripal Gandhi was one among thousands of excited Indians who had ordered Akash Tablet as soon as Datawind announced the low price point tablets. But like many others, he never received the tablet. That seeded the idea for the launch of Swipe Telecom. "Akash did good for me, I realized the demand for affordable tablets in India and jumped at the opportunity."

Swipe was started by Shripal Gandhi and Aman Gupta along with a five-member team in 2012. Now it’s a 100-member strong team based in Pune.

Before starting Swipe in July 2012, Shirpal worked for seven years with a nanotechnology startup, interacting with companies like Apple, Samsung and Motorola on developing next generation touch screen technologies for handsets and portable navigation devices and other consumer electronic products. He holds 11 patents for his work.

Shripal believes that instead of keeping Swipe just a pure-play hardware player, his focus has always been on providing users with an end-to-end service along with the tablet.

The company has a range of 23 devices in the tablets and phablets space, including the first 3D tablet and the first tablet customized for kids in India, offered within the price range of INR 4000-15000.

Their tablets have good presence in Rajasthan, Punjab, Chandigarh, Himachal Pradesh and J&K. It’s among the top two sellers in Mumbai and Gujarat. It’s amazing to see how this company is taking the challenge in the low-cost tablet market where Micromax is the leader.

Talking about innovation in delivery, distribution and end user experiences, Shripal says, "We are the first ones to launch a 3D tablet for India. We have a partnership with MTV, which has worked well for us. While we are good at hardware, techno

logy and applications, MTV is good at distribution and marketing. We leverage each other’s strengths to reach out to the youth from all across India. The response for our co-branded products has been great."

India is experiencing a smartphone revolution and will have the second largest smartphone market after China very soon. According to the IDC report, the tablet shipment from India had touched 4.14 million units in 2013 and this number is going to rise in the coming years. This market is expected to grow 9% YOY basis giving enough space for local manufactures to compete.

When probed about the competition, Shripal adds, "Who is the other pure play tablet maker for Indian market? Who else has the range of price points that we have to offer?"

While most Indian companies are sidelining tablets for smartphones, Swipe has a single focus on tablets, which may help the company to become the leading tablet manufacturer in India soon.

In 2014, adoption of tablets in education vertical in India is estimated to reach 225K to 250K devices.

Akash tablets were launched in India with the idea of providing low-cost solutions for the spread of education among the low-income population. Swipe too is trying hard to help this cause. Educational content is probably the focus area for all the major tablet players in India. Swipe is providing tablets with pre-loaded education content, which is a good strategy to appeal to consumers in the market.

"We worked with UNICEF to distribute tablets to women in rural regions of Rajasthan. The response was phenomenal. Every woman who received the tablet has trained 2000 other women on how to use tablets for educational purposes. We also have medical content on our tablets and it has helped women to learn about issues related to pregnancy and sexual health," adds Shripal.

As the world goes mobile, enterprise and retail sectors are also undergoing this transformation. More recently, there has been a huge rise in sales of mobile point of sale systems in India. Enterprise softwares are moving away from desktop and releasing its apps for customers to use them on tablets.

He adds, "A 4-inch mobile phone is too small for sales representatives to enter bills etc, but a 6-8 inch tablet is ideal for this purpose. As Internet penetration increases, the demand for tablets will explode in India."

The recent INR 30 crores round by Kalaari Capital will enable Swipe to focus on product development and expand its market presence in India.With the infusion of Kalaari funding, Shripal is extremely excited about Swipe's future. Shripal says, "We are sure to grow at least three times in the next three quarters. We want to spread across India first before expanding to other territories in India."

Swipe, which is addressing a huge market here, is proving to be a perfect hardware success story in India.

Do you think Swipe can compete in this challenging market along with Apple, Lenovo, Micromax, Lava, Asus, etc.?