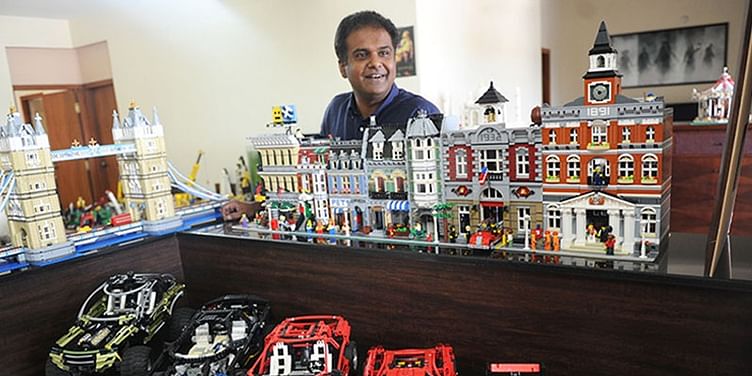 In John Seemon's apartment on the fourth floor of a modest building across the swanky DLF layout in Bangalore, there is a room he calls "man-cave". It could well be an anarchist's laboratory.

A large wooden table that he built stands at the centre with wires protruding from above and below. Miniature building material, half-done structures, tools, brushes, cartons of accessories and sundry other objects are piled up on it. On the floor, there are bins -- large translucent blue and white plastic boxes -- filled with building material. There's another table by the side overflowing with tools -- pliers, tweezers, hammers. Under it, acrylic paints in little bottles queue up. Floor-to-ceiling shelves on the sides have books -- most of them manuals and guides. "People are often surprised by how I know exactly what is where," he says, picking up a leaflet on a modular set he had built. Boxes filled with Lego bricks -- tens of thousands of them -- of every color, shape and size crowd the floor of the next room. He bought most of them during stints in the US, Australia, Singapore and France. Some were lucky buys in India.

The rest of the house, big for a single man, is neat. It is two houses in one actually. John bought adjacent apartments, took down the intervening wall, and redesigned the space for him, his Lego structures and a model rail collection. From furniture to wiring to a fish tank on the balcony, he sketched and built most of it. "I am a bit of a carpenter, electrician, plumber, architect and builder," this techie tells me.

Starting up in Mangalore

After completing BSc in Computer Science from St Aloysius College, Mangalore, John arrived at a crossroad. He found it tough to land a secure IT job right away; the jobs that came his way were not very challenging. His dad was running a computer training franchise of NIIT in Mangalore then. “I thought it would be a better idea to start a small IT firm in Mangalore. In the early days, it was mainly developing custom software for local businesses. And then, I started reselling packaged software like Sybase, Oracle etc. I was able to secure a contract from Infosys to supply contractors, mainly for staffing in Y2K projects,” John recalls.

He sold the company towards the end of 1999, and moved to Bangalore. Having successfully run a company, IT majors here were keen to have him on board. And since then, he has been working with several giants of the space, travelling to different parts of the world for work and pleasure.

The police station in the living room

A bunch of his Lego models -- trucks, jeeps, cranes, a Mercedes Unimog, a JCB excavator, tankers and a police station -- stay in the living room. On the bar counter is a London Bridge and a street of complex modular structures with tiny people inside and outside. Eyes gleaming, he points out the embellishments. "Do you see that post-box? The cap hung on the wall? That frog on the door sill?" he asks. On the dining table -- or what it once was -- is a Nscale (1:150) model rail with two trains running. A Taj Mahal and a musical carousel diagonally face them. There are two cupboards filled with model trains and vehicles in two other rooms. "This is just 30 percent of what I own," he says -- the rest are inside bins.

In Lego terminology, John is an AFOL (adult fan of Lego) and a master builder: he can sift through millions of small Lego pieces or "elements" -- each of which can be connected to others in countless ways -- see the "system" and build a structure. This techie has been doing this for 16 years and is one of the largest Lego collectors in India with close to 300,000 bricks.

John led 1500 kids and adults to build an 8 X 12 foot fire truck at Phoenix Mall, Mumbai, in 2011. It is the biggest Lego structure in India and got into the Limca Books of Records.

Funskool India Ltd are the official Lego distributors in India. John is their unofficial, unpaid tech support guy in Bangalore.

The Lego bug has bitten millions worldwide. The colourful plastic bricks that can be assembled and connected in many ways, to construct such objects as vehicles, buildings, and even working robots are accompanied by an array of gears, minifigures and various other parts. That anything constructed using Lego can be taken apart again, and the pieces used to make other objects, added to the appeal.The Lego Group began in the workshop of Ole Kirk Christiansen, a carpenter from Billund, Denmark. He began making wooden toys in 1932. It was an instant hit, and in 1934, his company came to be called ‘Lego’ from Danish phrase ‘leg godt’, meaning ‘play well’. The company expanded to producing plastic toys in 1947, and by 1949, began producing, among other new products, an early version of the now famous interlocking bricks, calling them ‘Automatic Binding Bricks’.

According to Wikipedia, as of 2013, around 560 billion Lego parts had been produced.

The cult following spawned a Lego ecosystem in the West with dedicated museums, workshops, contests, clubs and networks like LUGNET (Lego Users Group Network). The culture has seeped to India with its share of big collectors and enthusiasts.

John runs an online forum for Lego fans in India, lugindia.org. Members discuss queries, post pictures of their Lego structures and connect with each other. But not many are master builders. That's probably because building huge structures involves advanced mathematical skills too.

Measurement in Lego is, usually, done by counting the number of studs -- the round elevated tops on Legobricks. The basic brick has eight studs, two studs wide and four studs long. "When I had to build the larger version of a model truck in regular scale, I had to multiply it six times all ways. That meant the larger version of the basic brick was now 12 studs wide and 24 studs in length in comparison. This allowed for a 1:6 ratio. That meant I had to use 96 regular bricks to create an outline of a larger brick six times its original size. We got children to build thousands of the larger version of the brick (each built using 96 standard bricks) in various colours (red, blue, white, etc.) for the model," John recalls.You would imagine Lego enthusiasts are driven by creativity. But John insists that he isn't the creative sort. "I am very patient and I like to build," he says. "There are days when I wake up in the morning, start building, and realise only in the evening that I need to eat." The Lego Taj Mahal took him 30 hours to build. "That's how Lego is. It is addictive," he explains.

John's father, a civil engineer, and brothers -- one is an architect and the other a software engineer -- don't share his passion. "My mother likes it. When she visits, she takes down a few of my sets and builds them up again."

He is also a model railway hobbyist. He lays miniature train tracks, wires them up so that tiny trains wouldn't derail, and builds elaborate stations and layouts around them. This demands fine-scale modelling -- meaning super-steady hands, keen eyes and a vivid imagination.

What makes him invest so much of himself -- time, money and effort -- into these hobbies? John struggles to answer. A child-like pleasure maybe, he says at first. "I remember dismantling a moped when I was about 16. I took apart the whole thing, and couldn't put it back together. After my pre-university, I wrote the entrance exam to study architecture but didn't get through. That surprised me as I was always interested in building structures." Lego and model rail could be his way of getting back, perhaps.

While talking, he has begun to make a miniscule chair. In his large hands, the chair isn't even as big as the nail of his little finger. He holds it with a tweezer, sticks two legs to the sides and carefully waits for the glue to dry. A thought strikes him. "The thrill is in the process. At the end, yes there is a sense of accomplishment. But almost immediately, you are thinking of the next project."

The startup bug, which had bit him years ago, is now back. John is itching to startup again, and is toying with ideas. He doesn’t want to reveal anything right now but has promised to tell us first!

Are you a Lego fanatic? What’s your favourite poison? Tell us in the comments below.