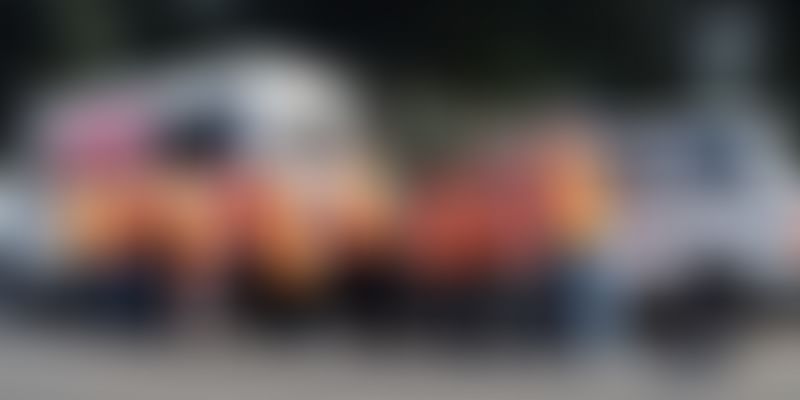 Two boys, about 10 years old, were playing football in a park. They noticed a very poor child, roughly their age, in nothing but rags. The two compassionate boys decided it was up to them to help the poor child. They put together a few rupees, took the poor boy to the nearby tea stall to feed him.

Out of the two thoughtful kids, one was Nitaidas Mukherjee. This little act of kindness would be his first step towards founding an NGO that, according to him, has been involved in nearly every rescue operation carried out in Kolkata.

HIVE India (HIVE initially stood for HIV + Emergency) was the brainchild of the late Dr. Rakesh Agarwal and Nitaidas. Today, it boasts of 15 fulltime members, an association with all the 79 police stations of Kolkata, a coverage area of 216 sq. km and associations with multiple wings of the City and State Police and Government organizations such as the Special Juvenile Police Unit, Disaster Management Group, Women Grievance Cell, Child Welfare Committee of Kolkata and adjoining districts, Fire and Emergency Services Department of West Bengal, etc.

HIVE was started 20 years ago, prior to which Nitaidas ran a smaller scale of operations.

We at YourStory spoke with him to find out about his journey before and after HIVE India.

YS: Can you tell us a little bit about yourself?

NM: My father was a social worker himself, so he was my first point of contact and primary inspiration when it came to social work. I take great inspiration from the work done by Swami Vivekananda and Subhash Chandra Bose. “Arise, Awake and stop not, till the goal is reached,” a quote by the Swamiji always deeply resonated with me. Although I didn’t get into full-fledged social work until my graduation, I used to just involve myself in random acts of kindness till then.

I started a small social organization in about 1989-1990, where I got hold of a really old ambulance and started rescuing dying people off the streets. During this time, I came across Dr. Samir Chaudhuri, the Founder of CINI (Child in Need India), and he encouraged me to do a lot more. I soon started a clinic on the pavement and went on like this for a while with support from CINI. Once CINI stopped funding us, our activities also died down for about a year and a half; the activities became very sporadic.

I decided to start HIVE India in 1999. We partnered with the HOPE Foundation, Ireland.

YS: What activities does HIVE involve itself in?

NM: I had one goal with HIVE, and that was to rescue as many people as we could, and go beyond. We have our hands dipped in everything. We had initially started with just one initiative, our emergency response unit, but we’ve come a very long way since there.

Rehabilitation of families – There was a huge fire in a slum near a railway station. We were able to rehabilitate around 500 families by running medical programs and starting schools. We set up weekly medical camps in about 10 different spots in the area to run it like a program.

Child protection – We got into the child protection issue as well. We have no formal treaty that we’ve signed with the police, but we work together to fix issues in particular problem areas. We once found a little girl crying on the street at midnight during winter, and since that day we’ve started patrolling the streets in the nights as well; mostly the vulnerable areas – we’ve ended up saving a lot of lives. We work very closely with the Child Welfare Committee.

Anti-Trafficking – We have invested a lot of effort in creating awareness programs and protection mechanisms. We have been able to protect and rescue a lot of women and children that way.

Emergency Response Unit – This is our primary program. We are on duty 24X7 to assist anyone in the times of disaster. We work with multiple agencies to extend our reach and strengthen our services. We primarily service at-risk people, vulnerable children and situations of disaster.

Dealing with the mentally ill on the streets, with the aid of the police.

We are going to open an emergency Night Rescue Center for women dedicated for the Kolkata Police to utilize.

YS: Where do you get your funding from?

NM: We get our primary funding from the HOPE Foundation, Ireland. Besides that, we get funds from corporates in the form of CSR aid. A lot of the citizens have donated both time and money to help with this cause.

YS: What have been some of the challenges?

NM: The challenges have been plenty! Getting people to trust you, I think, has been one of the biggest hurdles we’ve had to get past. Besides that we’ve had huge challenges in covering such a large area, to optimize the limited resources at hand, and to build collaborations with government agencies.

It took us about 2-3 years to convince the police to work with us; they were hugely skeptical about our efforts. But with consistent efforts they finally realized that we have the machinery in place to save the lives of thousands of people. We now have a sort of joint-action plan with the police.

We’ve had very tough experiences working with the government hospitals. They would refuse to admit some of the people we would bring in. I had to struggle to try and convince the doctors. I started helping around in the hospitals to gain some trust. I used to arrange medicines, help with the chores at the hospitals till I could convince the doctors that I am as serious about this as they should be about their own profession. I once waited from 11PM to 6AM with a patient, because no doctors were willing to take a look at the patient! I sat there till the doctor finally came and said “You’ve passed,” and decided to look at the patient.

YS: Can you give us a couple of examples of the collaborations you share?

NM: A lot of the people we rescue have actually been registered as missing persons. Some of them have been kidnapped, or they’ve run away and now lost their way, or they might be very old or mentally ill. We work with the Missing Persons Squads of the State and City Police. We share data with these departments and work collaboratively to rescue people.

Five years ago during Durga Pooja, we rescued a little girl who had been kidnapped. I think she had escaped and she was running away when we found her. Unfortunately, since it was Durga Pooja, the police force was stretched and our efforts to return the girl back to her family became extremely difficult. In the light of that event, and to avoid such a situation again, we’ve now started a program with the police. We have Missing Child and Women Protection Flying Squad units stationed in different locations. These units are made of police officers and social volunteers and they are equipped with first aid boxes, clothes, blankets and toys. Last year’s Durga Pooja we had about 8-9 functional squads and 1-2 additional squads.

YS: What advice would you have for some of the other NGOs working in a similar field?

NM: 1. Everybody should be treated with dignity.