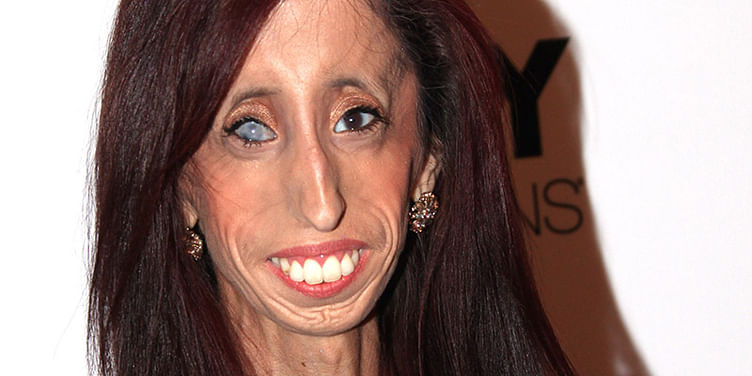 Lizzie Velásquez did not know that an interview she gave to a local TV channel would change her life forever. The interview appeared on YouTube with the title, ‘The World’s Ugliest Woman’. There were comments on YouTube referring to her as ‘it’ and ‘monster’, and by the time she found the video there were already four million views. Peoplecommented, “Lizzie please, do this world a favour, put a gun to your head and kill yourself.”

Lizzie suffers from an extremely rare syndrome due to which she cannot gain weight. Besides her, only two more people in the world suffer from this syndrome. Due to this, she has 0% body fat, and her body cannot store it. She has to constantly eat every 15 minutes in order to stay normal. The highest she has ever weighed is 64 pounds (29 kgs). She is also visually impaired in the right eye. Though for others it might be a big deal, but she says this has been the greatest blessing of her life. “I can eat whatever I want without getting fat,” she reportedly jokes.

When Lizzie was born, doctors said she would never be able to talk, crawl, and basically be able to do anything else by herself. Her parents did not get disappointed and raised her to the best of their abilities. She is reported to have said that her mom has been her greatest support who instilled a fighting spirit in her. When she first went to school, she looked like a turtle as her backpack was much bigger than she was. She says nobody wanted to talk to her.

When Lizzie asked her parents what was different about her, they said. “Yes, you are smaller than the other kids and you have this syndrome, but that is not going to define who you are. You are going to go to school, keep your head up and continue to be yourself.”

“I thought what defines me was my outer experience — that I was ugly. I thought I was disgusting. I hated it when I would wake up in the morning and look into the mirror. I realised that my life was in my hands, I can choose to make it really good or make it really bad. I am going to let my goals, my success and accomplishments define me.”

Lizzie is now a motivational speaker and has written three books. Her first book titled, ‘Lizzie Beautiful’, talks about her struggles and living in a society where a huge amount of importance is given to outer appearance. The book contains journal entries her mother wrote to her when Lizzie was a child. The book is a source of inspiration for many people. Her second book titled, ‘Be Beautiful, Be You’, contains her advice for people who are dealing with low self esteem. It also deals with bullying and negativity, personal meditation and setting realistic goals.

This is what an editorial review on the back cover of her second book says,

“In a world filled with airbrushed celebrity photos and plastic surgery, Lizzie Velasquez is a refreshing force of nature whose story will inspire anyone who has ever felt singled out, misunderstood, or afraid—and who hasn’t?”

At present, Lizzie is working on a documentary which is mainly focused on the fight against bullying to make sure no one else suffers due to bullying.

We wish her success in her mission. When all of us get depressed over small issues, Lizzie comes across as an inspiration to the world.