To be a successful entrepreneur you must keep up with best practices: Derek Lidow, author, Startup Leadership 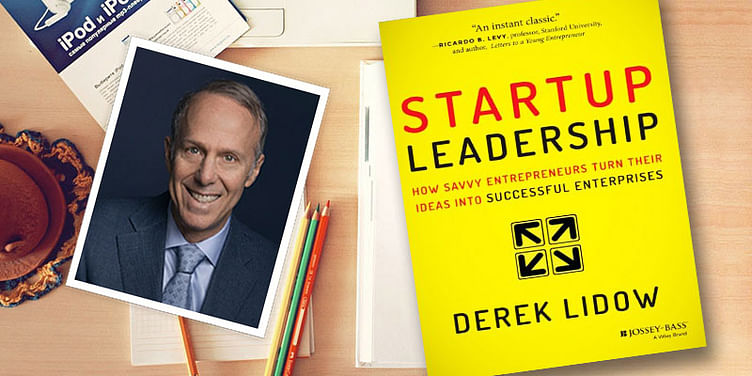 Derek Lidow is the author of Startup Leadership (see my review), and was founder and CEO of iSuppli which he sold to IHS in 2010 for over $100 million. He graduated from Princeton and Stanford where he earned a PhD in applied physics. Lidow is an expert in the electronics industry and consulted for companies such as Sony, Samsung, Philips and IBM. He teaches entrepreneurial leadership, creativity, innovation and design at Princeton University.

YS: What is your current field of research in entrepreneurship?

DL: I address two questions: what is the best way to teach the skills that directly increase an aspiring entrepreneur's chances of being successful; and what exactly is the impact of motivation on entrepreneurial success.

YS: How was your book received?

DL: My goal in writing Startup Leadership has been to help entrepreneurs be more successful. Many entrepreneurs have written to me or contacted me after reading the book with stories about how the book pointed out something specific they could change that solved a big problem they were experiencing, or somehow allowed them to take their startup to a new level of performance.

This is extremely gratifying. The fact that the book has been read by so many people and received such good reviews also feels good but these feeling are nowhere near as important as hearing how it has helped people be more successful.

Perhaps unexpectedly, the book has generated quite a few comments on how it has helped situations outside of startups. I have had several people comment how the sections on relationship building and leading change have helped solved some marital and family issues. A couple of sports team captains and managers have mentioned that the book pointed out to them how to solve some tough issues with their teammates.

YS: In the time since your book was published, what are some notable new startups and leaders you have come across?

DL: I meet new entrepreneurs almost every day and the release of the book has definitely increased the rate at which I meet new entrepreneurs. I really like the bootstrap story of Wyzant, I like the brilliant pivots and leadership of Yext, or the inspired socially impactful application of technology to real world problems such as FireStop, in addition to other great companies that are still in earlier stages of development and so are not appropriate for me to describe publicly.

YS: How should innovators strike that delicate balance between ‘Stick to your vision’ and ‘Adapt to a changed world’?

DL: I think many people misunderstand what ‘stick to your vision’ really means, because virtually zero entrepreneurs in the world become successful implementing their original vision exactly as they first thought of it. Nobody sticks to their pure vision and goes on to create and lead a successful company.

If you want to be a successful entrepreneur then you want to modify your vision based upon the actual input and feedback of potential customers. Real feedback, if listened to, becomes an entrepreneur's real source of competitive advantage. That said, you have to adapt what you hear from potential customers to what makes business sense, and that is where the real delicate balance lies.

YS: How should people keep themselves open for adopting an entrepreneurial career later in life and not just in youth or mid-career stages?

DL: Most entrepreneurs in the world are not young (i.e. less than 30 years old). Most entrepreneurs start companies after they have gained experience in a field that gives them confidence they can do a better job than their boss in delivering and designing and selling some product or service.

The highest success rate goes to entrepreneurs between 45 and 55 years old. Of course highly capable people in the range of 45 to 55 are also the people that have the highest paying jobs and job titles in most fields, so they become less inclined to leave their good positions to start companies -- I don't know if that is so bad. Most entrepreneurs older than 55 started their own firms out of necessity or in order to be in more control of their lifestyle.

Ultimately, to be a successful entrepreneur you need to be able to do 'something' better than anyone else, so keeping up with what are global best practices in the areas where you have experience and/or expertise is essential for keeping your entrepreneurial options open to you.

YS: How much of entrepreneurship is innate and how much can be taught formally?

DL: This is a tricky question because it depends upon how you define entrepreneurship. There are three generally different types of definitions, each with hundreds of variations, in use today.

1) Definitions related to position: e.g., you are an entrepreneur if you are your own boss, or if you founded a company, and so on

2) Definitions related to state-of-mind: e.g. you are an entrepreneur if you like risk, and/or feel unconstrained by existing ways of doing things, etc.

3) Definitions related to outcomes: e.g. you are an entrepreneur if you can take an idea and turn it into a value-producing self-sustaining enterprise.

Type 1 definitions are independent of any specific skills or traits, they depend mostly on personal agency.

Type 2 definitions are all about a state-of-mind that make entrepreneurship more of a trait than a skill and therefore hard to impact short of using major mind altering drugs or using brain-washing techniques.

Type 3 definitions describe an outcome, which by definition means they can be broken down into specific skill sets and taught. Some people may do better than others in some skill or another by virtue of some trait, motivation, or great coaching they happen to have.

I like Type 3 definitions and believe strongly that these entrepreneurial skills can be taught.

YS: What do you see as the value of entrepreneur networks and meetup groups? What can be done to make them even more efficient?

DL: This is a tough question to answer in general because I have seen some very ineffective networks and some effective ones. Each group has its own culture and the culture of the group makes all the difference in its effectiveness. I define effectiveness of an entrepreneurial network as how many successful (value producing and self-sustaining) enterprises have formed from their membership. This is a tough standard and one that takes years to measure.

YS: At a time of global conflict and environmental crisis, what can entrepreneurial leaders teach and do for the world?

DL: Entrepreneurs and social entrepreneurs have been having a profound impact on our global improvements in poverty rates, education rates and health outcomes. Billions of people have been positively impacted because the world has so many more entrepreneurs, many of them small but some of them bold and innovative, than it did 50 years ago. The world would be well advised to learn the skills of entrepreneurial leaders - their results justify our attention and time.

YS: Who are some of the entrepreneurs you admire the most today?

DL: I admire Wendy Kopp, the founder of Teach for America and now Teach for All. I similarly admire Muhammad Yunus of Grameen Bank.

I admire Sam Walton, who took a mundane business - rural general stores - and turned it into one of the world's biggest and most influential companies.

I admire entrepreneurs like Vidal Herrera, the founder of 1-800-Autopsy, who turned personal tragedy and adversity into an important business that now helps many grieving families.

I admire Oprah Winfrey who created a major media company out of nothing but determination and openness.

DL: The major myths of entrepreneurship that sway us towards making poor entrepreneurial decisions.

DL: Don't believe everything you read about entrepreneurship, few people have really studied it and most of what is written is based upon personal opinion, not research or broad expertise.

In general, the hardest part about being an entrepreneur is understanding why you want it and what you are willing to do to make it happen. Once you understand what you want then it is much easier to be focused and diligent about getting the skills needed to achieve your vision.