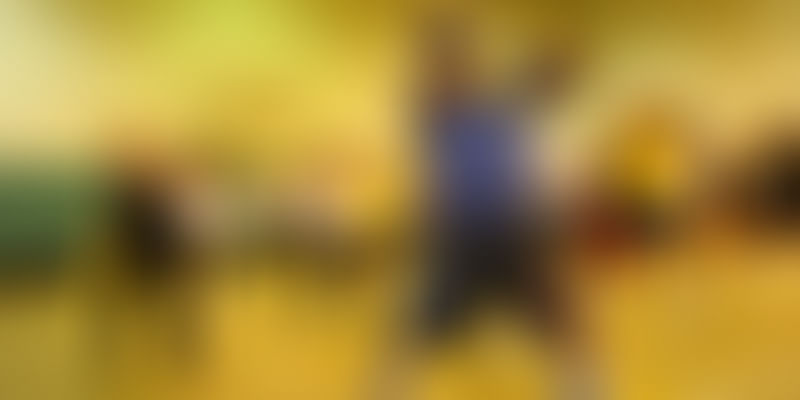 The FitnessOne chain of fitness studios is fairly well known in the South Indian states. The company was started a decade ago by Vivekanand Palaniappan, a former pilot in the US and passionate fitness enthusiast. This is the story of how this company was a pioneer and also a category creator in the fitness space, in more ways than one.

Vivekanand went to the US in 1986 for pilot training, where he stayed back for 17 years working with different airlines. As a pilot, one needs to regularly pass the fitness exams and undergo medicals to ensure that one is in good health. Further, his recurring back pain problem had been resolved through Yoga and exercise, increasing his interest in fitness. When he decided to return to India, he wanted to either continue as a pilot – a lucrative career – or to start a fitness center. After his return, he did some research on the market and the economics and decided to go forward with a single outlet. “I had no idea it would become a chain”, says the soft-spoken Vivekanand.

“Back then, India had less experience in delivering fitness from a service standpoint. Most people took the fitness equipment perspective”, Vivekanand says. In those days gyms would mean a room with a bunch of equipment. The first outlet started in September 2004 in Alwarpet.

Good quality gyms in Chennai were few and far between in Chennai and these were early days for the industry, a far cry from today when every street has a gym or a fitness studio. The first round of funding from family and friends came through at the end of the first year of operations after a bit of struggle. That helped in setting up five more centers at one go in November 2005 – three in Bangalore (Koramangala, Indiranagar, Jayanagar) and one each in Coimbatore and Adyar in Chennai.

Today, the company boasts of 45 centers, with plans to add ten more centers. Chennai has the most number of branches (25) with the rest being in Bangalore, Hyderabad and many tier 1, 2 and 3 towns of Tamil Nadu.

The customer mindset in tier 1 cities and the remaining towns is different. “In tier-1 cities there is a lot of competition now, but we have earned our share of goodwill in the market by being there for the last decade. In tier-2 and 3 towns, the citizens are simply thankful since they lack international standard gyms there. It helps that we are first movers in this space”, explained Vivekanand about the expansion strategy.

The company has not stayed focused only on creating and growing the fitness studio chain. Under Vivekanand’s leadership, the company has also expanded into the personal branded fitness equipment business. The company operates fitness equipment stores under the brand name ‘Total Fitness Stores’, which is growing rapidly as health consciousness grows in urban India. The company creates the product specifications, material quality and motor quality and then gives the order to a manufacturer abroad. The same factories also make the equipment for the top nine global equipment makers in the world. This line of business that operates under the brand ‘Propel Fitness’ has also benefited the fitness studios business.

In India, the real estate prices are a substantial portion of the cost of running a fitness studio. Given that, every gym is focused on reducing the rest of the cost elements in order to manage the profitability. With the higher control and lower costs that come with having their own manufacturing access, the company is able to optimize the gym business. Vivekanand claims, “Today, we have reached a point where equipment costs have become equal, if not less than the interiors cost. This has played a key role in us growing so fast”. Of course, the equipment is also sold to other fitness chains in addition to the individual consumers.

The second innovation that the company has been involved in is what is referred to as ‘Fitness Process Outsourcing (FPO)’. In FPO, the company takes over the complete set up, management and maintenance of gyms for corporates on their premises. This includes gym design, equipment installation, maintenance, fitness trainers and physiotherapists and complete support. Corporates can choose to retain the Fitness One brand or give it their own name. Cognizant, Standard Chartered, ABN Amro Bank and many other large corporates are clients for this business.

The third innovation was to create the Pink brand of fitness studios dedicated to women customers. The growth of these outlets has outpaced the Fitness One outlets. This sector has been a blessing in disguise since these outlets require lesser space, which helps in rapid expansion in congested urban areas. It is already the leading women’s fitness brand in India.

“My wife is the Director of Operations. She handles the day-to-day operations of the company owned centers and the customer relations of the franchisee partners. We live and breathe this business - its 24x7 and we prioritize this over everything” confesses Vivekanand, who also admits that there is no work-life balance even now. He says his sense of responsibility and self-reliance came from his long stint in the US where he flew cargo at night. These are single pilot flights, that teach you to depend on yourself for all needs. He believes that this self-reliance has helped him in setting up this chain of stores despite having no prior business experience.

The company has attracted three rounds of funding till now, including one round from Reliance Capital.

Of the 45 outlets currently, 16 are company owned and 29 are franchises. The next ten will be in the franchise model as that is the preferred mode of growth for now. The plan is to expand to Western and Northern India too. The enquiries are being looked into as and when they come in. This is a formal procedure in order to ensure quality. The company plans to grow at 2-3 centers per month.