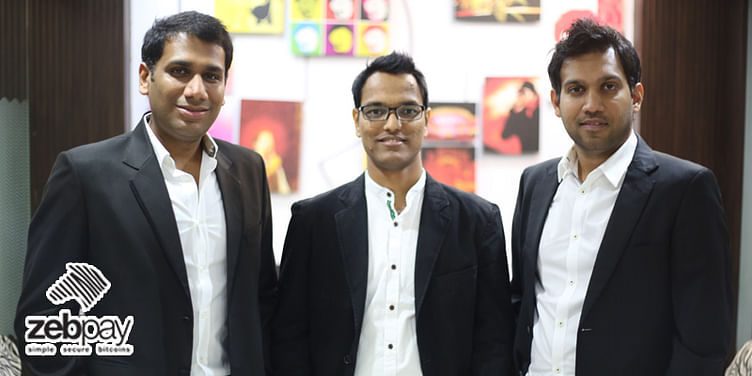 Zebpay is a simple mobile bitcoin wallet that enables bitcoin transactions using mobile number without any complexities. Zebpay is aimed at bringing bitcoins in our daily life by making it as simple as instant messaging, without the need to understand complex bitcoin addresses, backup your wallet or be scared of losing bitcoins.

Zebpay is a part of Zeb Ventures private limited which was registered in Singapore in August 2014. Its main operation and development office is in Ahmedabad, India. The company is founded by Mahin Gupta (Founder of bitcoin exchange www.buysellbitco.in), SandeepGoenka (Jt MD of Hemlines Exports and member of Indian Angel Network) and Saurabh Agrawal (Founder of Red Events).

“With Zebpay, you can enjoy the benefits of using bitcoins without worrying about the complexities. You can send and receive bitcoins simply using mobile numbers just like Whatsapp. You don't have to understand complex bitcoin addresses or worry about losing bitcoins and taking backups,” says Sandeep.

Sandeep claims Zebpay to be the first of its kind application in the bitcoin world. In the coming months, they are looking forward to partner with bitcoin exchanges and eVoucher companies. Talking about their revenue model, Sandeep says, “Users will be able to buy and sell bitcoins using their local currency from the app. They will also be able to use their bitcoins to encash them via eVouchers like e-commerce vouchers, airtime and gift cards. We will charge our partners a referral commission. In the future, we will also charge a fee to merchants using Zebpay to accept bitcoins for premium merchant features.”

There are many other bitcoin mobile wallets like Xapo and Blockchain to name a few but they all use bitcoin addresses to send and receive bitcoins. This method is much secured for large transactions and there is a small transaction fee which takes about 10 minutes for confirmation. For smaller transactions, however, this amount of complexity, transaction fee and time is impractical. And this is the segment where Zebpay serves, providing a simple service for an easy transaction in day-to-day life.

Zebpay is chosen to present among the top 20 elite group of companies at CoinAgenda 2014 in Las Vegas.