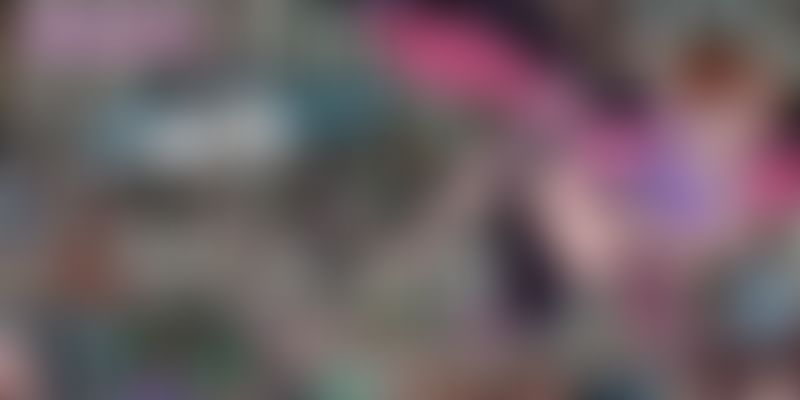 Beaver Sparker was the kind of teenager who’d be dismissed for being a nerd, until the fateful day a postman he spies having sex with a neighbour hands him a radioactive lollipop. And, so begins his journey to becoming the beaver sparker, Lick-It Man, a boy who grows up to help women experience jouissance (French for ‘enjoyment’ that is more than sexual pleasure).

“I had a really bad break up in 2004 that left me emotionally, spiritually and physically exhausted,’says Carida. “I was laying in bed one night depressed. I was thinking, ‘Gosh! I don’t have any space for an emotional relationship with a man, but wouldn’t it be nice if a superhero just flew into the window and ravaged me?’”

That is the short and sweet of our friendly neighbourhood Lick-It Man, the superhero who unlocks women’s freedoms from under their skirts.

Since, every Robin Hood needs his Sheriff of Nottingham, Sparker’s greatest nemesis is Stick-It Man. As dangerously uncomfortable as that name sounds, it isn’t the opposite of Lick-It Man. Stick-It is the evil newspaper mogul Mike Oxlarge’s evil alterego. A bully sticking it to the people, he is the epitome of all that is contentious and unfair.

What began as a silly idea in the exercise of puns steam-rolled into a metaphor for the larger narrative of oppression versus liberation and greed versus compassion, both dominant features of gender relationships.

Lick-It Man was Carida’s own jouissance moment, but it was too raunchy for many people. “I realised very quickly I’m going to have to fund this project myself.”

Lick-It Man was a short film before it became a comic, and both works are an attempt to see sex and sexuality as a political and social construct.

“One is not born a woman, but rather becomes a woman,” Simone de Beauvoir once said, an idea previously expounded by Jean-Paul Sartre through the belief that existence precedes essence.

People are inherently devoid of identity, which is artificially developed. If women are manufactured to be women, they can be anything else, too. Carida uses this stock of literature she was exposed to in her college years at Trinity College, Hartford, Connecticut to develop the Lick-It Man philosophy.

There, Carida was immersed in seminal works of radical feminists like Hélène Cixous and Catherine Clément on jouissance and what it means to be a woman. Cixous appropriates the idea of ‘jouissance’ in her works to mean an all-encompassing pleasure that is all at once sexual, intellectual and spiritual, i.e., the ultimate liberation of women. Jouissance is for all women. Virgins, too.

Mike Oxlarge, the main antagonist, is an equally nasty version of John Jonah Jameson, Jr, early publisher of The Daily Bugle from Spiderman. He’s the grumpy, parochial, patriarchal, exploitative and greedy publisher, all qualities most vaginas are rabidly allergic to. His weaknesses make him vulnerable to evil. It’s an echo of the Hearst and Pulitzer era that saw American media embrace yellow journalism and its tactics, a culture that’s influenced media everywhere in the world today. He represents a kind of “corporate colonialism” that needs to maintain abusive status quos to guarantee greater success till it consumes all its competition in order to control the popular narrative. This narrative is fairly “meh” about women. Mike Oxlarge is Rupert Murdoch, basically.

The antagonists in the book still listen to Van Halen and the Rolling Stones. They read Ayn Rand. They could just as well be members of the Grand Old Party. Whether intentional or not, they seem like men stuck in a previous century. Protagonists like the feisty red-head journalist BJ Moorehead, on the other hand, listen to punk rock, famous for rebelliously disrupting gender norms, and Pearl Jam, a grunge staple that arose in response to the excesses of glam rock bands. It’s not necessarily about reversing the narrative as much as bringing more plurality to it. It’s now time to change who mixes the batter and who licks the beater.But, Lick-It Man isn’t without criticism. As is the nature of staunch feminists to be staunchly opposed to everything, they were grumpy over Carida’s hero being a man. She responds, “I understand what they’re are saying. Sexuality and creativity are lying dormant in women, but if a man comes from a place of compassion and equality, why can’t he liberate her?”

Indeed, throughout history, men have taken up the role of liberators of women. William Moulton Marston, inventor of the systolic BP test, created DC Comics’ Wonder Woman. Against the backdrop of World War II, in 1941, she made her first appearance . Based on the women in his life, he said of her, “Wonder Woman is psychological propaganda for the new type of woman who should I believe rule the world.” A compassionate, caring, loving role model with Amazonian strength for both boys and girls living in a world torn apart by the hatred of men. Marston deliberately created a hero that was quintessentially “feminine” and indomitably powerful at the same time.

The culture Marston was challenging was one steeped cut-and-dried gender roles, where women were (are still) shamed for anything under the sky. Often times by other women. This extends to the literatures we read, the films we watch and the music we listen to. The MPAA, for instance, is symptomatic of this problem. An obsolete lobbying and trading arm of Hollywood, the MPAA has long had a distaste for overt female sexuality. For decades, this geezerocracy has devoutly acted on its eurotphobia by mercilessly censoring oral sex where the female is the recipient. It does this by holding questionable films hostage with a potential NC-17 rating (many theatres avoid NC-17-rated films). In India itself, rape scenes were less likely to be censored than consensual sexual activity.

Within this context, Carida’s intent isn’t to challenge the male gaze or vilify men for simply possessing an energetic sexuality (normal women like that), but to put the female gaze on equal footing by normalising female sexual pleasure (we like this more).

“I grew up in a Catholic family, even though they weren’t too religious. I noticed there were things boys got to do that as a girl I didn’t get to do. There always seemed to be a shaming of female sexuality and this need to control it.”

This need to control women extends beyond just their sexuality. It extends into their domestic, professional and political being.

“But, as I’ve gotten older, one of the turning points is that humour is a great way to get your point across and that found it’s way into Lick-It man.”

Carida says, “The good old boys club have the ability to work with who they want to and publish the stories they want. When they read the story, they say to me: ‘Where’s Blow It Baby?’ But, I just say, ‘You have Blow-It Baby, everyday! On television, on the internet- everywhere!’ But, I definitely had some men who felt left out, because it’s taking away what they feel entitled to in many ways.”

Lick-It Man also has the curse of literature: the tag ‘Women’s Literature’, which relegates art to a “parallel” category outside the mainstream. “I’ve learnt to have more patience. It’s challenging to deal with disappointment, but I look back to the women who laid the foundation for me to be even be able to do this,” says Carida.

To Carida, the steadfast BJ Moorehead also challenges women’s magazines and dating books that make a business of [badly] advising women on how to “keep the man” or “get the man”, a long list of things “to be” or “not to be”, a sexist “decoding” of male behaviour and rationalising this process using pop psychology.

In a weird way, Twilight, Stephanie Meyer’s literary saga, disrupted all of that. “Bella was everything the magazines tell you not to be, yet she had two men absolutely in love with her,” says Carida. “You’re not supposed to be moody, but she was. She was cranky and she didn’t care what people thought of her. The character was everything you’re not supposed to be as a woman, and she still had these two men competing for her. That’s why it really tapped into the female psyche so well.”

Bella, to this day, remains a feminist conundrum difficult to write off as sexist (she was self-determined, resolute and wilful), but certainly not our definition of feminism (she was maniacally self-sacrificing and her life revolved around men).

As to the future of Lick-It Man, Carida says, “I do have have more storylines, and I would love to do another graphic novel or an animation series that goes beyond the comic. I pitched it to Adult Swim (which is owned by Time Warner, Inc.). I’ve seen some crazy things on it, but even for them it was a little too much. But, there’s a lot of channels out there to reach more people.”

For those in doubt of whether Lick-It Man is truly a work with feminist overtones, Carida says, “Men have a strong need to be a hero. So, let’s bring out the hero in them and bring out the women celebrating themselves. Can we get to place where we don’t have power over one another, but empower one another?”

Find out more on the Lick It Man website.