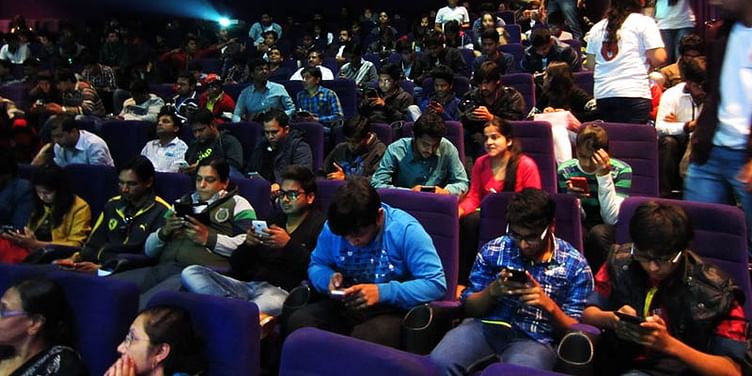 We have seen online multiplayer games, and games being played on the field. But how about playing computer games offline with hundreds of people who are competing with each other sitting together at a common venue? Virat Khutal, the Founder of Twist Mobile, tried something along these lines. On 11th January, 2015, Virat got 300 people inside a movie theatre in Indore and organized a session where everyone played games together on their mobiles. This helped instilling a sense of teamwork to achieve a common objective and also generated a huge engagement for the games that were being played.

Twist Mobile is a mobile gaming company. The concept of mass offline gaming came up when their developer account was suspended by Google due to various reasons and they decided to go on a different track.

"We started in an offbeat way because Google banned our developer account. We had no way to reach our users other than through app stores. I had a very simple idea. We wanted to connect with our users directly. No digital company or gaming company in India could dare to face 300 people with different Android version devices but we took our chance and users gave us an overwhelming response. They appreciated our efforts. People travelled more than 30 km to attend this event; some even from villages nearby," Virat explains.

To generate interest for the events the team books a venue (like a movie theater) and then creates a noise around it; they then charge a nominal fee for people to attend the event. The only requirement for people is that they have to bring a fully charged smartphone to play games. Once the user registers for the event, he can buy tickets from the website and download the game app. At the venue, wifi access is given and an event code handed out using which users can register their devices. Once all the participants arrive the game begins and people play for a designated time; scores are displayed on the screen. Based on the scores the winner is declared.

The response from people has been phenomenal; the offline model has already been proved since their show was over booked seven days in advance. Talking about scalability and competition, Virat confidently says,

"It is bad business model (for others). I think people want to sit in their AC rooms. They don't want to work in the field. When people ask me, "Is it scalable?" I have a simple answer. The movies business is also not scalable but people solved this problem. Competition will increase market size for everyone. Right now we don't see any App developer with the courage to face users packed in a room with android variant devices."

Talking about their USP Virat says, "App developers live in the box of app stores. We want to work with anyone who thinks outside the box and who wants to engage with users."

At present, most of their revenues come from sponsorships. Virat says they are focusing more on engagement than profits at present. Also, their future plan is to get this big in most cities and make sure that the big screen is dominated not only by movies but by games and other interactive tech content too.