Now you can have a say in who will run Dilli. At least in this game ! 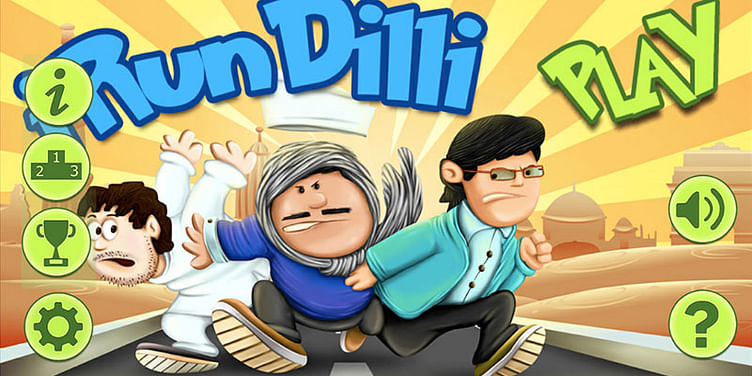 Delhi will decide its fate on 7th February 2015, when Aam Aadmi Party's candidate Arvind Kejriwal takes on its main contender, Bhartiya Janata Party's Kiran Bedi in the 2015 Legislative Assembly polls. Public debates, TV shows and political rallies are witnessing heavy participation from the voters. While the nation really wants to know who will be the Chief Minister of the 70 member legislative assembly and get the opportunity to 'run Delhi', the internet population is leveraging this situation for their own benefits. With access of opinions and the lost meaning of the first hand information, there is an extremely thin line separating the genuine discussion over the elections and the entertainment seeking debates.

Riding on the 'Arvind Kejriwal-Kiran Bedi' wave, Geek Mentors Studios has released a game titled 'iRunDilli'. This is available for both desktops and mobile phones (Android). Conceptualized by Faizal Mohammed and Naim Siddiqui, iRunDilli is designed (layout) by Raveen Sharma and coded(programming) by Mohammed Shah Nawaz.

Out of the four member team, two (Shah Nawaz and Faisal Mohammed) are also the Co-founders of the popular comic series, Garbage Bin Studios.

Related read: The artist who calls his work trash: Faisal Mohammed and his Garbage Bin Studios

When 'iRunDilli' starts, users have to select one of the three players available : Arvind Kejriwal, Kiran Bedi or Rahul Gandhi. To proceed, the players(in the game) have to run and jump over the disconnected roads and obstacles including giant hands, cops with lathi sticks and women with brooms. Most of the obstacles are symbolic representation of the parties signs and activities. The skyline of Delhi with monuments like Qutub Minar and Lotus Temple is visible in the background. Along the way, the player can collect coins, health packs and jet packs.

As soon as the player's turn is over(or the player succumbs), he or she is redirected to a 'Leaderboard' which shows the points accumulated by all the users for the three candidates.

While the timing and idea of the app is interesting, the execution is not very good. There are advertisements running on the bottom throughout and it is not possible to read the instructions clearly in some cases. Also, ads pop up between the game which adds to the poor experience and frustration of the player. The UI is very simple and does justice to what the game intends to portray. The in game design and artwork in the game will be familiar to fans of Garbage Bin's 'Guddu and Gang' series.

Another glaring error is the fact that the Congress CM candidate, Ajay Maken has been replaced by Congress VP, Rahul Gandhi in the game. (chances are that the developers have considered the popularity factor here)

At the time of publishing Arvind Kejriwal occupied the No 1 spot followed by Kiran Bedi and Rahul Gandhi. It will be interesting to see if the in-game 'Leaderboard' will show any likeness to the actual result of the Delhi elections.

You can download 'iRunDilli' from the Google Play store or play it on desktop and  make your favorite politician win now!