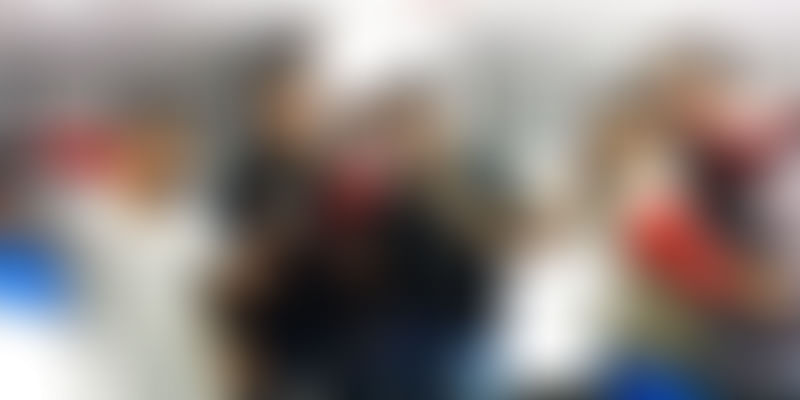 With the landslide victory of Aam Aadmi Party, there cannot be better day to feature Vinodh Kumar. Vinodh is an AAP Volunteer and has helped extensively in their Bangalore campaigns. At present Vinodh is the CTO and MD of Bloomreach India.

A hard worker and patient listener, Vinodh believed that he was good at Mathematics since childhood. He was a top ranker in school.When faced with the dilemma of choosing between Computer science or biology, the prospect of dissecting frogs was not something which appealed to him. And this would prove to be a turning point in his life as he would later go on to impact the tech world.

After his schooling Vinodh's father wanted him to focus on just one entrance exam and do it well instead of many. Vinodh chose to focus on Tamil Nadu CET and ended up among the top ten scorers. Vinodh enrolled himself into College of Engineering which later got affiliated to Anna university and took up Computer Science Engineering.

It was while studying at Anna university that he fell in love with Computers. Apart from learning programming his main focus was mainly into figuring out how things work, and to discover the answer during a time where we did not have Google. Vinodh went on to figure out the answer by building a compiler on his own. Anna University had just got a new Computer center. Students would reserve their Computers as there weren't enough of them. Though XT Computers(with 8- bit memory bus) were easily available but there was always a dearth of AT systems(16- bit memory bus).

Making his own Operating System - ViSa

To understand system programming, Vinodh along with his friend Satish (who currently works at facebook) decided to write an Operating System for a 32-bit 80386 machine. Both of them got hold of the manuals and started coding from scratch. They redirected the interrupts (INT21H) to point to their OS in order to boot it up and were rebooting the machine numerous times to check it out. This got the lab assistants suspicious but they could not figure out anything. They named their OS VISA (after VInodh and SAthish).

After engineering, Vinodh gave an interview just to get a feel of it. "It was a warm up interview", Vinodh says. He wasn't expecting to clear it as he did not have a good CGPA(it was less than nine), but he got selected. Vinodh did not join and instead decided to attempt GATE for higher studies. He got hold of question papers of last 10 years and started figuring out patterns in questions in them. Unfortunately few days before the exam one of his friends committed suicide and Vinodh was quite disturbed. Nevertheless he went on to take the exam. "The exam was really tough and I didn't attempt for around 10-15 marks", Vinodh says.

When the results came out, Vinodh could not believe what he saw, even after checking the result twice. He asked one of his friends to check his result and thus it was confirmed. Vinodh had topped the country. He had scored first rank in GATE Examination. Vinodh joined IISc. IISc was a dream come true. The atmosphere was conducive to learning with best of the facilities and professors around. It was here that he learnt the theory behind his experiments and once again went on to experiment based on what he learnt. This time he made a compiler for OCCAM language and learnt about System Architectures.

From Compilers to Networking

After IISc, Vinodh joined CISCO where he worked on EDGE Technology and filed seven patents in networking. However Networking was not something which Vinodh was excited about. "It is a protocol driven field and there is no end user touch", Vinodh says. Vinodh spent three years at CISCO before he decided to move on. Looking to change domains, Vinodh gave an interview at HP which he cleared. ButThe technical HR at HP persuaded him not to change his domain. Vinodh took heed to the HR's advice and joined Infinera, another startup which was making devices in the optical networking space. Vinodh was working on several software components including managing fault management and software framework of the system.

Post Infinera, Vinodh joined Google, his dream company. Vinodh dispels several myths about Google interviews and says that most of them were like conversations but focused on fundamentals. They did not hire for specific roles but planned on getting the right talent and then assign them to things. There was a concept of starter projects where new joinees were free to work on projects of their own. Vinodh was working on a project for Google maps where he had to convert images to vectors to speed up map rendering on clients' device. As his interest lied in information retrieval, Vinodh walked up to his manager one day and asked to be assigned to work on Google News.

Google News was initially developed by Krishnan Bharath in response to 9/11 as a central news aggregator. It was while browsing Google News, that Vinodh figured out most of the news was US specific and there was no localization. He took it upon himself as a challenge to build local versions of Google News including the Hindi and Tamil version. Vinodh extensively worked on bilingual version of Google News and persuaded Marissa Mayer to implement the bilingual version. Vinodh also rewrote the entire news ranking algorithm. During his stint at Google, Vinodh started and launched the Google India Music Search.

While working for Google News, Vinodh accidentally deleted a production table as a result of which Google News stopped crawling news sites and the site was showing stale news. There were blog posts titled "Google News is on A Holiday today". Fortunately right measures were taken at the right time and it was made functional in a few hours. There is a good philosophy at Google, "If you don't have an opportunity to break, you don't have an opportunity to build".

Made his own computer

Vindoh recalls an incident from his days at Anna university, when they built a 4-bit Computer from scratch.They made a 8-bit processor by wiring on a breadboard and using a LS7489 chip as the RAM module. There was some glitch and it was not working. But one of his teammates, a guy who used to laze off when they were building it, came and worked for four days continuously and built the Computer. It worked fine. People came to their room and saw the creation. They became instant celebrities. They decide to show it to their professor and packaged it. When the professor saw, he exclaimed, "it obviously won't work". He did not even look at it.

Vinodh spent six years at Google before he decided to startup. He went to his friend, Ashutosh Garg ,an ex googler and the CTO of Bloomreach, to discuss his plans for starting up. Ashutosh came up with an offer and asked Vinodh to start Bloomreach office in India. After much deliberation and meeting the co-founders, Vinodh decided to go for it. At present they have around 40 employees in Bloomreach India and have come up with a product, SNAP - smart analytics for ecommerce companies to provide insights around user behavior.

When he is not working on Computers, Vinodh is busy volunteering for the Aam Aadmi Party and contributing to good governance. He played an important role in getting BBMP to stop throwing waste near Mandur village on the outskirts of city which was endangering the lives of local people. Vinodh says, "From the last 10 years BBMP was dumping approximately 2000 tons of garbage everyday in the landfills, which looked more like a hill. The deadly fumes endanger the lives of people living in the villages around it". Vinodh and his team has helped implement waste segregation and solid waste management in over 800 houses in AECS layout in Whitefield.

Talking about the future Vinodh just wants to remain active and satisfied with what he has. He does not want to mellow down with age.