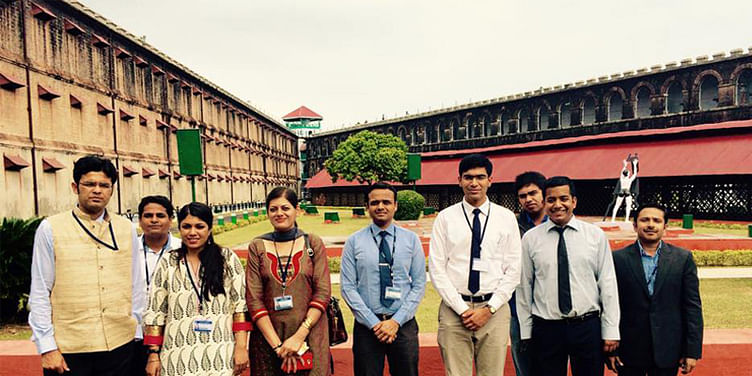 Ramblings of amusing encounters and a fascinating journey, ‘Bharat Darshan’ was a lifetime experience introspecting every bit of our country and ourselves.

The journey turned into a book with each day being experienced like a different chapter adding and becoming a part of us somehow. This real voyage of discovery started on 20th December from LBSNAA, when I along with 16 other of my fellow IAS probationers was given the privilege to travel through the vast expanse of the country.

We were indeed baffled, shocked, mesmerised and humbled by the diversity we experienced in each and every aspect of our country ranging from religion, race, food, dress, language, and culture. But, despite that, a sight of the Tricolour being hoisted on Republic Day celebration in Left Wing Extremism (LWE) affected district of Dantewada reminded us that a sense of patriotism and Indianness still underlines the entire nation. So, the mind can never break-off from the journey which made us see different colours of our country.

Each place we visited unravelled differently, from the snow-clad mountains in Jammu to the serene beaches of Havelock in Andaman, from the scorching heat of Chennai to the shivering cold of Rajouri, and from the extreme dangers of LoC in Jammu (like during the night patrol amidst firing) to the leisure time we spent at the fairy-tale land of Goa. We not only dined in the finest restaurants with rare aged wine, but also had a community lunch in a ‘langar’ in a gurudwara.

Starting with the 10 days with the Indian Army in Jammu, we learnt how planning things out and being highly disciplined makes us more efficient in whatever we do. Unfolding our own myth, watching reconstruction of the old Mughal Road in Jammu, we experienced that creativity can fix anything. The plight of our soldiers facing death at every moment of their duty, yet never ever complaining, not only gave us a sense of pride and joy but also forced us to develop similar work ethics when we ourselves are appointed on duty as officers. The firing of AK-47 and INSAS with our own hands was a unique experience which reminded me of the saying that power truly flows from the barrel of the gun.

The eternal bliss felt after visiting Sri Harmandir Sahib (Golden Temple) at Amritsar or withthe serene, calm and tranquil environment pervading the entire premises of Saibaba Temple at Shirdi, added wisdom and peace. The spectacle of the ceremony of flag retreating at Wagah Border with us joining thousands of our compatriots in cheering our jawans made us more patriotic and embraced the true Indian in each one of us. Visiting various governmental organisations private sector enterprises, NGOs, armed forces and many other places made us understand how things work and even opened our eyes to some harsh realities about which we will contemplate in the future.

Some positives included Jain irrigations at Jalgaon where we witnessed thefacility of food processing, irrigation, biogas and solar plant. The exhilarating experience of touring through the entire life of Mahatma Gandhi at Gandhi Teerth, Jalgaon, enlightened us further about Gandhian ideology and legacy.

In the Mumbai naval attachment, we visited INS Tarkash, an amazing piece of battle ship mounted with big and powerful weaponries, including BrahMos. We followed this up by visiting the inside of the submarine and experienced the claustrophobic feeling there. We relived the history of the dockyard and also got the opportunity to see the ultimate warrior of Indian navy, aircraft carrier INS Viraat.

The pristine beauty of the seascape, its unending beaches and the rhythmic pounding of the sea in Goa gave us immense pleasure from the hectic schedule while travelling. The experience of witnessing the torture institution, Cellular Jail, also called Kala Pani was amazing. Now turned into a national heritage monument, the light and sound show was fantastic. It is a massive construction with 700 cells and seven wings, which brought unimaginable pain, horror and torture on Indian freedom fighters for more than 50 years. But they never gave up, fought against all odds and gave us this beautiful life.

Besides the Central Jail, we had a good time in Andaman and Nicobar Islands visiting many beaches, Port Blair, Indian coastguard, Raj Niwas, the House of Lt. Governor, and Havelock Island.

As we moved further, we had incredible experience in Bidar learning from the Indian Airforce and visiting local places in this historical town. We travelled to all the major places of Bidar in two hours, including the mesmerising Fort Bidar, Sri Narasimha Swami Zarni Cave Temple, Ashtur Gumbaz (tombs of Bahmani Kings) and Gurudwara Sri Nanak Jhira Sahib surrounded by complete calm and tranquility.

In Sirpur, a historical town of Mahasamund in Chhattisgarh, we saw the sculptures at Tivardev and Bodhvihar, depicting scenes from the ‘Jataka Tales’ and visited the spectacular Laxman Mandir. We got an opportunity to visit a rice mill where workers showed us the process of dehusking. We also learnt about their PDS system.

The experience of watching the flag hoisting on Republic Day at LWE Dantewada was very moving. We followed it by playing cricket in a flood-lit stadium at Dantewada, and I ended up winning two man-of-the-match awards for both the matches which made me very pleased.

After visiting the largest waterfall of India, Chitrakoot waterfalls, we went to various historical places of Orissa like Khandagiri and Udaygiri caves, Dhauligiri Shanti Stupa, Konark Sun temple and sculptures in Puri. We also had an opportunity to visit the shrimp processing plant in Bhubaneshwar. The majestic view of the receding sea at Chandipur beach, Balasore, provides a beautiful sight with lots of fishermen walking five to10 km everyday to pick fish and other valuables.

The journey took us through Kolkata and Ranchi, finally culminating in Lutyens’ Delhi at the historic Darbar Hall, President’s estate, with great domes and magnificent column.

Who said we are not a developed nation. As far as the historical and cultural heritage of India goes, we are more developed than any other country in the world. It will first completely overwhelm the observer and then mesmerise them by its beauty. At the end, I just want to say that I will always relish this long, fulfilling albeit arduous and by some means a perpetual journey, which shaped my mind, anchored my identity and influenced my beliefs.

“One’s destination is never a place but a new way of seeing things.”

Just as Swami Vivekananda undertook a long journey across the length and breadth of the country for over three years in search of the soul of India, just as Mohandas Karamchand Gandhi, a young barrister, found a new destination in India’s freedom struggle after having travelled to every nook and corner of the country, we have realised that travel has in it an immense potential to transform.

At the end of eight weeks of travel and togetherness, we not only witnessed some of the harsh realities out there but also unravelled the true, all-embracing Indian in each one of us. It has been a process of making India our own in several ways, in our own unique ways. Lest we forget we also had a helicopter vision of the enormity of responsibilities that we as administrators are to take on tomorrow.

Rumi once said travel brings love and power back to oneself and this travel surely did more than anything else -- love for our country, love for one another, and love for our fellow Indians.