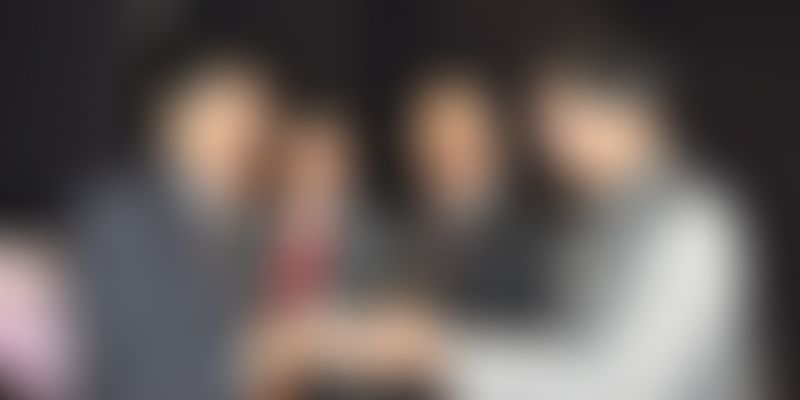 “My siblings and I were the first ones to be educated in our family. I remember walking 15 km bare feet to school every day,” says Sunil Khandbahale, creator of the path breaking free online multilingual dictionary khandbahale.com.

Hailing from a small village near Nasik, Sunil Khandbahale began his education at the age of seven and completed his schooling from a Marathi medium government school. Sunil reminisces, “During those days there was limited awareness about the importance of education since there were no schools in my village. We had to go to a school in another village and we weren’t even rich enough to afford English medium education.”

A farmer’s son, Sunil understood the importance of education early, and worked hard to score high grades. He was a good student and went on to do a diploma in instrumentation engineering. “I had wanted to become a painter, but my family was very keen that I become an engineer or a doctor,” he says.

During his engineering education, Sunil faced the language barrier. Since he had come from a Marathi medium school, he felt totally lost in the English curriculum. “Everyone around me would converse with each other and the professors in English. I was so bad at English that once, while filling up a form; I accidentally put my gender as female. This was the state of most students who came from vernacular medium schools.”

The real challenge came when Sunil had to give his tests in English and failed all. “I had given up completely and had even packed my bags to head back home, but I couldn’t bring myself to do it. My family had all their hopes and expectations set on me, and I didn’t want to crush their dreams,” he says.

That was when Sunil was introduced to the dictionary. “A kind and helpful professor lent me a dictionary and taught me how to use it,” he recounts. He started marking words in his book and cross-referencing them in the dictionary, thus learning meanings and usage of English words. Gradually, h started writing his notes in English and was one of the four students who passed the test.

“I never thought I would be one of the qualifiers; but when I saw my name on that list, it gave me immense strength and courage. I realised what a great tool the dictionary was and if other students from rural areas could use it too, they could easily realise their educational aspirations,”

Sunil created a dictionary of around 30,000 words and distributed copies in the campus. He then created a booklet which was more time consuming and costlier. “I realised that it was not convenient for people to carry booklets around so I decided to create a digital dictionary,” he says.

However, since Sunil had no idea about computer programming he decided to enroll in a programming course. He was asked to leave immediately since he could not pay the fees. “I had offered to work for them in any capacity in lieu of fees but they refused,” he says. However, he was determined to learn so he moved into a small 10|10 room, borrowed an old computer from a friend and started teaching himself programming.

Because of sitting continuously over long periods of time, Sunil unwittingly injured his back and had to undergo surgery, after which he was advised not to sit for long periods. “Nevertheless, I continued to study. I would lie down on the table and place the system on the chair,” he smiles.

It took him six months to come up with software for a Marathi online dictionary. He now wanted to replicate this and make it accessible to the public. “That was how khandbahale.com came into being. I didn’t want to name it khandbahale, but all the other domain names like online dictionary etc were taken. In the middle of the night, when I happened to type khandbahale.com, it was available; so I just registered it,” he reminisces.

The dictionary was registered but this still did not make it accessible to the people who needed it in rural India. “There is this big internet divide and not everyone has access to computers. I then learnt mobile program development and ensured that over 100 khandbahale dictionary apps were available on phones. I set up an SMS service called Dictionary on SMS.”

As the popularity of this dictionary grew, Sunil started receiving requests for dictionaries in other languages as well. “I started looking for subject experts and linguists and began creating dictionaries for different languages. The khandbahale dictionary has over 22 different Indian languages and I am planning to expand into more languages across the globe. We have a user base of over 100 million people across 150 countries; I want to reach one billion by 2020. The idea is to create a bridge across countries, cultures and people through language. Only then can we truly become a global village. This dictionary can be used by students, translators, homemakers; everyone,” says Sunil.

Sunil has also created a lingual fraternity network that works towards creating easy universal exchange through language. He is working on real-time language translation software that will enable the speaker to talk in his or her mother tongue and the listener will understand the words in his or her language. Sunil is also part of the NGO Global Prosperity Foundation that works at educating the youth of rural India and does projects with young graduates of rural India. “I truly believe that necessity is the mother of invention; you just need to follow your dreams and passions,” says Sunil.