From funders to founders, 5 Indian investors who’ve started up 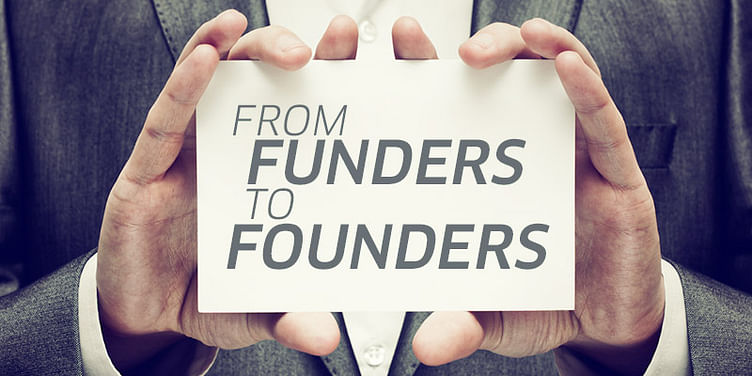 Entrepreneurship is a trait which is very hard to suppress. There is something exhilarating about the experience that keeps entrepreneurs driven, all the time. And the energy is infectious, affecting all involved in the startup ecosystem. And investors are a key part of this ecosystem.

The Indian startup space is in top gear right now and there is a lot of support for entrepreneurs. Opportunities are plenty. Investors, who have been entrepreneurs previously, bring in a bigger value-add for their portfolio companies. Thankfully, this breed of investors is growing. But alongside, we’re also seeing a lot of investors who’re themselves diving into the startup arena by starting a company. Here, we look at some of the investors who have recently started up:

1) Rajesh Sawhney, InnerChefRajesh Sawhney is a serial entrepreneur who donned the investor hat when he started GSF Accelerator in 2012. He has helped many companies accelerate and has personally invested as well. Very recently, Rajesh launched InnerChef which has a mission of helping people #EatBetter. As they put it, “InnerChef is an online food discovery and delivery experience that will make the chef in you come alive.” InnerChef does the shopping, chopping and other preparation before delivering a box to the customer who in turn can cook and eat. Currently in beta with a few corporates in Gurgaon as clients, InnerChef will be opening to the NCR region soon. Talking of the startup, Rajesh says, “Food Tech is a huge opportunity. There are so many ‘need gaps’ in the market. I am lucky to be a co-founder of an awesome team of five founders. I think we have a huge mission "#EatBetter" which is inspiring.”

2) Abhishek Goyal and Neha Singh, TracxnAbhishek Goyal has been an entrepreneur for a good part of his career but moved on to the other side when he worked with Accel Partners for three years. He recently got together with Neha Singh, previously a VC at Sequoia Capital, to launch Tracxn. The company tracks and curates start-ups across the globe making it easier for VCs and others interested in various sectors to evaluate the companies. Say, a Gartner for startups. Based out of Bangalore, the company has been active from June 2013.

3) Gautam Balijepalli, CartPerkGautam is a partner at Ojas Venture Partenrs, a $35m VC fund backed by NS Raghavan, one of the Infosys founders. Gautam is a lead angel investor and board member at Vizury, Telibrahma, CoCubes and other ventures. Of late, mobile and app world (CartPerk) are keeping Gautam busy. CartPerk is in its ver early stage, and enables CPG brands to run retailer-independent loyalty programs over multiple shopping trips and rewards users directly by leveraging their smartphone.

4) Satish Kataria, CatapoooltSatish has experience of about 15 years across various sectors, including public relations, brand management and PE/VC investment management. In 2013, Satish launched Catapooolt, a crowdfunding platform in India. Previously, he was the managing director at SpringBoard Ventures and has also served as the Vice President of Religare Venture Capital Limited. Understanding the challenges the conventional funding structure has in India, he actively pursues evolving funding mechanisms globally and this is what led him to starting up Catapooolt.

5) Manoj Gupta, CraftsvillaManoj is the founder of Craftsvilla, a luxury brand in handcrafted and greencrafted products. The company was founded in 2011 and it claimed to be profitable by 2013. Craftsvilla has been lying low in terms of media but seems to be picking up steam according to traffic tracking websites. Before Craftsvilla, Manoj was the Principal at Nexus Venture Partners for four years and more recently, in 2013, he founded Dreamers Early stage fund which has invested in Klip.in, Tookitaki and Kwnech.in.

Apart from these, there are many instances now where investors don both hats. The above list is more focused on people who have been full time investors for a while before venturing out to startup again. The likes of Vishal Gondal with Goqii, Zishaan Hayath with Toppr are examples of entrepreneurs who also invest in promising startups.

This trend is a very healthy sign for the ecosystem and will definitely play a positive role in building global technology companies from India.