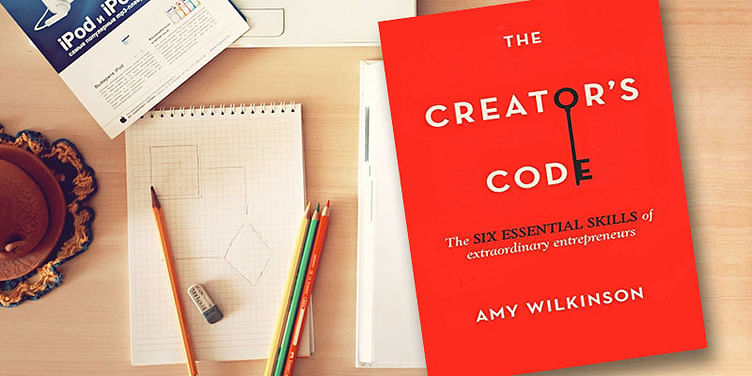 A little daring and discipline can go a long way, and entrepreneurship is accessible to everyone, Wilkinson begins. “Creators discover what ignites them, then fuel their efforts with a sense of mission,” she says; this does not necessarily call for an MBA or years of experience.

Her interviews are with entrepreneurs whose companies generate at least $100 million in annual revenue, or social enterprises that serve more than 10,000 people. The research was conducted over a period of five years.

Wilkinson’s 229-page book is a good blend of research and storytelling and makes for a compelling read. Here are my takeaways on the six entrepreneurial success factors and case studies in the book.

Spot opportunities that others don’t see, a vacuum that can be filled, a need which is unmet, a pattern that has not yet been detected, or a connection which has not been made. There are three kinds of entrepreneurs in this regard, driven by natural curiosity and alertness.

2. Focus on the horizon

Focus on the future, and lead with your vision of what is possible. Set a fast pace, reflect on your moves but don’t indulge in too much nostalgia or obsess with the competition. Examples here include Hamdi Ulukaya, a Turkish immigrant who created the popular Chobani yogurt in the US; Joe Gebbia and Brian Chesky, founders of AirBnB; and Elizabeth Holmes, founder of clinical testing firm Theranos.

“Creators build toward where they are going, not where they are. They are never complacent. They move quickly to build the next thing,” says Wilkinson. “Creators scan the edges to identify fringe ideas that might move mainstream,” she adds. There is no time for regret; mistakes should be admitted and converted into lessons for the future.

Once the opportunity and mission have been set, it is time to learn to learn and adapt through iterative experiments, faster and smarter than the competition. Cultivate ‘situational awareness,’ interpret the market and customer, make rapid decisions, take decisive action, and then loop again with ‘flexible persistence.’

Examples include PayPal’s rapid pivots across offerings and business models. The team members carried on these principles in their own successive startups, such as LinkedIn, YouTube and Yammer. Having an organisational culture of debating, openness, respect and trust is critical here.

Accept that mistakes will happen, but develop resilience via placing small bets and setting a ‘failure ratio.’ Learn to interpret setbacks as a new approach for success. “It’s neither fun nor comfortable, but failure is necessary,” cautions Wilkinson. “Failure provokes learning. Self-awareness is crucial,” she adds.

Creators need to be “brutally honest” with themselves about their failures. “Even the world’s greatest talents rarely succeed on their first attempt,” says Wilkinson; this applies to entrepreneurs as well as artists and musicians. Success calls for having a “growth mindset” of expanding outside one’s comfort zone or limitations by gathering new skills and allies. “The biggest failure of all would be refusing to try,” Wilkinson explains.

Examples here include Opower (home energy reports to increase conservation awareness), Google (70-20-10 formula for management focus on core, adjacent and new interests), NetFlix (backing away from a tweak to its DVD business model) and David Neeleman (moving on from JetBlue to Azul).

Also see my reviews of the books ‘The Wisdom of Failure’ by Laurence Weinzimmer and Jim McConoughey and ‘Fail Better: Design Smart Mistakes and Succeed Sooner’ by Anjali Sastry and Kara Penn.

Unleash generosity and strength in your network by being generous yourself. “Cooperation is contagious,” says Wilkinson. Generosity begets generosity and sparks collaboration; this does not have to be altruistic, a small gift by a founder can be good enough in the spirit of cooperation.

Examples here include LinkedIn founder Reid Hoffman, who has ‘gift guide’ principles to decide whom to give to, how much to give, and how to interact. P&G wants to be seen as a ‘gracious partner and fair competitor’ and passes on technologies to its competitors if they do not fit into its current plans. “Generosity is also a skill,” explains Wilkinson.

When all these six skills come together, magic happens: customers become evangelists, employees turn into loyalists and investors back the company beyond short-term expectations, says Wilkinson. The book is also packed with other humorous definitions, such as ‘Ramen profitability’ (when you have earned enough to pay rent and eat Top Ramen noodles!).

The book has a number of useful and inspiring quotes, and it would be good to end this review with some of them:

“You have to see failure as the beginning and the middle, but never entertain it as the end.” – Jessica Herrin, Stella&Dot

“Paypal was quite an extreme learning experience.” – Peter Thiel, Palantir

“You have to get good at failing.” – Dean Kamen, Segway

“The ability to learn faster than your competitor may be the only sustainable competitive advantage.” – Arie de Geus

“Running a startup on any given day, you’re sort of yo-yoing between euphoria and terror and getting used to it.” – Drew Houston, DropBox

Amy Wilkinson (Twitter: @AmyWilkinson) is an entrepreneur and lecturer at the Stanford Graduate School of Business. Her career spans leadership roles with McKinsey & Company and JP Morgan and as founder of an export company. Wilkinson has served as a White House Fellow in the Office of the US Trade Representative and as a senior fellow at the Harvard Kennedy School.