Getting girls to play ball is tough. Kumar Abhishek's 'Bend it Like Beckham' story 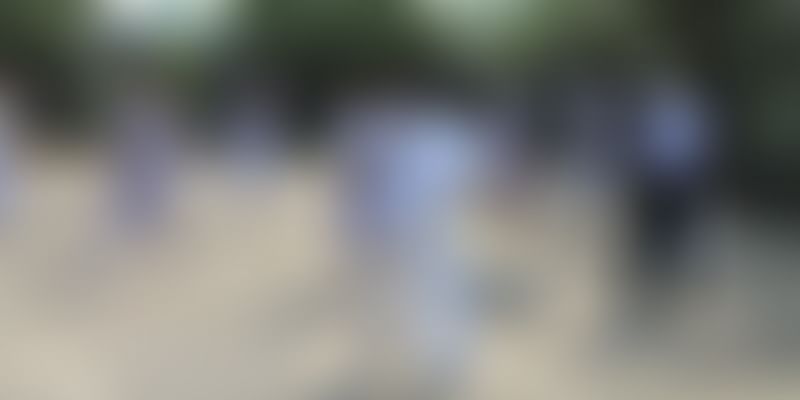 For 26-year old Kumar Abhishek, sports means more than just sweating it out in the field. An avid sportsman himself, he learnt at an early age that ‘all work and no play makes Jack a dull boy’. “For me, excelling in sports was as important as securing first position in the class. It was not only about bringing home medals…a lot of it had to do with incorporating the spirit of sportsmanship into my value system,” says Abhishek.

A decade later, he joined the Gandhi Fellowship, which exposed him “to a world where education meant nothing more than monotonous learning from prescribed textbooks. The goal of learning remained unfulfilled as there was no holistic development taking place.”In the last year of fellowship, he was intensively engaged with the group of students in Ahmedabad, trying to generate positivity through sports.

“I was primarily working with children from the community residing around Arvind Mills in central Ahmedabad. The social repercussions of 2002 riots were too apparent in the way the Muslim community was ghettoized and were made to maintain minimum contact with the other neighborhoods. What was fed into children’s innocent psyche was too dangerous, which worried me.”After building a friendly rapport with his students, Abhishek tried to bring them out of their localities to play with children of adjoining neighborhoods. The kids welcomed the idea, and what started off as an experiment, brought positive results.

In 2012, Abhishek started Khelo India to make sports a common ground for development by crossing the barriers of social, cultural and even gender differences.The idea was two-fold—to revive people’s interest in the lesser discussed, indigenous sports played in the subcontinent, like gilli-danda, kanchey (marbles), patang-bazi (kite flying) and pitthu; and to create a triad between the recreational, aspirational and developmental aspect of sports.Having immense faith in the idea of the ‘sportsman’s spirit’, he set out to explore the potential of sports in bringing a positive change in the lives of the people.

What flagged off Khelo India was Ultimate Frisbee. A team game played without a referee, the self-regulatory feature of the game promised much more than just team-building and recreation.That the game does not test the relative stamina and endurance of the men and women players was something which appealed the most to him. “All you need to have is the sharpness and efficiency to throw the Frisbee off, and mixed teams are allowed,” says Abhishek while explaining the reason behind starting off with this sport.

The children of the neighborhood and the Gandhi Fellows offered to play a part. The expected results came as a pleasant surprise and he got enthusiastic participation from both the genders. The biggest moment of joy came to him when one of the Gandhi Fellows from a conservative Muslim family decided to remove her burqa and hijab and came out to play with other team members. “That was the moment when it went beyond sports. It became the metaphor of shedding off the inhibitions and coming out of the social cocoon,” he says with a twinkle in his eyes, which speaks volumes about the gargantuan transformation sports can usher in people’s life.

But, the challenges were many. “I understood that the involvement in sports is not only limited to financial position of one’s family. A lot of it has to do with the society’s attitude towards sports. Sports is often seen as a leisure activity, or as the option for the ones less interested in studies. Hence, ‘padhoge likhoge toh banoge nawab, kheloge koodoge to hoge kharaab’ (study hard and you shall achieve success; squander off your time in playing and you would grow up to be useless) is a phrase taken too seriously in our country,” quips Abhishek. While the parents in metropolitan cities happily send away their kids to learn sports as part of hobby classes,families living in small cities and towns still feel it’s a waste of both time and money to encourage their children to play.

Gender also brings a host of other multilayered complexities. Getting out girls to play was a different ball game altogether.“The convincing part is never smooth, a la Bend It Like Beckham. Girls are constantly compared with their male counterparts for stamina, endurance and zeal. I feel most of the times, they are just psychological constraints and the girls lack none of these.”

Ultimate Frisbee had proved it right; and the other step was to further try it out with groups of thirty children each in different setting in other states. One was Khirki Extension, a lower middle class neighborhood in the vicinity of Saket, New Delhi while the other was with the kids of the children home in Mankhurd, Mumbai. Both these settings had a different socio-economic context and the engagement lasted for six months each. And, it is this positive response which has shown Abhishek a ray of hope for the future. “For me, the project would head in the right direction if children would learn in group instead of learning in isolation. Peer learning is a wonderful thing, as we get to understand and learn the maximum in real-life situations. Sports present numerous such opportunities when people act and react according to their quintessential nature”.

Khelo India is just a stepping stone. What he looks forward is to create a fourfold learning development system wherein learning through reading and active participation should follow an individual’s development through sports.The plan is to engage with each group of students for five years using a continuous development assessment method. Gender sensitization, social harmony and active awareness of and participation in the governance mechanism at the grassroots level are what Khelo India has as its prime objectives. And he feels that no one could help him better than the fellow youngsters. “Nobody can usher in a difference as passionately and zealously as young people. The desire to see the smile of change on people’s faces (and the sweaty brow) is what kept me going, and is what inspires my team”.

To join the cause and kickstart the ballgame of change, visit www.facebook.com/kheloindia

About the Author: Mohini Mehta is pursuing her masters in Social Work from Tata Institute of Social Sciences, Mumbai. A bibliophile who breathes poetry, she is deeply interested in performing arts and has been involved with creative writing, editing and translation with Gandhi Smriti and Darshan Samiti, Stephen’s Centre for Translation and literary journals and newsletters.

(The views and opinions expressed in this article are those of the author and do not necessarily reflect the views of YourStory.)