MY STORY: This man quit his plush job to teach hockey to underprivileged kids 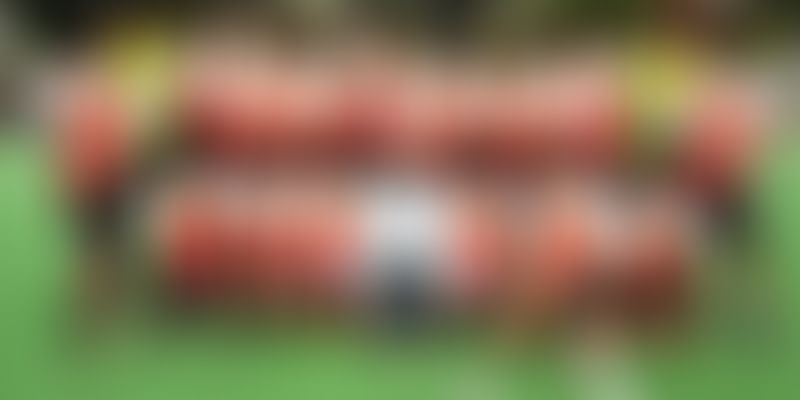 K Arumugam — a walking hockey encyclopaedia — is a man on a mission, and in a hurry. Born in a nondescript village in India, he studied at IIT and authored a dozen books on his favourite sport, India’s national game–hockey. A geologist by training, a few years ago he left his lucrative job and a career in journalism to chase his dream of providing underprivileged children with a new orientation, hope, and progress.

In 2008 Arumugam started One Thousand Hockey Legs (OTHL); an NGO that visualises a career for underprivileged kids aged from 11-15 through sports. The organisation provides children with hockey training at their schools,thereby encouraging regular school attendance and an interest in both sports and academics. Seems like a simple task, but in practice it needs a great deal of work to realise the objective.

OTHL provides free hockey training, as well as a monthly scholarship of Rs.500 for students who top their class in academics. Presently, it is largely funded through the strained pockets of the founder. Arumugam feels that the urban poor are poorer than the rural poor, and their schools, mostly government ones, have no proper playgrounds. Seen against the reality of poor quality of teaching, he says the kids are virtually idling in schools on working days and in parks on holidays. “In schools, they are confined to the four walls, so to say. There is a need to get the kids hooked to something useful which can motivate them. What better tool than sports,”argues Arumugam.

The OTHL was put on board after India failed to qualify for the Olympics in 2008–a tragedy for our national sport that has gotten only a single Olympic gold so far. Six years down the line, OTHL successfully runs programmes in 80 schools across five cities in India–Delhi, Kolkata, Chennai, Kanpur and Puducherry. Sports, Arumugam feels serves a double purpose: “It develops the child’s personality while at the same their talent is nurtured professionally to revive the glory of hockey, which is now on a downhill and needs immediate course correction.”

An exemplary story from the OTHL initiative is that of Rahul Gharai, a rickshaw puller’s son, who had been a trainee at the NGO in a Delhi Bengali settlement. When he joined the hockey team he was in the sixth standard. During a game he was playing with the OTHL team, the principal of a top school of Delhi noticed him and got him admitted to his institution.

Says a smiling Rahul: “Mein bahut khush hun ki mujhe aisa mauka mila. Mein ab padaai aur hockey dono mein dhyaan lagata hun.(I am happy that I got such an opportunity. I can now concentrate both on my studies and hockey.)” Recently, 14-year-old Rahul has been selected for the state team for the junior national hockey championship.

In Delhi alone, 24 schools have well-established hockey teams and playgrounds and as Arumugam points out: “These schools never had a hockey team or a playground fit for playing before.” In 2014,OTHL won the Hockey India President’s Outstanding Achievement Award.

A visibly proud Arumugam says in conclusion: “The number of boys graduating to play for the state in national school games, inter-zones and age-group teams is increasing.I hope to see more and more boys and girls from our stables knocking the doors of the national team.”

The author, Gaurav Saxena, has a major in Physics and is a sports enthusiast. He has been a hockey player in his college and likes blogging and travelling places.