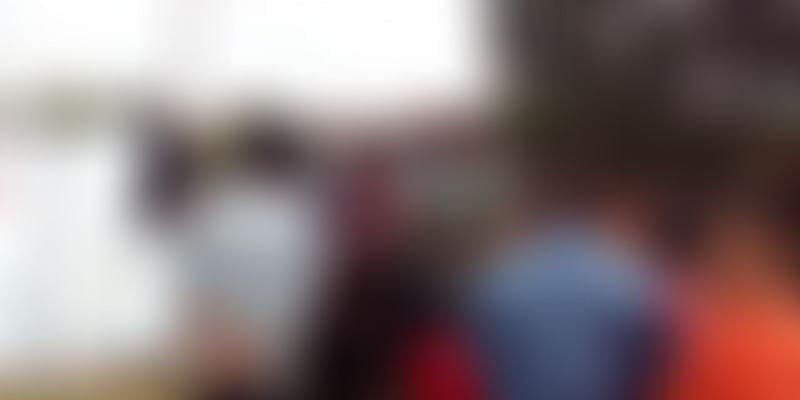 “There are natural calamities happening all the time. When the recent one struck Uttarakhand, I felt this strong pull to go and help but for some reason, I couldn’t do it. But when it again happened in our neighbouring country Nepal, I had to go,” says Rajat Dhariwal, who in his everyday life runs MadRat Games, a company that designs, manufactures and distributes board games that help kids learn. Before MadRat, Rajat was also a teacher at the Rishi Valley School along with Madhumita Halder. The duo later got married and co-founded MadRat Games.

Always socially conscious, Rajat had full support from his family and team when he decided to go to Nepal. The earthquake of magnitude 7.8 on Richter scale (as per USGS) struck Nepal on April 25, 2015, and Rajat saw a drone video about it on May 1. This is when he made up his mind. But there were questions — Where can a person go? International NGOs were discouraging volunteers to come because they were becoming more of a burden than help. He did not know if it really was the case? He also did not know what kind of help was needed?

Rajat started his research and it took him two days to make up his mind. He contacted all the major NGOs working in Nepal and he was advised not to come. “I didn’t know if they already had enough help?” recollects Rajat. He was clear that he shouldn’t just land there, and that a plan of action was necessary. He then contacted a few small local Nepali NGOs, one of them being Nepa: Gyration. Run by a few young volunteers trained in Disaster Relief, the group had a huge challenge in front of them. Not only were their houses destroyed, they also had the responsibility of helping the people around them. Nepa: Gyration agreed to take the help offered by Rajat.

The damage has been far reaching. Some regions have 20% of the houses destroyed while some have 90% destruction! Nepa: Gyration operates in the region called Kirtipur near Kathmandu. “My research showed that tents were needed the most and that is what the NGO told me as well. The day Nepa: Gyration agreed, I booked my tickets, got hold of a few tents and was on my way,” says Rajat. Meanwhile, his entrepreneurial instincts kicked in, and he started the groundwork making plans for rescue and rehabilitation work.

Once in Kirtipur, it was clear that a lot of help was needed. The other NGOs also asked for help once they knew someone was serious about offering help and had supplies. Working with the Nepa: Gyration team, they were helping out a few families but a lot more was required. Rajat got in touch with Goonj whose founder was also in Nepal and they collaborated to formulate a plan so that around 1000 families in Kirtipur could be helped. This would require around INR 30 lakhs in funds. “I called my old friend Varun of Ketto and with their help, my team at MadRat had a crowdfunding campaign up and running,” says Rajat. The campaign has reached 50% of the target and has a few more commitments from other people but they still require around INR 10 lakhs.

They are currently a group of 15-20 people but someone with managerial skills is required to distribute the supplies efficiently. They have also been collecting the latitude and longitude of the houses they’ve helped and have it all marked on a map open to public. “There is a lot of work in front of us and I want to make sure I see one full cycle from receiving the funds to distributing them,” says Rajat. There are challenges like deciding which families need more help and co-ordinating efforts with other volunteering efforts and of course, there are still small tremors hitting the region. Rajat advises that if anyone wants to help out, it is best to figure out a roadmap before reaching Nepal.

Here is a detailed plan of their action can be seen here. One can donate on the crowdfunding page and for any more information, can reach out to rajat@madratgames.com or madhumita@madratgames.com.