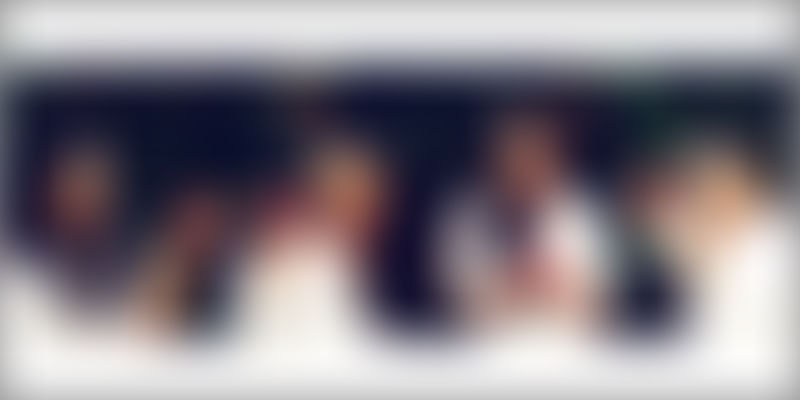 Through the ‘OMG you are a woman, and you can make someone laugh?’ reactions, Richa Kapoor and Sumukhi Suresh, India’s young, budding standup comedians, are making a mark in a globally male-dominated realm.

“It’s so good to know that now women can cook and be funny.”

“You were so funny that I can’t ask you out for coffee! It’s my job to make you laugh right?”

These are just a few reactions that Richa and Sumukhi have received. Sumukhi even received a message once from someone who shared a relative’s matrimonial profile, saying they would love to have an entertainer in the family.

HerStory spoke to the ladies with a funny bone to know more about their journey together into the world of standup comedy — a road less travelled by our gender — to break the perception that women can not make people laugh.

Richa and Sumukhi met at Centrestage’s ‘The Improv,’ an improvisational comedy show. Richa had already been part of the show for two years when Sumukhi joined.

“We started doing improv together, and realised we are such different, yet weirdly similar, people,” says Sumukhi. “In such a space, we’ve realised our biggest strength lies in the commonality of our experiences,” adds Richa.

When Sumukhi met Richa, she was planning to conduct theatre and experience workshops for kids. Sumukhi joined her in conducting their first workshop together. “This made us understand how we worked as a team.Thanks to a good amount of nudging from our friends Kenneth Sebastian and Prateek Prajosh, we decided to write our own sketch show and stage it,” shares Sumukhi.

Several shows later, they decided to make things official by starting their own YouTube channel named ‘Sketch in the City.’

Both girls like to talk.Though they may be different in many respects, they connect over different things, and feel strongly about the same issues. Their content is born off chats and discussions they have over the phone most evenings after their regular work hours are over. In their characteristic style, they chime in, “We are hoping to connect via dreams- just to save some time during the day.”

Richa and Sumukhi’s blood boils while people wonder how two women can make people laugh, or whether they ‘have it in them.’ However, they understand that the only way to make this doubt null and void is to ‘perform and perform’ like its their last show!

Initially, they worried about reception, technicalities, style of humourand addressing a mixed audience at different venues. Ready to embrace the victories and pitfalls, they pushed themselves on to this platform.

However, some challenges will persist, like late evening rehearsals, public exposure and private image. But what matters according to them is one’s ability to deal with these challenges. They’ve not inhibited themselves, either.

We improvise irrespective of being on or off stage. We enjoy getting embarrassed, and love what would make any person mortified! Our fascination to act instead of ‘thinking into’ certain matters connects us, as people who risk it every single time. We have sold brooms at traffic signals, Eve-teased on roads (satire), jumped on walls and screamed our lungs out in the most ‘classiest’ of gatherings.

Raised in Nagpur, Sumukhi calls herself a confused Tamalayali who was the bullied fat child in school. She’s glad they did not have prom night then,for she would have been scarred for life. At home, she was

the youngest,so lived a sheltered life. “My silliness in school, my self-pity for my appearance and this weird need to be insecure for the heck of it has surprisingly made me confident to the edge of dominating/annoying.”

Into theatre since 2006, she first started experimenting during her graduation days in Chennai. Her journey with comedy began as an improv performer, then sketch comedy and finally into standup comedy.

From a five minute monologue as Shrek for a college event to her first commercial play ‘Retell’ to a compilation of six short stories by Satyajit Ray and Ismat Chughtai, where she played the role of an 80-year old quirky Afghani traveller, made her realise that she was not awkward playing any role, and could work as a comedian.

Sumukhi hero-worships her father- a sauve and witty man from whom she draws a lot of inspiration. She is thankful to her friends and family, who push her to do better. They never hesitate to mock her when she pities herself, or ground her when they feel success is getting to her head.

Richa, on the other hand, has had the privilege of travelling across the country, meeting new people every two to three years during her formative years. Her early steps towards theatre began with inter-school dramatics fests. “These competitions gave me a space to explore certain aspects of my personality that blossomed on stage, and surprised me. It was only then I realised that it was a blessing to be on stage. I found bliss standing before a hundred people, and enjoyed the nervousness before every performance.”

Richa is an English teacher, currently pursuing her Masters in Literature, after which she plans to get back to teaching. “Stage will be my life-long love,” she says.

Richa’s used humour to surpass a lot of difficult situations in her life. From there, it turned into a habit to get laughs out of people. “I was told a number of times that my ‘callous’ attitude would get me nowhere. Eventually, it did.People recognised this as a talent, and I saw myself performing before a thousand people.”

Richa has put herself in uncomfortable positions just to get out of her comfort zone; attended workshops; talked about almost anything that made her feel challenged. “I am still in the process, and I learn from every risk I take. There is something maddening in the unknown, and I gather the courage to experience that.”

She has a great support system in her family and friends, who are always there for her.

As a nation,we don’t laugh enough and definitely not at ourselves.

According to Sumukhi, the country is laughing, but the source of that laughter, for the majority, is the usual wife jokes, women jokes, women driving jokes, annoying girlfriend jokes, cross-dressed men jokes, and if not all of these, then sex jokes. “This has to stop. I think there has been a small beginning. Hopefully, we will move towards being a nation where comedy will be used as a tool to talk about unsaid and uncomfortable topics, and a comedian will not be afraid to say it,” says Sumukhi.

As a nation, Richa feels we have to become more informed as a country. We need to learn to accept views thatdisrupt our own. She says, “The need to listen and comprehend is essential. The idea of being sensitive seems a bit overused, and maybe we should learn to come out of such sensibilities, irrespective of our gender and ‘age gap.’ An attempt to speak out on issues that affect us collectively, not hegemonically, would make a great beginning!”

While Richa and Sumukhi draw inspiration from various issues and subjects, Richa draws especially from her Punjabi family and our patriarchal society. Sumukhi is a huge fan of sports and politics.

Richa say, “Take the step; make a fool out of yourself. Do it for yourself, or your ‘species,’ for nothing else will seem more liberating after that! Do it now!”

Sumukhi adds, “Stage fright is the best thing for any performer. It keeps you on your toes to do well. Start believing that you might just have it in you to be the funny one!”

Richa signs for the duo with this message: “As long as we are aware of our goal,the question of obstacles becomes dormant. It is in moments like these you derive strength from yourself. You should be your biggest strength every single time!”