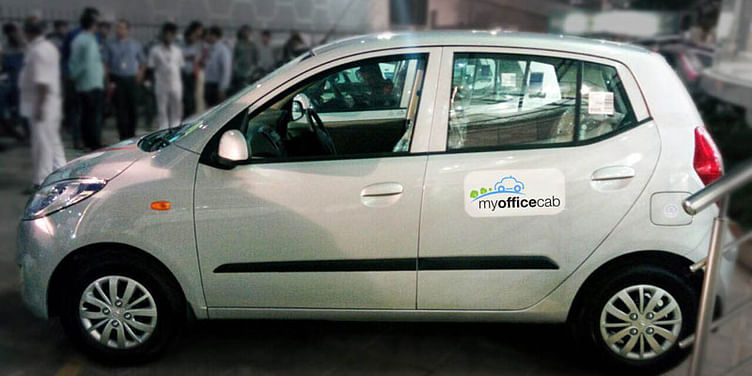 One of our big priorities,as office goers, is making sure we head out at any time other than peak traffic hours. Being stuck in traffic for hours on end, caught up in endless slow traffic races, inhaling petrol fumes is something that one would want to avoid. In order to help people do so, myofficecab was established. According to Bhaskar Chavda, Co-founder and CEO, myofficecab, less than 30 per cent of employees who are offered company transport take it. This, he says, means that many people are on the road, increasing both traffic and pollution. "And not all companies can provide transportation to their employees,' adds Bhaskar.

According to Bhaskar, the reasons for not availing of company transport and companies’ not providing transport isn’t the cost. He adds that it is because of the lack of a reliable and trustworthy vendor. Myofficecab wants to remedy this and provide most companies with their transportation needs.

He says: "Our fleet will include LPG, CNG and electric vehicles. We are going about this not by buying vehicles, but by building an ecosystem where people buy these environment-friendly vehicles and attach them to our company. We also have software, which helps in routing of vehicles, so that utilisation of vehicles is maximised, hence reducing both pollution and traffic on the road."

Apart from this, myofficecab also provides cab pooling for those employees that do not take company-provided transport, or those who don't have the option to do so.

During their coffee break, colleagues Bhaskar Chavda, Vinod Kumar, Sailas Nulaka and Prashanth would talk about the common challenges they faced with their team. The biggest point that came up during the conversations was the fact that employee productivity was impacted by transportation. Bhaskar says that while most people complained about the traffic and pollution, they did little to combat it.

They decided to leave their comfortable management jobs to startup."The key reason also was that we saw that the solution to both these massive problems (pollution and traffic) was feasible and in our reach. That’s where the idea of myofficecab was conceived," adds Bhaskar.

Bhaskar says that while most of their struggles were similar to that of any startup, they faced other problems, like needing to meet with several different government officials, in order to understand their requirements and get the needed agreements. He also says that currently, they are looking to build a strong team and also reach out to VCs.

Currently operational in Bengaluru, the team plans to expand to Chennai, Hyderabad and Pune shortly. "Our traction so far has been really good, we were happy to see the positive response we received from various (more than 20) IT companies. It includes companies of all sizes, i.e. small, medium and large," adds Bhaskar.

He also adds that all their vehicles are fully utilized, and more companies are reaching out to them. Apart from this, there are more individuals who looking at cab pooling, and more car owners who are interested in purchasing environment friendly vehicles and attaching them to myofficecab.

The website started early June this year. The team launched with five vehicles. Bhaskar says that this month there will be a mela for drivers interested in attaching their environment friendly vehicles to the organisation. The mela will be held along with vehicle manufacturers and finance companies. Minjar Cloud Solutions and Nalashaa Solutions have tied up with myofficecab.

In order to ensure complete safety, all myofficecab vehicles are fitted with GPS devices, apps for employees, drivers, and admin staff for companies. "The irony is that transport management departments in software companies don’t have any software solutions. We are providing them with software for efficient route management and live tracking of vehicles," adds Bhaskar.

The vehicles also feature a panic button, and the employee apps too come with a panic button. Apart from background checks, drivers undergo training based on the rules and regulations of the Bengaluru Traffic Police.

Bhaskar says: "We treat our drivers as employees. We have provided training to our drivers on soft skills, business etiquette and customer service, the way IT companies provide training to their employees. Our customers have so far been happily surprised with both the good behaviour on the road, and the courtesy in conversation that our drivers have displayed so far."

According to Bhaskar, one of the biggest USPs of myofficecab is the fact that they focus more on the B2B aspects. Apart from the same, since myofficecab provides ecologically friendly cabs, they have been able to reducecarbon emission by 100,000 grams. "For the amounts that our vehicles still produce, we will plant one tree per cab per month, to not just cover what was left, but make the environment even better," adds Bhaskar.

Myofficecab has a flat rate per trip, within Bengaluru city limits. "This has resulted in drivers focusing on ensuring employees reach office on time. They are not interested in increasing the number of kilometers travelled, and thus they do not increase their drive time. We plan to have a similar flat-rate model for cab pooling, where the cost reduces with increase in capacity utilisation," says Bhaskar.

For myofficecab, every company that provides and even doesn't provide transportation is a target. According to sources, the total addressable market is close to $10 billion. Bengaluru’s itself is close to $ 4 billion. Apart from regular cab companies, car pooling is fast picking up in cities like Bengaluru.

"We are working with entities based in Singapore/Germany to get electric taxis which can run 200+ km on full charge, and that can be charged within 30 minutes. We will also add bigger vehicles, including CNG and electric buses," concludes Bhaskar.