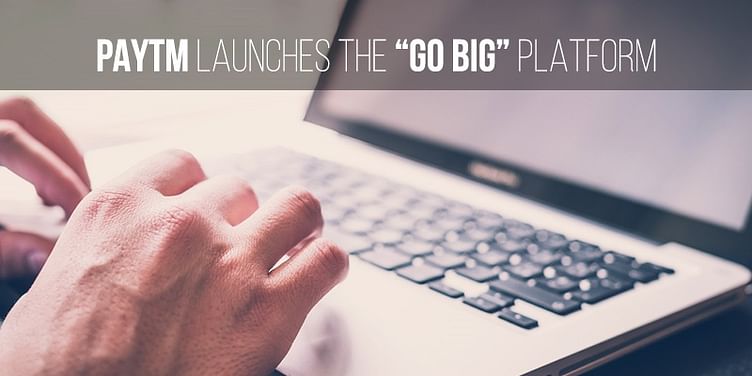 While addressing a press meet recently Vijay Shekhar Sharma coined an inspiring quote ‘go big or go home’. With motive to do something big for merchants, today Paytm has announced it will be investing $100 million (INR 640 crore ) into its “Go Big” platform.

The initiative will enable more small and medium sellers to come on board easily and leverage the benefits of selling through company’s marketplace.

Leveraging the new platform, merchants will have access to services such as content writing, cataloguing, online marketing and imaging. The platform primarily targeted towards improving merchants profit by solving skill-based pain points.

Speaking on the launch of the platform, Renu Satti, VP- SME Business and Operations – Paytm said,

We believe in enabling and empowering small merchants with technology and marketing. In the same spirit, we have created a GoBig portal and listed Paytm partners who can help a small seller to sell and scale business in any part of the country. We offer to fund initial expenses of creating catalogues and give free marketing credits to merchants to get traction on online commerce.

Paytm already has 600 listed service providers who can assist sellers in various aspects of online retail. It also plans to expand its team of service partners to 10,000 in the next 5 months. Prior to Paytm e-commerce giants Flipkart, Amazon and Flipkart also launched similar initiative to enrich merchants skill.

In June this year Flipkart announced ‘Apne Sapne Jee Kar Dekho’ campaign to aware and educate SMEs about the advantages of leveraging Flipkart’s platform. During the same time Amazon announced ASPN (network of third parties) to bring merchants on its platform.

The Soft Bank funded - Snapdeal was early mover in financial assistance of sellers and had launched Capital Assist in August last year. The Delhi based company had enabled more than 150 of its sellers to raise over $8 million (INR 50 crores) through the initiative.

On the lines of e-commerce peers, Paytm will also soon launch its warehousing facility for its sellers. In the first phase, this will cover 50 cities and will be rolled out to 100 cities by the year end. After Alibaba backing Paytm has been busy launching several initiatives to grab major seller base. Earlier this year it came up with the ‘Seller App’ with a zero commission model.

Besides product based commerce, last week the Noida based company launched travel marketplace (starting with bus).