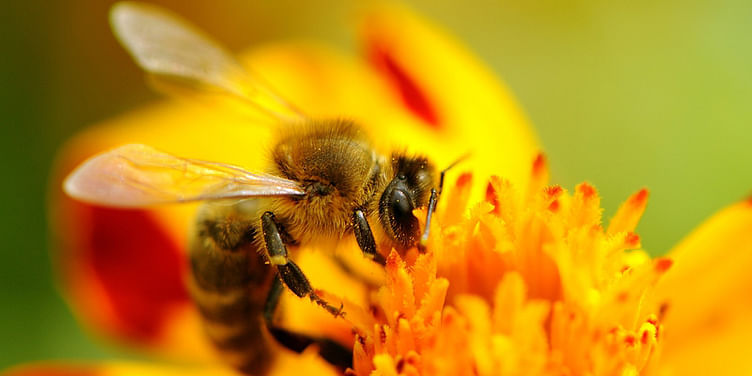 Deeply disturbed by farmers committing suicides, management graduate Shrikant Gajbhaye hit upon an idea to help increase their agricultural income with the help of natural bee pollination. Gajbhaye’s social entrepreneurial venture “Bee The Change” is a profit venture that promises to increase agricultural yield and subsequently incomes of farmers by making use of bee pollination. During his study years at the Indian Institute of Management, Kozhikode, the entrepreneur took up a five-day hobby course on bee keeping in Pune and “learnt some of the most amazing facts about bees,” that led to the venture.

Hailing from Vidarbha a region that has witnessed many farmer suicides, Gajbhiye says the vicious cycle of debt is one of the primary reasons for farmers choosing to end their lives. “Farmers take loans to buy chemical fertilizers, the use of which deteriorates the soil fertility, demanding the continued use of these chemicals. The farmer is thus trapped in a vicious cycle of debt, poor soil fertility and ostensible government support. “Bees are important crop pollinators. When bees are used as crop pollinators, several cross pollinated crops like bitter gourd, capsicum, cow pea beans, tomatoes, mangoes, apples, cucumbers, melons, sunflower and mustard witness 20 to 200 per cent increase in their yields,” he explains.

Using a top-down approach, the venture reaches out to the village sarpanch or educational institutions in a particular region and further communicates with the farmers and tribals to train them. “We have a team of bee-keeping experts including a veteran bee keeper, entomology experts and research scholars to train the farmers”, he says. The training is a three-day affair, which includes classroom lessons on the biology of bees and details about the functioning of bee colonies besides practical demonstrations.

Maintaining hygiene in the colony and protection from external agents is also taught. “Once the training is done, we arrange for bee colonies for the farmers. We also provide them support as and when required. The farmers can then rear the bees in their farms”, he says. Gajbhaye’s venture also addresses the problem of the decreasing bee population, which is also a major concern for environmentalists.

“Bees not only act as a source of honey, but also play a major role in the food cycle. An estimated 70 per cent of edible crops are pollinated by bees. So if bees happen to vanish from the surface of this earth, the entire ecosystem would collapse. They are essential for the survival of the ecosystem,” says the entrepreneur.

Farmers in various regions across the state of Maharashtra like Khopoli, Sindhudurg and different villages in Vidarbha have already been roped in in the project. “We have been able to create a few success stories, as a result of which, a lot of farmers in the surrounding areas are willing to go ahead with us”, he says. Currently the initiative is seeking funding in order to be able to buy bee colonies for their farmers. Crowdfunding for the venture is likely to begin from August 15, Gajbhaye says.