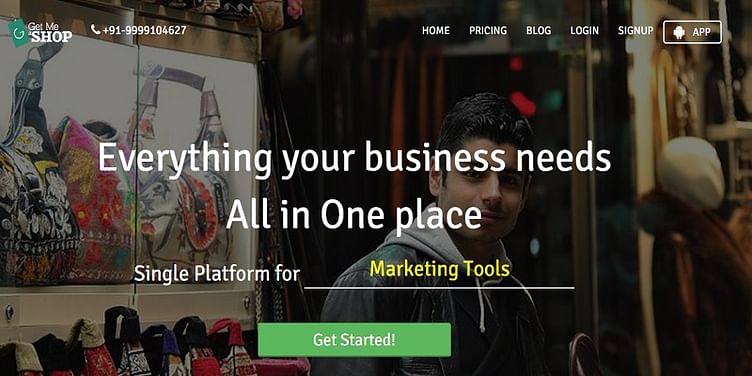 Pushkal Srivastava has always had entrepreneurship on his mind. While at college in IIT-BHU, Pushkal had been working part-time and all his summer and winter vacations have been spent in internships - eight in all. “I started my first company in third year at Entrepreneurship Cell which was into e-learning. Later, I got placed at Oracle on campus and sought to explore how bigger tech organisations worked before I could venture out on my own,” he says.

During late 2012 and early 2013, while Pushkal was at Oracle, he noticed a lot of emails in startup groups about setting up e-commerce ventures. He figured that there were many pain points exclusive to the Indian ecosystem. To tackle some of this, GetMeAShop was born with a modest aim to help small businesses have their own online presence and more. Working with Oracle, Pushkal moonlighted to get the MVP off the ground with a few clients. Off to a good start, the company also got into TLabs accelerator in August, 2013.

All this while, the founding team comprised of Pushkal and his juniors from college whom he hosted at his apartment in Hyderabad. The team coded all night and then Pushkal would leave for work at Oracle. Initially, the focus was on giving e-commerce stores to businesses but they realised that it was just one piece of the puzzle. “We figured that there are multitudes of services available across different platforms - point of sale, web portal, e-commerce store, CRM, analytics and marketplace management,” says Pushkal. People who wanted to go online were intimidated by the complexity of solutions and were at a loss of how to make them all work together seamlessly.

“We pivoted to make ourselves not just an e-commerce enabler but one providing ‘everything a business needs, in one unified platform’. We have developed the complete technology in house,” says Pushkal. The product includes an e-commerce engine built from scratch, point of sale system, multiple marketplace management suite, CRM suite, marketing tools and an in-depth analytics platform. “This helped us cater our customers better and be in a unique position to offer unparalleled range of products under one roof,” he adds.

In its current avatar, GetMeAShop helps offline sellers have a mobile-based, omni-channel retail solution. With a mobile app, they can not only set up their online store but sell on multiple marketplaces (while managing from a single dashboard), capture customer data, keep their complete inventory in sync across channels (even offline via POS) and have in-depth analytics on their inventory, sales and customer inflow.

GetMeAShop has a monthly subscription model based on services used. Just like Amazon Web Services is for infrastructure, GetMeAShop is for small businesses to pick and choose whatever services they want and pay on a subscription basis. “Right now we’ve clubbed the services into four tiers starting from Rs 499/month to Rs 7000/month. We have over 600 customers on the platform,” says Pushkal.

An engineering heavy team, GetMeAShop has nine members. As the CEO, Pushkal has written a lot of code himself and still continues to do so when time permits. “Most of our processes are automated and we have been able to serve our customers to their delight. With our customer feedback, we rapidly iterate and deploy new versions, sometimes multiple times a day,” says Pushkal.

The space where GetMeAShop plays is heating up. NowFloats is bridging the online-offline gap, companies like Zepo and Apptuse are also helping more sellers come online and investor interest is also increasing. The marketplace giants like Flipkart and Amazon are also going full speed on building tools and processes that would help their sellers. As for GetMeAShop, the company is tackling acquisition as well as investment offers. “We are bootstrapped since launch and contemplating both scenarios. Our goal is to be able to scale quickly and help as many businesses as possible,” adds Pushkal.