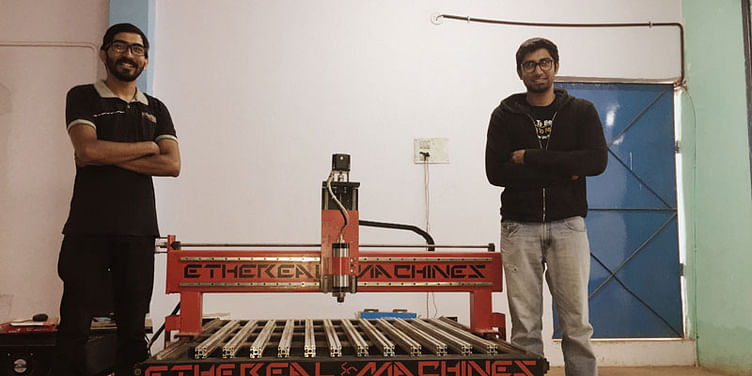 Kaushik Mudda and Navin Jain graduated from RVCE Bangalore in 2014 as engineers in the field of electronics and communication. In their final year, the duo already had jobs in their kitty. Kaushik had got through to KPMG, a dream job for many. But a year earlier, in their sixth semester, the duo had started working on a pet project which kept their minds and hands full. “Navin and I used to build small robots and hovercrafts while in college,” Kaushik told me over an email while pitching his startup. While working on these machines, they realise that they needed more precision in their cut parts to make their robots better. They needed a CNC (computer numerical control) router for that but the cheapest machine in the market was about INR 6–7 lakhs. “Since we couldn't afford this high price, we decided to build our own machine. We have never looked back since then. What started as a solution to our own problem has ended up becoming a solution for our clients as well,” recounts Kaushik.

This was the genesis of Ethereal Machines. But there were roadblocks along the way.

First, they had to give up their jobs in order to pursue their dreams. Second, but more importantly, they had to convince clients that a couple of college grads can make machines that would satisfy their needs.

Taking the plunge, Ethereal Machines got their first office in a garage the duo could borrow from a friend. After building a prototype and confirming their hypothesis, they set out in the market looking for orders. The proposition was that Ethereal Machines manufactures the most cost-effective CNC routers in the market. The duo claims that manufacturers all across India face problems while trying to customise the machines according to their specific requirements. Ethereal helps them address their varied needs and provide technical support as well. The machines can be used to etch/carve/engrave any kind of 2D/3D designs on wood, marble, granite, plastic, etc.

Out in the market, rejections awaited. “I went through 63 rejections before I bagged my first order,” says Kaushik. A client once threw them out of his office when he realised that they were still in the final semester of college. “One client rejected us simply because he had tried his hand at the same and failed miserably,” says Kaushik. At the time of initiation, Navin and Kaushik did everything, from sweeping their 280 sq. ft. garage space to changing in to become sales people when a client turned up. During their 64th meeting, they finally got an order. Over the past months, Ethereal Machines doesn’t have any big names when it comes to their clients list but the business has been good. “I am proud of the fact that we help individuals become entrepreneurs with our machines. Clients start their own businesses like marble engraving, wood carving, precision marking and cutting, suppliers for interior designers, etc, after buying our machine,” says Kaushik.

Their machines cost in the range of Rs 2–4 lakhs and the duo hasn’t spent a single penny on marketing. “It has been difficult for us to bring up a startup based in the field of mechanical engineering when startups from the field of IT and services rule the roost,” says Kaushik. Their business relies on the deep technical knowledge the duo has gained by building these machines from scratch. People who import machines from abroad find it extremely difficult to get technical support in India and that's a point where Ethereal manages to score better. Taking a broader view, the market is dominated by China make machines. Customers have an uphill task when it comes to learning how to use the machine and if any problem occurs. “Our machines have different technology and designs created by us. This makes our machines more user friendly. Also, customers don't find difficulty in understanding the machine as our engineers sit down with them for hours and train them,” says Kaushik.

Based out of Bangalore, Ethereal now has a team of six engineers. Trust is the biggest factor they need to build and that’ll come over time as word of mouth spreads. The company strives to keep upgrading and improvising the machines based on the feedback and complaints. Ethereal has four machines in different states of India and the plan is to keep growing steadily. “I want to setup at least one machine per state and soon start aiming at different districts in these states. I have also been getting a couple on enquiries from the Gulf and our neighbouring countries such as Sri Lanka and Nepal because they don't trust Chinese machines. We hope to put out machines in these markets as well in the near future,” concludes Kaushik.