India, US collaboration can help mankind at large - Richard R Verma, US Ambassador to India 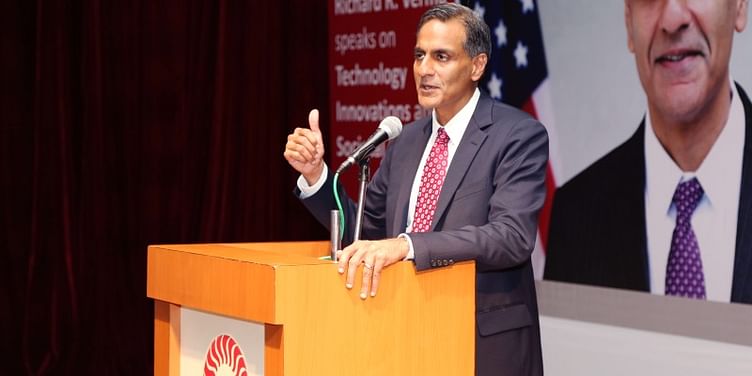 The power of collaboration between India and the US can transform different aspects and sectors not only in India but also in America, said the US Ambassador to India, Richard R Verma, at IIM-B on Wednesday, Nov. 4. "I have spoken before about the relationship between our two countries as an alliance for global prosperity, but I ask you to imagine the possibilities if this alliance were to unleash the combined creativity of our young thinkers for the good of humankind," adds Richard.

Oh what is Heaven but the fellowship

Of minds that each can stand against the world

By its own meek and incorruptible will?

Richard added that the collaboration between the two largest democracies of the world is like a fellowship of minds. Reiterating Prime Minister Modi's words Richard added that the the great promise of the U.S.-India relationship lies in 'youth, technology and innovation -- and the natural partnership of Indians and Americans in advancing human progress.'

Innovation is the keystone of collaboration according to Richard. Collaboration today doesn't necessarily have to be through long arduous journeys. Unlike a few decades back, today ideas and discussions of issues can be easily discussed between Indian and Americans via the Internet.

Another example cited was of the 'Jaipur Foot' which worked in collaboration with design engineers from the Valley.

"Back in 2009, before innovation and startups became the buzzwords that they are today, our governments established the U.S.-India Science and Technology Endowment Fund," says Richard.

Seeded with an endowment of RS640 million at the U.S. Embassy, the fund partners with India’s Department of Science and Technology to issue yearly calls for proposals for up to 2.5 crore rupees.

To date they have funded over 18 proposals including technologies to remove toxic arsenic from groundwater in Bengal and Bihar, a solar electric tractor; a low-cost portable auto-refractor to prescribe corrective eyeglasses in areas without eye doctors; a device to resuscitate newborn babies who can’t breathe; seed treatments to improve stress tolerance in crops; and many more ideas are in the pipeline.

Collaboration to encourage startups and entrepreneurs

Richard added that during the recent Strategic and Commercial Dialogue in Washington D.C., the Indian and US governments agreed that in 2016, they would launch a private sector-led innovation forum to encourage and help scale innovation and entrepreneurship.

The United States has also been a strong supporter of Prime Minister’s “Start Up India, Stand Up India” initiative to encourage entrepreneurship among India’s youth, and facilitate start-ups across India.

Calling for a greater collaboration between entrepreneurs in India and the US, Richard said that several Indian entrepreneurs have been able to create successful business ventures in the US and American entrepreneurs too are one looking to build enterprises in India.

In his address Richard said, "In the opening decades of the 21st century we stand at an inflection point in human history, a juncture of great opportunities but also one of great peril. Many of the tools that allowed for global industrialisation in the last century - such as antibiotics, fossil fuels, pesticides - are now threatening the very habitability of our planet. Unless we resolve to bring to bear the full creativity of the human spirit to address these challenges the advances we have made over recent generations may be in jeopardy".

Taking the example of the physics concept critical mass, which is the minimum amount of contact needed to sustain a chain reaction -Richard added that the habits and synergies of collaboration cannot be complete without bringing the educational systems closer.

"Once these ties are established the inherent talent of our youth will propel discovery on its own, but we are not there yet and this is an urgent task for our governments," added Richard,

While there has been a 40 per cent increase over the last year in the number of Indian students applying to study in the US, Richard believes this exchange should be both ways. At the moment, far too few American students encounter the rich traditions of Indian scholarship and the ingenuity of its society.

"The next Infosys or Apple is just as likely to be founded by a graduate of a community college or vocational institute as by an alumnus of a world famous university," says Richard.

Richard added that while many would dismiss Indian traditional medicines and systems as incompatible with Western medicine, American scientists and pharmaceutical companies are working with Indian partners on “bioprospecting” - examining traditional medicine as a source of new drug discovery.

He said that close to 40 percent of mainstream pharmaceuticals were derived from plant-based traditional medicines —drugs like aspirin, morphine, the cancer drug taxol, and the anti-malaria drug artemisinin. "Given the great promise of this collaboration our governments are discussing ways to partner Indian traditional medicine and U.S. expertise in research and drug development to improve the health of people of our countries, and the world," said Richard.